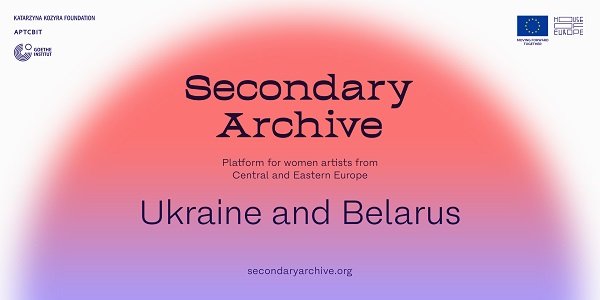 February 23, 2022, 70 artists from Ukraine and Belarus joined the Secondary Archive project – a unique initiative on a European scale that responds to the problem of the lack of visibility of women from Central and Eastern Europe in recent art history. The secondaryarchive.org platform is designed not only to show the work of artists from this region, but also to create a place where they can speak for themselves. Statements of three generations of artists from Ukraine and Belarus contain stories of wars, successful and unsuccessful revolutions, reality of the Soviet regime, everyday life of the ‘last dictatorship of Europe’, the role of female artists and the strategies of resistance they can undertake. In a context of growing international tensions, the exchange of experiences and solidarity with women from the threatened countries, is extremely important.

The digital archive, which currently contains hundreds of statements, examples of works and essays, was created thanks to the cooperation of the Katarzyna Kozyra Foundation with international partners.

Ukrainian and Belarusian art for a long time remained unknown to the international audience. Belarus is in a particularly difficult situation, as currently there are no state or private institutions where contemporary artists can present their works. The country, which had been experiencing a kind of “cultural thaw” since the 2010s, has been brutally cut off from the rest of the world in the last two years. In response to the massive anti-government protests, the last independent cultural entities have been shut down, a significant part of the cultural representatives have left the country, and some of them remain imprisoned.

The war in Ukraine, the protests and political repression in Belarus, the situation on the border and the specter of another conflict emerging from Russia – all this has had a huge impact on the local art scene in recent years. A mass movement of politically and socially engaged art has arisen, the role of the artist in society is changing. Local female artists are attracting more and more attention, and their works are beginning to be shown at exhibitions abroad. However, this often does not go hand in hand with real interest in their works, but is rather a polite gesture of support or a kind of fascination with local exoticism. By presenting their art without proper context, history and understanding, they are once again deprived of the opportunity to express themselves.

The Katarzyna Kozyra Foundation and its partners have been working for two years on showcasing artists from the region and the history of their practices. Secondaryarchive.org is a space where they can speak for themselves – both by creating statements and presenting their works. From the beginning, the name of the platform was a delicate provocation and a word paly referring to the position of women as representatives of the “second sex” and the secondary role that was attributed in the past to the countries of Central and Eastern Europe in relation to the so-called “first world”. Residents of the countries of the former Eastern Bloc educated according to Western models most often know more about the history of the West than about their neighbors. In the light of the threats facing the countries of Central and Eastern Europe today, it is necessary to know the common past, share stories, facilitate dialogue and build support networks within the region.

The platform, which last year gathered hundreds of profiles of artists from Poland, Hungary, the Czech Republic and Slovakia, is now expanding its borders. The archive will be joined by fifty artists from Ukraine and twenty from Belarus. Implemented thanks to the joint effort of local curators, artists and coordinators, the project includes artists from all backgrounds – emerging, young, unknown, as well as those with an established position. It includes testimonies of e.g. Tetiana Jablonska, one of two Ukrainian women-artists representing the Soviet Union at the Venice Biennale, Iryna Pap, the most famost woman reportage photographer in the USSR, or Alla Horska, who was murdered by the regime in 1970 for her political views, as well as key contemporary Belarusian and Ukrainian artists such as Marina Naprushkina, Lada Nakonechna, Vlada Ralko, Ala Savashevich, Zhanna Kadyrova and many others.

“Secondary Archive – Platform for Central and Eastern European Women Artists: Ukraine and Belarus” was carried out by the Katarzyna Kozyra Foundation together with partners – the Artsvit Gallery (Ukraine) and the Goethe Institute in collaboration with the Ambasada Kultury (Belarus). The initiative is supported by the European Union under the House of Europe programme.

“Secondary Archive – Platform for Female Artists from Central and Eastern Europe: Ukraine and Belarus” is supported by the European Union as part of the House of Europe program.

Eight painters have been selected as finalists for the Bethesda Painting Awards, a juried competition and exhibition produced by the Bethesda Arts & Entertainment District. Over 200 artists from Maryland, Virginia and Washington, D.C. submitted work to the annual competition created to exclusively honor regional painters. The top prize winners...

Montpelier Arts Center is saying goodbye to Horse, the sculpture, as it rides out to the pastures of its new home at the Show Place Arena and Equestrian Center in Upper Marlboro, Maryland. Join us for this exciting celebration of the departure of our metaled equine beauty, and be on the lookout...

Craig Kraft Studio is excited to announce the first recipient of our series of Small Project grants for District Artist. Redeat Wondemu is an Eritrean-born, Ethiopian-American photographer who captures portraits of women in Ethiopia in a series called “Modern Muses,” dealing with matters of beauty standards, inspiration and representation. Wondemu makes large...

The largest allocation in the agency’s history includes funding for pandemic recovery, arts education, and general operating support for nonprofit arts and cultural organizations The DC Commission on the Arts and Humanities (CAH) is now accepting applications for fiscal year 2023 grant programs. Funding is available to support projects from...

A recent campaign by the Smithsonian American Art Museum’s Renwick Gallery to acquire artworks by leading craft artists has brought more than 200 objects into its permanent collection. The Renwick Gallery 50th Anniversary Acquisition Campaign, begun in 2020, focused on artworks made by a broadly representative and diverse group of...