The Glen Echo Park Partnership for Arts and Culture (the Partnership) has formed a collaboration with Future History Now (FHN) to bring to life a mural on the grounds of Glen Echo Park that will celebrate the 100th anniversary of the Park’s Dentzel carousel. The mural will depict and celebrate the carousel as a place of fun and childhood memories, as well its role in history as part of the Washington, DC civil rights movement.

In the summer of 1960, Howard University students led protests at Glen Echo Amusement Park, a privately operated and segregated entertainment venue on today’s Glen Echo Park site. The Howard University protesters rode the carousel and were arrested for doing so in violation of the amusement park’s segregation policies that barred African Americans. The case went all the way to the United States Supreme Court. Their continued protests—and the active engagement of community members in the fight—led to the amusement park’s desegregation, opening the venue to everyone for its 1961 season and beyond. In 1968, when the amusement park closed, the site became the property of the federal government and is now jointly owned by the entire community and presents arts and cultural programs that inspire and educate. 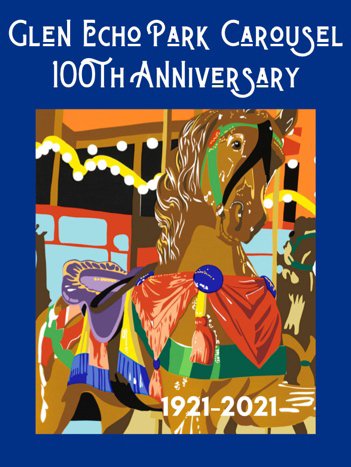 “As an arts park celebrating the 100th anniversary of a carousel, our collaboration with FHN couldn’t be more perfect, because it involves working artists, children, history, and community,” said Katey Boerner, Executive Director of the Glen Echo Park Partnership. “And we received generous funding from the Corcoran Women’s Committee and other donors to make this exciting project possible.” As a temporary artwork, the mural will attract attention throughout the centennial season.

FHN is a nonprofit organization that facilitates collaborative mural projects between youth facing adversity and professional teaching artists. “We are so honored and humbled to support the Glen Echo Partnership in celebrating the centennial anniversary of such an iconic and historic local landmark,” said Jeff Huntington, Executive Director and Co-Founder of Future History Now. “Our goal for every mural project is to engage local youth to learn about the events, people, and places that shaped their communities. FHN knows that the leaders of tomorrow can thrive when they have these opportunities to leave their mark on future history.”

For this project, the Partnership will engage two Montgomery County based nonprofit youth organizations: Community Bridges, which empowers girls from diverse backgrounds to become exceptional students and positive leaders, and Identity, an organization that helps Latino and other historically underserved youth to reach their highest potential.