“I am delighted to welcome Eve to Washington and to the National Gallery of Art team. She inherits an important collection of Italian and Spanish paintings—one that includes our beloved Ginevra de’ Benci by Leonardo da Vinci,” said Kaywin Feldman, director of the National Gallery of Art. “Eve’s experience, scholarship, and creativity will enable us to understand and exhibit that collection in new ways while also fueling visitor curiosity about the extraordinary works we hold in trust for the nation.” 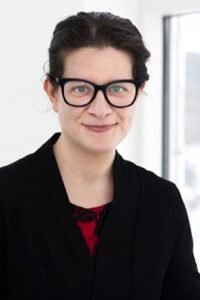 Eve Straussman-Pflanzer
Prior to her current tenure at the DIA, Straussman-Pflanzer served as assistant director of curatorial affairs/senior curator of collections at the Davis Museum, where she oversaw the reinstallation of the permanent collection and curated the first monographic exhibition in the United States devoted to the 17th-century Florentine artist Carlo Dolci. At The Met and the Art Institute of Chicago, she researched and published on European painting and sculpture from the Renaissance to the 18th century. At the Art Institute, she also curated the 2013 exhibition Violence and Virtue: Artemisia Gentileschi’s Judith Slaying Holofernes. Straussman-Pflanzer is an authority on Italian painting in the early modern period and an expert on early modern women artists and patrons. She is presently curating a groundbreaking exhibition on Renaissance and baroque Italian women artists, which will open at the Wadsworth Atheneum Museum of Art in Hartford, Connecticut, in October 2020 and at the DIA in February 2021.

Straussman-Pflanzer is a native of New York City. She holds a BA from Smith College in Northampton, Massachusetts, and a PhD from the Institute of Fine Arts of New York University.

Italian and Spanish Paintings at the National Gallery of Art
The National Gallery of Art’s collection of Italian paintings is considered the most important in the United States and among the finest and most comprehensive in the world. It spans trailblazing 14th-century works by Duccio and Giotto; extraordinary holdings of Florentine Renaissance masters Sandro Botticelli, Fra Angelico, Leonardo da Vinci, and Raphael; and outstanding examples from Venice by Giorgione and Titian. The Baroque period is represented with masterpieces by Lodovico Carracci and Orazio Gentileschi, and the 18th century is captured by dazzling Venetian view paintings. This remarkable collection includes a number of paintings iconic in the history of art—most notably Leonardo’s famed portrait of Ginevra de’ Benci.

Eight painters have been selected as finalists for the Bethesda Painting Awards, a juried competition and exhibition produced by the Bethesda Arts & Entertainment District. Over 200 artists from Maryland, Virginia and Washington, D.C. submitted work to the annual competition created to exclusively honor regional painters. The top prize winners...

Montpelier Arts Center is saying goodbye to Horse, the sculpture, as it rides out to the pastures of its new home at the Show Place Arena and Equestrian Center in Upper Marlboro, Maryland. Join us for this exciting celebration of the departure of our metaled equine beauty, and be on the lookout...

Craig Kraft Studio is excited to announce the first recipient of our series of Small Project grants for District Artist. Redeat Wondemu is an Eritrean-born, Ethiopian-American photographer who captures portraits of women in Ethiopia in a series called “Modern Muses,” dealing with matters of beauty standards, inspiration and representation. Wondemu makes large...

The largest allocation in the agency’s history includes funding for pandemic recovery, arts education, and general operating support for nonprofit arts and cultural organizations The DC Commission on the Arts and Humanities (CAH) is now accepting applications for fiscal year 2023 grant programs. Funding is available to support projects from...

A recent campaign by the Smithsonian American Art Museum’s Renwick Gallery to acquire artworks by leading craft artists has brought more than 200 objects into its permanent collection. The Renwick Gallery 50th Anniversary Acquisition Campaign, begun in 2020, focused on artworks made by a broadly representative and diverse group of...