Like a top model about to debut “next year’s fashions” on the catwalk, Dressed Up and Pinned, the new public art work by noted artist Vivian Beer (2016’s $100,000 prize winner of HGTV’s Ellen’s Design Challenge), is keeping its new  ‘outfit’ under wraps. Poised to make its official debut on October 13, 2016, the recently installed sculpture on the corner of the new Hyatt Place Hotel in Arlington’s Courthouse neighborhood will remain a mystery until its unveiling, currently covered with brightly-colored panels. 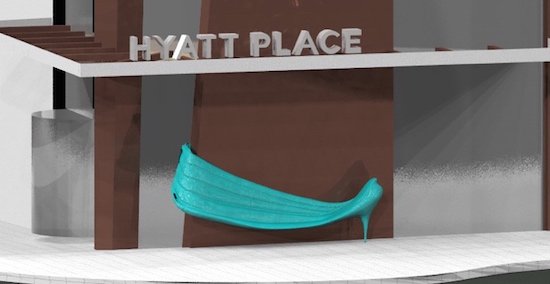 Dressed Up and Pinned is based on the forms of fashion and the materials of automotive design. This functional sculpture, designed as a bench, takes the shape of a surreal stiletto high heel which morphs into drapery wrapping around the façade of the building. Inspired by the history and culture of cars, fashion and the golden age of flight, the sculpture was conceived during the artist’s time as a Smithsonian Artist Research Fellow at the National Air and Space Museum where she researched the design history of aeronautics and aerodynamics. She was especially influenced by streamline design of the 1930s, Art Deco and the modern machine age aesthetic in industrial design.

“By chance, the design schedule of this piece was during my fellowship, and I took an apartment in Arlington for this period of time. This gave me the chance to get to know Arlington and work closely with the Schupp team,” explains Vivian Beer of her work on the project with the hotel’s developers who funded the artwork. “Finding Art Deco to be so well represented and consciously preserved in Arlington only made the choice of using it as a rubric for my visual research more apt.”

“During the county site plan approval process, we intended to make a standard contribution to the public art fund.  Then, at the last step, our Lyon Village neighbors asked us to add ‘something more interesting’ on the Adams Street corner.  We contacted the Public Art Director and decided to obtain county approval and procure our own art.  Although skeptical at first, I must say that the process could not have gone better.   We are so delighted to be work with Vivian Beer to create this unique and functional piece for our hotel guests and the entire community to enjoy,” said Ray Schupp, developer of the Hyatt Place hotel.

“Working with Schupp Companies has been a delight.  They did everything a true art patron should do, beginning with hiring expert art consultant Via Partnership, then trusting their advice to identify the right artist for the job and, finally, allowing the artist to use her creativity to come up with a sensational solution.  This project is a perfect example of how much value directly commissioned public art can add to a private development project,” said Angela A. Adams, Director of Arlington Public Art.

Vivian Beer is a furniture designer/maker based in New England, where her business, Vivian Beer Studio Works, is celebrating its tenth year. “In my studio form follows imagination, and function is a script for where and how we interact with the things we live with.” Her sleek, abstracted metal and concrete furniture combines the aesthetic sensibilities of contemporary design, craft and sculpture to create furniture that alter expectations of and interface with the domestic landscape. With a strong foundation in contemporary furniture design, her recent research into the history of American industry, architecture and transportation—supported in part by a 2014 Research Fellowship at the Smithsonian National Air and Space Museum—adds intellectual rigor and specificity to her work. Her Infrastructure, Streamliner, Anchored Candy and upcoming aeronautic series are physical manifestations of the cultural and industrial history of her materials even as they serve as intellectual bridges for their users, bringing them to a new way of conceiving the built world through a luxurious deployment of the senses.

Her work is included in the collections of the Renwick Gallery of the Smithsonian American Art Museum, The Museum of Fine Arts, Boston, the Brooklyn Museum of Art, The Metals Museum, The Currier Museum of Art and the Museum of Arts and Design, NYC and public art in the cities of Portland, Maine and Cambridge, Massachusetts. She holds an undergraduate degree from Maine College of Art and a Master’s of Fine Arts from Cranbrook Academy. Beer has held numerous residencies including at the Penland School of Crafts, the State University of New York at Purchase and the San Diego State University. She was a 2014 recipient of an Artist Research Fellowship at the Smithsonian National Air and Space Museum.