The diverse works of five visual artists are found throughout a new apartment building located at 100 K Street NE in the NoMa neighborhood. The art at 100K Apartments is visible before you even step inside the building, in a new pocket park lining K Street. Two eye-catching works from artist John Clement — 12-foot-high steel coils in his signature bright red and cheerful orange — anchor either end of the linear park.

John Clement: Curving Sculpture
“I worked to create a really dynamic volume of work with a lot of negative space, so you can see through the pieces to the park, the building and the street,” said John Clement, who lives in Brooklyn and works in Queens. The steel rises off the ground, “nesting, separating, coming back apart again,” helping to frame the lush green spaces on First and K streets, NE. Created with 4-inch and 6-inch steel coils, the pieces look as if they are floating, suspended in mid-air with a sense of weightlessness — even though they weigh more than 6,000 pounds apiece.

“I like the works to have a sense of weightlessness to them, where they look like they rolled there and are perilously resting until they decide to roll away,” Clement said. He began working with steel 25 years ago and appreciates its forgiving nature. He enjoys creating pieces large enough to be transported by a crane, yet small enough to resonate with human knowledge of the physical realm. “Sculpture can really have a visceral effect on people that they don’t understand because it’s occupying the three-dimensional world and it commands your attention because you’re physically there,” he said.

Kelly Towles: Abstract & Colorful
Step inside the building, and a resident can instantly see through glass-walled amenity spaces to an intimate interior courtyard. A brightly colored back wall features an abstract work by DC artist Kelly Towles, whose larger-than-life murals are in dozens of locations throughout the city, from NoMa to breweries to alleyways and more.

“Most people gravitate to my main body of work and don’t realize I like doing things that are more abstract,” said Towles, executive director of the popular POW! WOW! DC mural festival and founder of the creative agency Holy Bones Studio. “My abstract paintings are usually the background for another piece. It’s nice to have someone come around and say, ‘The abstract work would be amazing on its own.’”

The 100K courtyard art incorporates blues leaning toward a luxurious, deep indigo, and hues of orange and yellow. “We had to build this piece in layers,” said Towles. “The final layer is on the top edges closest to the viewer.”

Timothy Curtis: Playfully Silhouetted
Step from the courtyard into the event room, where residents can enjoy shuffle board and relax. Four pieces of an editioned set of eight lithographs overlook the shuffle board table (the other four pieces will be placed elsewhere in the building). Curtis’ curving lines and silhouettes playfully portray abstract entanglements and connections. Self-taught artist Timothy Curtis began creating his signature graffiti-style artwork in the streets of Philadelphia at the age of 9. This debut lithograph was printed at Poligrafa Obra Grafica in Barcelona, Spain, in their first collaboration.

Katie Pumphrey: Furiously Tense, then Calm
Katie Pumphrey, a Baltimore artist who is also a long-distance open-water swimmer, created a six-foot-by-eight-foot piece now behind the concierge desk, visible from K Street. Her abstract pieces “explore the tension between chaos and calm,” she said. “All of my work tends to have those two elements working together and battling each other.” This particular piece has a dark “v” shape that forms a negative, “restful” space, pushing against the brightly colored, furious and chaotic brush strokes around it. 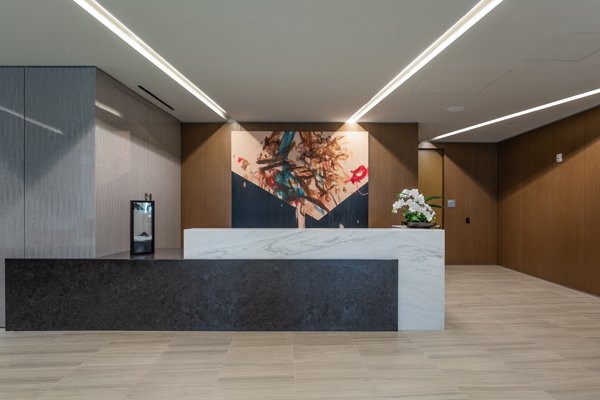 “A lot of my work is very abstract, but I pull from imagery sometimes — bulls, packs of hunting dogs, waves, swimmers — things that express power and weight.” Her work as an open-water swimmer heavily influences her paintings as well; Pumphrey swam the English Channel in 2015 and crossed the Catalina Channel to Los Angeles this summer. 100K will also feature six of her other pieces, “Up Down and Under,” which explore the feeling of vertigo she experiences when swimming long stretches in the dark. “The largest portion of the first part of my swim across the Channel was in the dark,” she said. “Everything becomes very confusing.”

James Kerns: Practical Sculpture
While the public spaces of the building and the park are highlighting these varied works of art, 59 apartments will also feature a different kind of sculpture. James Kerns, a DC-based furniture maker and mixed-media sculptor from the studio Corehaus DC, has created custom kitchen islands to highlight the white cabinets and sleek countertops. He utilizes found materials of wood and metal to create unique statement pieces.

The 100K building sits in the center of NoMa, which has had more than 50 murals created throughout the neighborhood in the last four years as part of the POW! WOW! DC mural festival. This new building filled with art is the perfect addition.

Photos courtesy of Equity Residential and the author

This news brief is an update of Kate Fleming and Tom Woodruff's 50 States Project.  You can read about the first leg of their journey HERE.   From Kate and Tom: Dear Friends and Supporters, Hello from Montana, our 40th state! We’re here with only ten states left because of YOU...

The National Postal Museum reopened its doors Friday, August 27. Hours: Friday through Tuesday, 10:00 a.m. – 5:30 p.m. (Closed Wednesdays & Thursdays until further notice.) Timed-entry passes are not required to visit the museum. US Postal Museum has worked to create a safe environment for visitors and staff. We...

On behalf of the Town of Riverdale Park, the Hyattsville Community Development Corporation (CDC) has announced the arrival of five new sculptures across Riverdale Park. The Riverdale Park Public Art Initiative executes the Town’s plan to create an engaging, publicly accessible outdoor sculpture art gallery within its many flourishing neighborhoods. Riverdale...