The Nicholson Project has announced its 2021 Artists-in-Residence, A.J. McClenon and Stan Squirewell. McClenon began her residency on February 1, 2021 from her Chicago-based studio and will be living and working onsite at The Nicholson Project from March 1 – April 30, 2021. Squirewell will live and work onsite from May 15 – August 15, 2021. Both artists were born and raised in Washington DC. 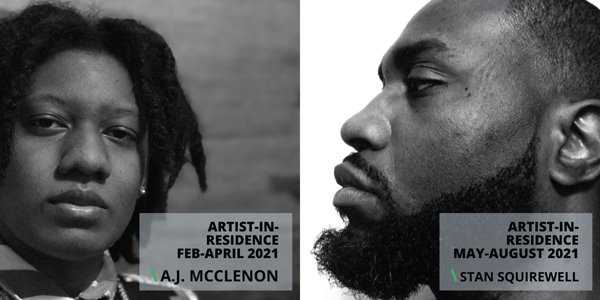 Born and raised in Washington, DC,  A.J. McClenon studied art and creative writing at the University of Maryland and The New School prior to receiving a Master of Fine Arts from the School of the Art Institute of Chicago in 2014. Alongside artistic experiences, McClenon is passionate about teaching and community collaborations with the goal that all the memories and histories that are said to have “too many Black people,” are told and retold again. As a means to uphold these stories McClenon creates performances, installations, objects, sounds, visuals, and writings. These creations often revolve around an interest in water and aquatic life, escapism, Blackness, science, grief, US history, and the global future. McClenon is deeply invested in leveling the hierarchies of truth and using personal narrative to speak on political and cultural amnesia and their absurdities.

During her residency at The Nicholson Project, McClenon will be engaging the neighborhood and wider city communities through her ongoing sci-fi multimedia project called VEGA. She will be installing pop-up “black hole” installations throughout DC and in The Nicholson Project’s garden where she will ask viewers about their thoughts on parallel universes. Through these activations and research, McClennon will gather future predictions from neighbors and prison abolitionists, asking them if they think that prisons will exist 100 years from now, and do they think that prisons would exist differently or at all on this alternate earth if chattel slavery in the Americas never existed. McClennon will be bringing these elements to life through film, sound and other visual works, including an exhibition of her collage works in Nicholson’s gallery.

Stan Squirewell (b. 1978) is a painter, photographer, installation, and performance artist. Born and raised in Washington, DC in the Barry Farm neighborhood, just a few blocks away from The Nicholson Project, Squirewell established a serious art practice while working from his Harlem-based studio before moving to Louisville, KY where he currently lives and works. His work examines who curates and controls the narratives that become accepted as history; from what perspective is history written, whose stories are told, and whose are neglected?

Squirewell’s own family history provided an impetus for this line of inquiry after, in his 20s, he learned that his ancestry was not what he had been told, but included indigenous roots. Looking back at census and enlistment records, it became apparent how racial, cultural, and ancestral roots become blurred or even erased, sometimes by accident and sometimes on purpose. This inspired Squirewell to ask from whose perspective history is written. It also inspired him to begin questioning the education system, as he realized that whoever controls the educational narrative controls the cultural consciousness. Says Squirewell, “Marginalized communities are often overlooked and omitted from history in general. The history I was taught did not have my ancestry represented. As a child of the hip hop era, born in the 70s, growing up in the 80s and 90s, I look at my work as almost remixing, crate digging, but my crates are museums, private collections and historical narratives. I remix my pieces according to my own way of writing history. The main thing I want the viewer to take away is to question what you think you know, what you’ve been told and what you believe.”

Squirewell’s artistic training began at the Duke Ellington School of the Arts. Since graduating he has continued his tutelage under many of DC’s legends including artists Michael Platt and Lou Stovall. He holds an MFA from Maryland Institute College of Art’s Hoffberger School of Painting (2007) where he studied under the late Grace Hartigan, and is the first winner of the Rush Philanthropic and Bombay Sapphire Artisan series. He has performed with Nick Cave (SoundSuits) at the National Portrait Gallery, and Jefferson Pinder with G-Fine Arts. His work is held in private and public collections including the Reginald F. Lewis Museum in Baltimore, MD, the Robert Steele Collection, and the Smithsonian’s National Museum of African American History and Culture, among others.

During his residency at The Nicholson Project, Squirewell will use his time to research the archives at the National Gallery of Art and the Library of Congress, and to develop new work in preparation for his first upcoming solo museum exhibition. He will also host a program for young aspiring artists that live in Southeast DC, sharing his own journey and experiences to becoming a full-time practicing artist.

About The Nicholson Project