The Gay Men’s Chorus of Washington, DC (GMCW) has chosen nine artworks as part of the company’s international call for Portraits, a new oratorio consisting of nine movements from composers that were inspired by the winning artworks.  Portraits will premiere in June 2024 and include dance performed by 17th Street Dance.

Nearly 250 artists from around the world submitted art works which will be coupled with music. GMCW now invites composers to submit original music to accompany the pieces of art. For further information about the artists and the project please visit the exhibition page.

NIGHT HUNGER
Joan Cox (Baltimore, MD)
“This is a self-portrait of me and my wife in our home in an intimate moment. This painting shows the love and intensity of a lesbian relationship. We are not two women to be gazed at by male viewers, but rather to be identified with by LGBTQ viewers.”

SHARD
Céline Gauchey (New York, NY)
“There are two versions of ourselves: who we present externally and who we truly are. More often than not, these two selves do not entirely align. As a biracial first generation American, I often question my own cultural identity, contemplating the inconsistency between how I see myself versus the reality of how I am seen.”

SLEEP WITH ONE EYE OPEN AND DO NOT SPEAK OF IT
Terrance Gregoraschuk (Calgary, Alberta, Canada)
“I am a male born into a female body. I wrap my breasts to hide my female form. I live in a hostile environment where nobody understands, and I fear for my life.”

VIRGINIA
Jacqueline Hoysted (Bethesda, MD)
“This portrait relates to how segments of the population are marginalized and mistreated. It is created with the idea of taking back the ‘gaze.’ The subject in the portraits looks out defiantly and challenges the viewer.”

MAN WITH TATTOO, HAVANA
James Kimak (Orangeburg, NY)
“This is a cultural study of a strongly sunlit man displaying both his religious and political faiths, in some ways at odds with each other, based on a photo I took on a street in Havana, Cuba.”

SEE ME
Linda Lowery (Alexandria, VA)
“I think this piece is a strong example of my portrait painting. The young man looks strong, physically present, yet vulnerable. He is not afraid to show us his strengths and weaknesses. He is fully human. Just like me. Just like you.”

STEELED
Judith Peck (Great Falls, VA)
“My painting ‘Steeled’ is about the isolation you feel while being cast as the other. My model and I had a conversation about some specific incidents in our lives that made us feel that when it happened again, next time we would be more prepared, steel ourselves to the situation.

STRANGE FRUIT
Nicole Wandera (Fairfax, VA)
“This piece is inspired by mental health in the black community, and how black men rarely have a safe space to be vulnerable and express themselves. The name of the piece is inspired by Nina Simone’s version of ‘Strange Fruit.’”

KEEP YOUR EYE ON THE PRIZE
Gregory Wilkins (Mankato, MN)
“Black and queer lives matter. As the United States continues to struggle where underrepresented communities fit within a queerphobic and a racist country, we must never forget our history as we continue to push forward. Collectively, our struggles empower us to create a better tomorrow that is filled with equality, equity, and inclusion. These images are a testament to the past and present as we find voice and bring sweeping systemic changes to an ever-changing world.”

Information on the PORTRAITS project:

PORTRAITS will represent the spectrum of sexual, gender, racial, ethnic, and cultural identities in a nine-movement oratorio performed by GMCW and 17th Street Dance. Each movement will feature one of the nine artworks from the PORTRAITS exhibit, brought to life aurally by the music, and visually through dance. The music and text of the piece will tell an aspect of the human experience, inspired by the artwork of the composer’s choosing from the PORTRAITS exhibit, with the lyrics supporting the original intent behind the artwork.

Pieces for consideration should be 3-6 minutes in length, scored for TTBB chorus, with optional vocal solo(s). The work may be a cappella or with piano accompaniment. Other instruments may be included as optional solo or chamber ensemble. Composers may submit works from their existing repertoire, or a sample or sketch of a proposed work to be developed should the composer be selected.

ABOUT GMCW
The Gay Men’s Chorus of Washington, DC (GMCW) is an internationally recognized organization that inspires equality, justice, and inclusion through the performing arts. Our organization is comprised of a 300-member flagship chorus, the GenOUT Youth Chorus for LGBTQ+ and allied young people ages 13-18, the chamber ensemble Rock Creek Singers, the a cappella group Potomac Fever, the gospel/inspirational ensemble Seasons of Love, and the dance troupe 17th Street Dance.

Since 1981, GMCW has presented compelling, sophisticated, entertaining, and enlightening concerts to hundreds of thousands of people in the nation’s capital, around the United States, and at international venues. Our season is anchored by three major shows presented at the historic Lincoln Theatre in Washington, DC. Concert seasons may also include a cabaret, a classical music concert, or a Broadway musical. In addition, the main chorus and our small ensembles participate in over 125 outreach performances each season.

GMCW is the voice of LGBTQ+ people in Washington, DC, having performed at events for President Biden, the Kennedy Center Honors (for which GMCW has performed twice); inaugural festivities for Presidents Clinton and Obama, historically significant ceremonies including the memorial service for Frank Kameny, the interment service Matthew Shepard, and the celebration of the Supreme Court’s marriage equality decision in United States v. Windsor. In addition to these high-profile events, GMCW and its small ensembles can be found performing weekly around the DC metro region at faith communities, businesses, and schools, promoting justice and equality for all through song.

The Department of Public Works (DPW) and the DC Commission on the Arts and Humanities (CAH) announce they are closing out the 15-year anniversary of the MuralsDC program with 15 unique art installations across four wards, to include an alley gallery (a.k.a., “Art Allery”) in the Atlas neighborhood of Ward...

Artist’s work will address gender-based inequity with her signature feminist messaging, on view October 28, 2022–February 26, 2023 The National Museum of Women in the Arts (NMWA) has commissioned Austrian artist Katharina Cibulka (b. 1975) to present the next iteration of Lookout, a public art project presented while the museum...

A one-of-a-kind creation by renowned glass artist Micah Evans is now on display at the Smithsonian American Art Museum. Raphine is a 1:1 replica of a 19th-century Willcox & Gibbs sewing machine, made of thousands of thin strands of glass. Designed and made by Micah Evans—who serves as the director of...

HEMPHILL has announce the it will represent artist Tim Doud. The gallery will present a selection of the artist's paintings in an exhibition titled Prolepsis, opening November 12, 2022. Click here for more information on Tim Doud. GALLERY HOURS Tuesday - Saturday from 12:00 - 5:00pm and by appointment. To schedule... 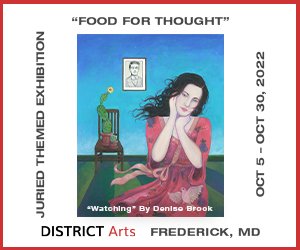