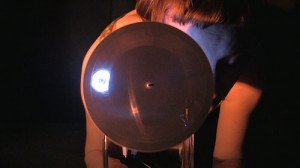 The public is invited to a discussion of the videos of Julia Oldham, Wednesday September 22 at 7PM.  Artist Julia Oldham, Physicist Paul So and Curator Jose Ruiz will be in attendance. G Fine Art is located at 1350 Florida Ave., NE, Washington, DC 20002.
.
In Julia Oldham’s three videos, “Determining the Speed of Light”, “Weighing the Earth” and “Entanglement”, she uses her body as a tool to examine fundamental constants of the universe. This discussion will explore the physical theories as well as consider the impluse, the process and the antecedents for the artwork.
.

The complete essay by José Ruiz: In the Case of Science and Arts – Strange Readings is published below:

In the Case of Science and Art: Julia Oldham – Strange Readings

Most of us assume the practice of science to be an academic space heavily tilted on research, complex formulas, and incomprehensible data. We think of blackboards, glasses, microscopes, and mounds of books and papers. As much as being a scientist requires extreme brainpower and vision, it also requires a certain type of personality—someone with a lifetime of unwavering patience and perseverance. Someone who can only make progress, or work, through the process of experimentation, failure, and re-experimentation.

Now, if I were to place the words art/artist instead of science/scientist in the above paragraph, and switch a few supporting nouns, you would visualize the practice of a contemporary artist. The obvious parallels are there. Both revel in discovery and independent thought. In times of self-reflection, they’re probably mutually dismayed at how the history, findings, and impact of their practices are largely ignored by society. But even amidst these comparisons, it would be too easy to start the discussion of this show with just a binary function between science and art.

For Julia Oldham, her interest in science – particularly physics – is heavily embodied in her upbringing and personal relationships, as both her father and partner are physicists. Like most artists whose past experiences and biographical ephemera often subconsciously shape their projects, as if in acts of osmosis, Oldham’s focus in physics is grounded in the subject’s familiarity and mystery (given the nature of the subject itself). This is then addressed through her ongoing, formal and conceptual explorations of video, performance, and sound art with a built-in post-feminist re-gaze. In each of her videos, she is center-present as she slides between witness, test subject or performer while straddling narrative and experimental filmic (or moving image) structures.

Oldham’s newest body of work Fundamental Constants (2010-present), presented here through three single-channel videos and recorded in and around her studio in Red Hook, Brooklyn, focuses on recreating historical physics experiments and theories with common materials and a DIY sensibility. The original experiments/theories were conceived to measure the fundamental constants of the universe as well as to test various quantum theories. What this research yielded, some of it dating back to the end of the 18th Century, was the principal groundwork for the language of physics that future physicists would expand upon until today. In each of the artist’s adaptations, the experiment’s tools, the act of determining data, and the end results fluidly embellish a sense of play that unbalances the standards of these scientific citations¬¬.

In Determining the Speed of Light, Oldham, in collaboration with experimental physicist Dr. Eric Corwin, Ph.D., created a version of a Fizeau Apparatus (1850) to measure the speed of light. The artist, who is seen as both the operator and the observer, follows a beam of light between two fixed reflectors intercepted by a rotating disc with two perforations, which accelerates until the point where light cannot make it back to the eye through the perforations. When the disc is spinning fast enough for the eye to disappear, the disc’s speed can be inputted into a dense formula in order to render the speed of light. In Weighing the Earth, Oldham and Corwin teamed up again to tackle the Cavendish Experiment (1797), the first experiment to accurately yield the mass of the earth by using a torsion balance—a scale of sorts suspending a pair of large lead balls on either side of a balanced rod leveraged to two smaller balls with wires and pulleys. The apparatus discovered a gravitational force of attraction between the different sized balls on either side of the scale. This shift was measured by the angle of the rod and the twisting force (torque) of each wire and then re-measured in context to Newton’s law of gravitation, in order to determine the density of the earth. In Oldham’s version, the artist offers her body as the torsion device and morphs from observer to instrument while balancing domestic castoffs such as apples, strainers, and Lazy Susans to complete the durational act.

Entanglement, moves from the realm of universal constants to quantum mechanics by dismantling the quantum entanglement theory. Quantum entanglement could be crudely described as a property existing in an abstract and mathematically derived system of interacting waves and particles of energy and matter. It comes into being when two or more objects that define the system, such as a set of waves or particles, are intertwined to the point where they cannot be isolated without directly referencing their union, regardless of distance. The idea is as hard to visualize as it is to write but in collaboration with French theoretical physicist Dr. Maxime Clusel, Ph.D., Oldham and Corwin overlay quantum entanglement above the template of a love story. One where a character named J, performed by Oldham, writes love/rejection letters on “entangled” sheets of paper with her quantum pen. Her letters bounce around in an unsettled state, shrugging off love or rejection, until they reach Erwin and Max, two characters vaguely referencing Corwin and Clusel as well as deceased physicists Erwin Schrödinger and Max Planck. The moment of delivery resolves the letters’ final state and challenges the quantum love triangle with a future of passion or heartbreak.

The formal tendencies in Oldham’s videos accent the styling of American Film Noir and French New Wave cinema by forging low-key lighting, wavering compositions, and suspense with jump cuts, set improvisation, and existential themes. This is used to some degree to confront the archetypes of the female protagonist/antagonist as victim, femme fatale or romantic through the deadpan basis of science itself. On a conceptual level, her work shares an affinity with performance and interventionist projects known for reinterpreting historical data with artistic nuance. Adrian Piper’s Funk Lessons (1982-84), in which she taught participants the history and moves of funk while creating multicultural dance parties, supports Oldham’s focus on distorting reproduction through forms of collaboration. In The Green Line (sometimes doing something poetic can become political and sometimes doing something political can become poetic) (2005), Francis Alÿs attempted to retrace the armistice line that divided Israel and its neighboring Palestinian territories before the Six Day War of 1967 with a single line of dripping green paint. Politicized complexity is turned into an absurd gesture that is not too distant from weighing the earth’s mass via a human body.

Seemingly wry acts of distortion and absurdity, in Oldham’s case, point to a central question. Is there a reason to make science more artistic or art more scientific? The answer appears to linger beneath a translation process that codes situations and narratives rather than musing on additional connections between science and art. Aimed at the midpoint between human existence and its relationships, Oldham and cohorts trade in scientific accuracy and true-to-form replication for experiential, visual, and metaphorical readings. Readings whose inherent differences are in part more realistic for their strangeness than for their actual measurements.

An opening is scheduled for Saturday, October 1 at 7pm | Artist talk with Kanchan Balsé – Sunday Oct.30 at 1pm

An artist talk is scheduled for Saturday, October 1 at 11am.

An artist talk is scheduled for Sunday, October 2 at 2pm.

The artist talk is scheduled for Wednesday, September 28 at 1pm.

A virtual artist talk is scheduled for Thursday, September 29 at 12pm.

The workshop is scheduled for Saturday, October 1 at 12:30pm.