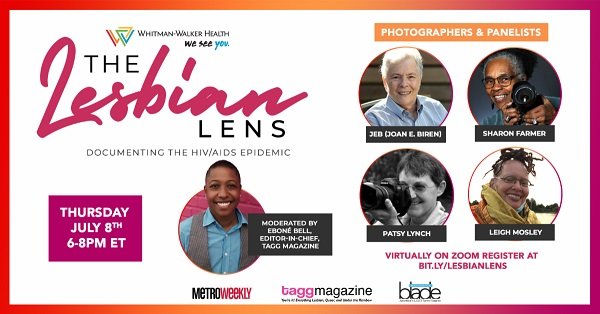 Moderated by Eboné Bell of Tagg Magazine, this will be a lively discussion about what photographers were seeing and experiencing during the early years of the epidemic. This year marks the 40th anniversary since the first CDC report identified what would become known as HIV/AIDS. Join Whitman-Walker Health as they pay tribute to the women who helped to document, and give voice to, the fight against HIV/AIDS in our community.

Photographers & Panelists:
Moderated by:
By Editorial Team on May 16, 2022

The artist talks are scheduled for Saturday, May 21 at 1pm.

An opening reception is scheduled for Saturday, May 14 from 5pm to 7pm. NEW TIME & DATE—Reception and Artist Talk: Saturday, July 23 from 2-5pm

An artist talk is scheduled for Friday, May 13 at 12pm.

May 2022 Exhibitions at Touchstone Gallery