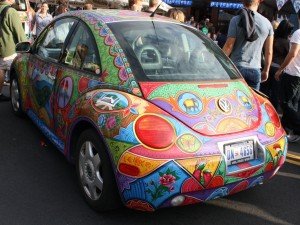 Quick, name one of the hallmark sights at the H Street Festival.  If you said the parade of art cars, you’re not alone.  Parked along the eastern end of H Street, the art cars have quickly become a signature part of the H Street Fest.  Their presence at the fair is the due to the hard work of Gallery O/H owners Steve Hessler and Mary Ellen Vehlow, and I recently sat down with the dynamic duo to talk about their plans for this year’s festival.

White collar professionals by day and passionate folk-art collectors by night, the couple both sit on the H Street Festival planning committee under the auspices of the H Street Main Street, the program’s official festival organizer.  While their position gives them a voice in the overall direction of the festival, the art cars are truly their baby.  The art cars debuted five years ago with just two cars, and participation has grown every year.  This year’s cavalcade features 9 cars, traveling from as far away as Kansas (prior years have seen cars all the way from California).  Hessler and Vehlow generously underwrite the associated costs (transportation stipend, hotel rooms, etc.) of bringing the cars cross country.

With names like Laster Blaster, The Big Banana and Vanadu, you know the cars have a story to tell.  I asked Hessler where he and his wife find these crazy contraptions.  The couple has been collecting folk art for over twenty years.  At this point they are embedded in the folk art community and have gotten to know a wide swath of people.  “If you collect tiddlywinks,” Hessler notes, “over time you begin to learn who has biggest tiddlywinks collection and where they are located.”  A unique example to say the least, but oddly enough it makes perfect sense. He goes on to give me a concrete example. There are festivals around the country where art car enthusiasts gather.   The couple met Charles Laster (namesake of the Laster Blaster)at one such event in Baltimore in July and extended him an invitation to this year’s festival here in D.C. 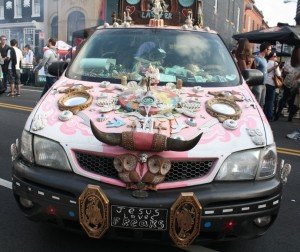 Asking them what type of person has the wherewithal to adorn their vehicles got the two excitedly talking. “These are people who have a story to tell and are looking for a venue,” explains Hessler, continuing, “It has nothing to do with money… [but]with the love of art, adventure and personal expression.”  It turns out that the reasons are as varied as the owners themselves.  The brothers behind Big Banana intend their piece to be a fundraising tool to increase awareness of deep vein thrombosis, a medical condition that took the life of their mother.  For the Lasters, it’s a tribute to Elvis and the rockabilly genre.  The “art ambulance” is a converted EMS truck owned by an electronic techie who prefers to live on the fridges of society.

But is it art?  That’s the loaded question I lobbed at them.  Vehlow hits back, telling me there is no simple answer.  She explains:  “Art is what you determine it to be. It is similar [to other varieties of folk art] because it is of the people and comes from an untrained perspective. If they make it with their own hands not following in an academic tradition, it [therefore] springs out of a populist, folk tradition.”  This notion of a “non-academic” background is a key component in defining a work as folk art.  Hessler takes up where is wife leaves off, calling the cars, “an extension of the ‘yard art’ [style]”.  He feels these works are a natural extension of, and complimentary to, the work featured in their gallery.  Their goal with the gallery, and by extension the art car exhibition, is to make people feel comfortable with the notion of folk art and show how art straight from the heart can be just as powerful as art created in an academic environment.   The artists themselves are quite engaging, and more than happy to chat with visitors about their vehicles.

Hessler was excited to tell me about something new happening this year.  He and Vehlow have donated a 1972 Chevy Cheyenne truck to be embellished the day of the event.  Local artist Jay Coleman has been given free rein (well, with a few kid-friendly caveats) to graffiti the car and create his own version of an art car.  This will be an all-afternoon event, so fair-goers can stop by more than once and watch his progress. 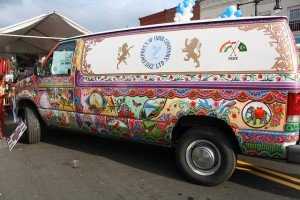 And that’s not all they’re doing.  The gallery itself is given over to the Art in the Alley Project, organized by Elise Bernard of Frozen Tropics fame.  “Celebrating local art in local spaces,” Art in the Alley features artists from the nearby Trinidad neighborhood in their own DIY gallery setting.  Impala Cantina takes over the courtyard (yes, they’re still waiting for the red tape to be cleared for their grand opening next door – hello Tommy Wells!).  Gallery O/H is the official sponsor of the 14th Street music stage and Vehlow herself is both sponsoring a number of artist’s tents and organizing a “crafter’s” tent in the thirteen hundred block.  It sounds like it’s shaping up to be a very busy day for this power couple!

This year’s H Street Festival is on Saturday, September 15 from 12-7pm.  For more information visit their website here.  And while you’re at the fair, be sure to look for the East City Art booth and say hello!