The Artspace lofts is a collaboration between Dance Place and the Minneapolis-based Artspace and will provide affordable live/work space for approximately 41 artists.  When we last visited the building in March construction was underway  and eligible artists were being invited to apply for housing.   According to Mr. Payne, the building is slated to obtain its certificate of occupancy from the city on June 22nd, with the first 11 residents moving in at the end of June.

We started on the first floor of the building, where workmen were busy putting last-minute, cosmetic touches on the interior lobby.  The first floor is dominated by a large, glass-walled studio space that will

be used primarily by DancePlace, whose offices and principle theater space are next door.  The studio space is also available for residents’ use when not being utilized by Dance Place.   The residents’ lobby and Dance Space studio is separated by a glass wall which can be fully opened, allowing for the both first floor public areas to be turned a giant arts lab or exhibition space.  Mr. Payne noted that, unlike most apartment and condominium buildings, Artspace residents will be able to paint and decorate the lobby (and public hallways) of their building to further their artistic pursuits.  Dance Space is also slated to renovate its own building, and when complete, will connect via a walkway to the new studio.

We next visited several finished apartments on the building’s third and fourth floors.  Units range in size from studio to 2 bedroom, and feature the open floor plan, high ceilings and exposed duct work that one often visualizes in an artist’s loft space.  I was impressed with finishes in each unit, whose quality rivals

that of new, “high-end” buildings sprouting up downtown.  Units on the south and west of the building receive an exceptional amount of light, and will surely be in demand by visual artists.  While painters will covet the light, musicians (and their neighbors) will appreciate the “floating walls” between units which act to dampen sound.  Parking is available on a first-come, first-served basis in the underground garage, though with the Metro, bus and bikeshare stops just steps away, Payne anticipates most residents will utilize public transportation.

The first block of units available for June move-in are already reserved, but units will be available for late summer occupancy.  Residency in the building is reserved for artists meeting specific income guidelines, and while approximately 80 applicants have been submitted, not all were

ruled eligible for housing.  There is still time for area artists, musicians and thespians who may have missed the initial call for applications to step forward.

The diversity of building residents will be unique in the area, and I was interested in how the Artspace planned to leverage that diversity in its interactions with the community.  Payne indicated that once fully occupied the building will have its own, member-run board that would be responsible for organizing community outreach and events.  He anticipates a formal, grand opening event in November with more community-oriented events commencing in the spring.  East City Art will be sure to publicize them well in advance. 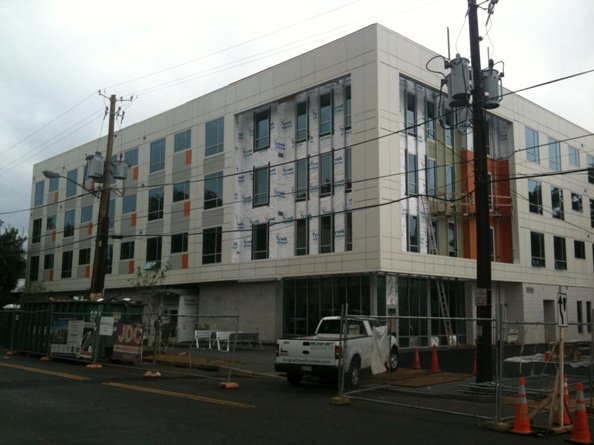