The continuing trans- formation of the Capital Riverfront Neighbor- hood in Southeast DC gets an impressive lift this weekend with the official opening of Canal Park.  Located at 2nd and M Streets, SE, the park runs north for three city blocks, offering a variety of outdoor environments for neighborhood residents and area workers as well.   Park Tavern, a full-service restaurant is also scheduled to open November 16, 2012.  While the Yards Park, located a few blocks south, may have enviable river views, Canal Park has its own, unique draw- a full-fledged ice skating rink!  I caught up with Chris VanArsdale, Executive Director of the Canal Park Development Corporation (which oversees park operations), to get an overview of the new park.

The name Canal Park is apt.  According to VanArsdale, nearly two hundred years ago this land was part of a canal system that crisscrossed the District.  With the advent of railroads, the canal fell into disuse, becoming for a time an open sewer before finally being paved over in the early 1900’s; its most recent use was as a bus storage lot (the CPDC has a full historical timeline here ).  That history informs the look and feel of the park.  Surrounded by buildings, the park’s vibe could be coined “urban retreat”, offering 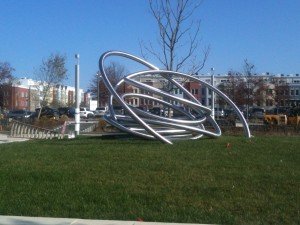 nearby office workers a respite during the workday and local residents a quiet escape right outside their doorsteps.  Water features such as a programmable splash fountain and a large-scale water feature in the park’s central block reference the land’s prior usage.  Even the shape of the ice rink – linear with inset plantings to navigate – gives the impression of skating on a canal rather than a standard, round ice rink.

Art also plays a fundamental role in the park’s design.  Local artist David Hess was commissioned by the DC Commission on the Arts and Humanities to create a site-specific installation which winds its way through the parks three blocks.  Titled Waterline, the large-scale, stainless steel piece undulates across the landscape, sometimes appearing as if burrowing underground only to resurface in another part of the park; VanArsdale describes it as a giant, pressurized garden hose twisting across the landscape.  In a nod to more cutting edge art, a twenty foot cube comprised of translucent polycarbonate panels sits atop the roof of the main pavilion.  This cube will be used as a backdrop for projection video as well as light displays. The CPDC will be working with the DC Commission on the Arts and Humanities to program the cube with original video art.  When not used for art, the cube can display real-time video streaming –

perhaps skaters will see themselves on a twenty foot screen! Finally, a large green space in the park’s northernmost block doubles as a flexible event space which the CPDC (in conjunction with the Capital Riverfront BID) will program with events ranging from art displays and movies to outdoor markets, with the emphasis on making this a year-round destination.

The park is designed by the landscape architecture firm OLIN and features sustainable landscape initiatives, including what is being billed as the District’s largest rain garden, designed to capture and re-use storm water runoff from the park and neighboring streets.  Park developers have applied for certification from the Sustainable Sites Initiative (a certification program similar to LEED designation for buildings).  This fact is something that will no doubt be touted by speakers at the opening ceremonies.

Those ceremonies commence Friday, November 16th at 10:30am with a half-hour concert, followed by remarks from a veritable whose-who of local politics.  Confirmed speakers include US Representative Eleanor Holmes Norton, Mayor Vincent Gray and Ward 6 Councilmember Tommy Wells.  The ice rink opens at noon with “ice performances” throughout the day and the light cube will be launched at dusk.  If you can’t attend Friday’s festivities, then swing by Saturday for another day of music, art and ice skating.  A complete list of weekend events is available on Canal Park’s website here.