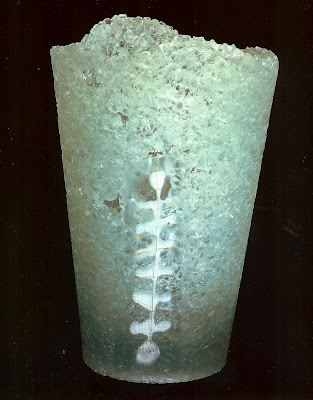 Frances Stewart Higgins fused crushed glass and enamel vessel, 1958-1959.
.
.
2012 marks the 50th Anniversary of the American Studio Glass Movement, and its celebration will be marked with many events and exhibitions. The focus of the anniversary celebrations will mainly be on hot-glass and taking glass making from the factory to the artist’s studio, using the 1962 Toledo glass workshop as the birth date.
.

As the Washington Glass School features kiln-formed glass, we wanted to join the celebration by outlining the parallel and often co-dependent history of the kiln-formed glass section of the movement (aka warm glass, or fused glass). This series of postings – often based directly on writings by glass artists Richard LaLonde, Boyce Lundstrom, Dan Schwoerer, Bert Weiss and Corning Museum of Glass’ history information online. It also strongly references Martha Drexler Lynn’s seminal study “American Studio Glass 1960-1990“. Thanks also to Chip Montague and Betty Py for sourcing images and backgrounds on the featured artists.

Shifts in art practice after WW2 opened the door for materials not previously considered.The popular story about the origins of the American studio glass movement casts Harvey Littleton as its Prometheus. Littleton and his teaching had a significant effect on the evolution of studio glass. His work, and that of his students and their followers built a basis for the current glass art scene. While

Littleton’s passion for hot glass originally led him to define “studio glass” to that blown or worked in a hot-glass studio – his later works included kilnformed plate glass and printing on glass plates, a new concept that he called vitreography. While the precise origins of glass fusing techniques are not known with certainty, there is archeological evidence that the Egyptians were familiar with basic techniques. Some historians argue that the earliest fusing techniques were first developed by the Romans, who were much more prolific glassworkers.  Fusing was the primary method of making small glass objects for approximately 2,000 years, until the development of the glass blowpipe largely replaced fusing due to its greater efficiency and utility. 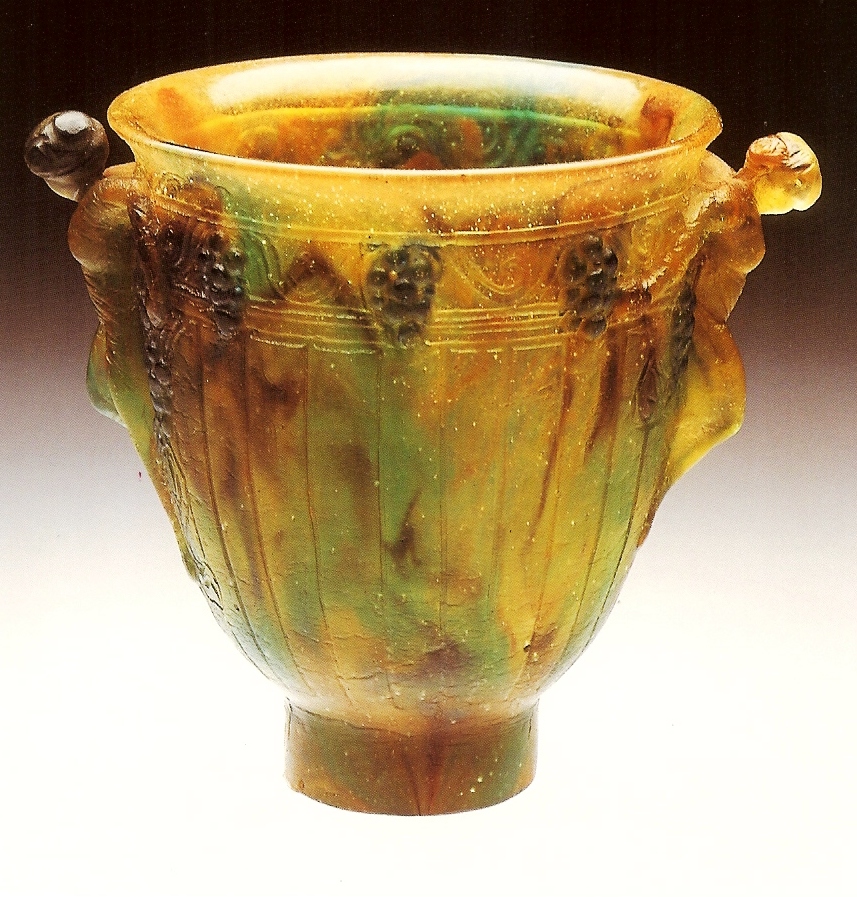 Vase, 1923.François Emile Décorchemont. pâte de verre
.
.
Two government actions helped to propel crafts to greater acceptance in the 1930s and 1940s, the Works Projects Administration Federal Arts Project (later WPA) created employment for the approximately five thousand artists and craftsmen. Another consequence of the war that contributed to the emergence of studio glass was that as returning veterans’ formed new families, they required housing and furnishings. This fostered a trend toward mass-produced anonymous objects. Handcrafted items, in contrast, were refreshing and capable of expressing individuality. Crafts were seen as an antidote to the suburban Levittown and as a means to creating a sense of individuality in the new American suburban tract house.
. 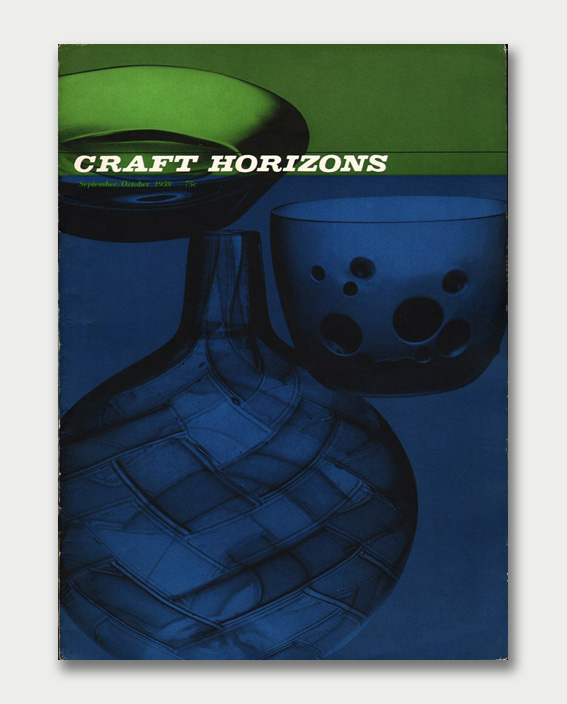 Sept/Oct 1959 issue of Craft Horizons Magazine. The cover shows images from the 1959 Corning International Contemporary Glass Exhibition. The magazine changed its name in 1979 to American Craft.
.
.
In the late 1940’s and 50’s glass pioneers set up studios to experiment, and made functional household objects like plates, bowls, jewelry and the occasional art object or hanging mobile. Their success often came from the transfer of ceramic and other craft techniques to glass. These artists fused enamels that were created for metal enameling on and in between pieces of window glass in electric brick kilns used for ceramics.
.
.

-an outline of a few of the pioneers:
.
Maurice Heaton, a designer of stained glass, became adept at slumping flat sheets of hot glass into or over a mold to form vessel shapes. Born in London, he was the son of an Arts and Crafts cloisonné enameller and the grandson of a stained-glass maker. He moved to New York in 1914. His work is characterized by detailed, linear patterns created by fusing crushed, brightly colored enamels onto the surface of the glass.
. 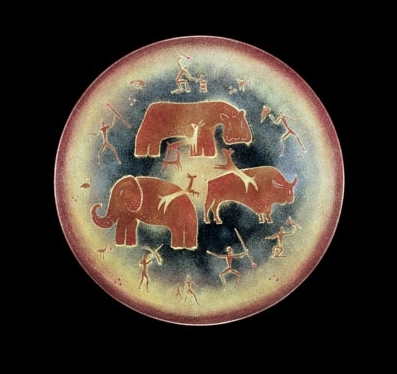 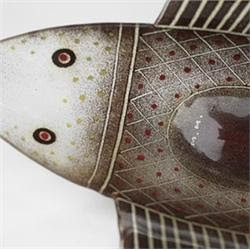 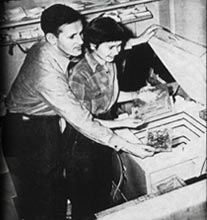 Michael and Francis Higgins’ were a husband-and-wife team who produced commercial tableware for Dearborn Glass.Both studied at the Chicago Institute of Design. The couple individually created unique hinged boxes, mobiles, flat panels and vessel forms that were distinguished by bold geometric patterns and innovative techniques that retain their freshness with their delicate designs. 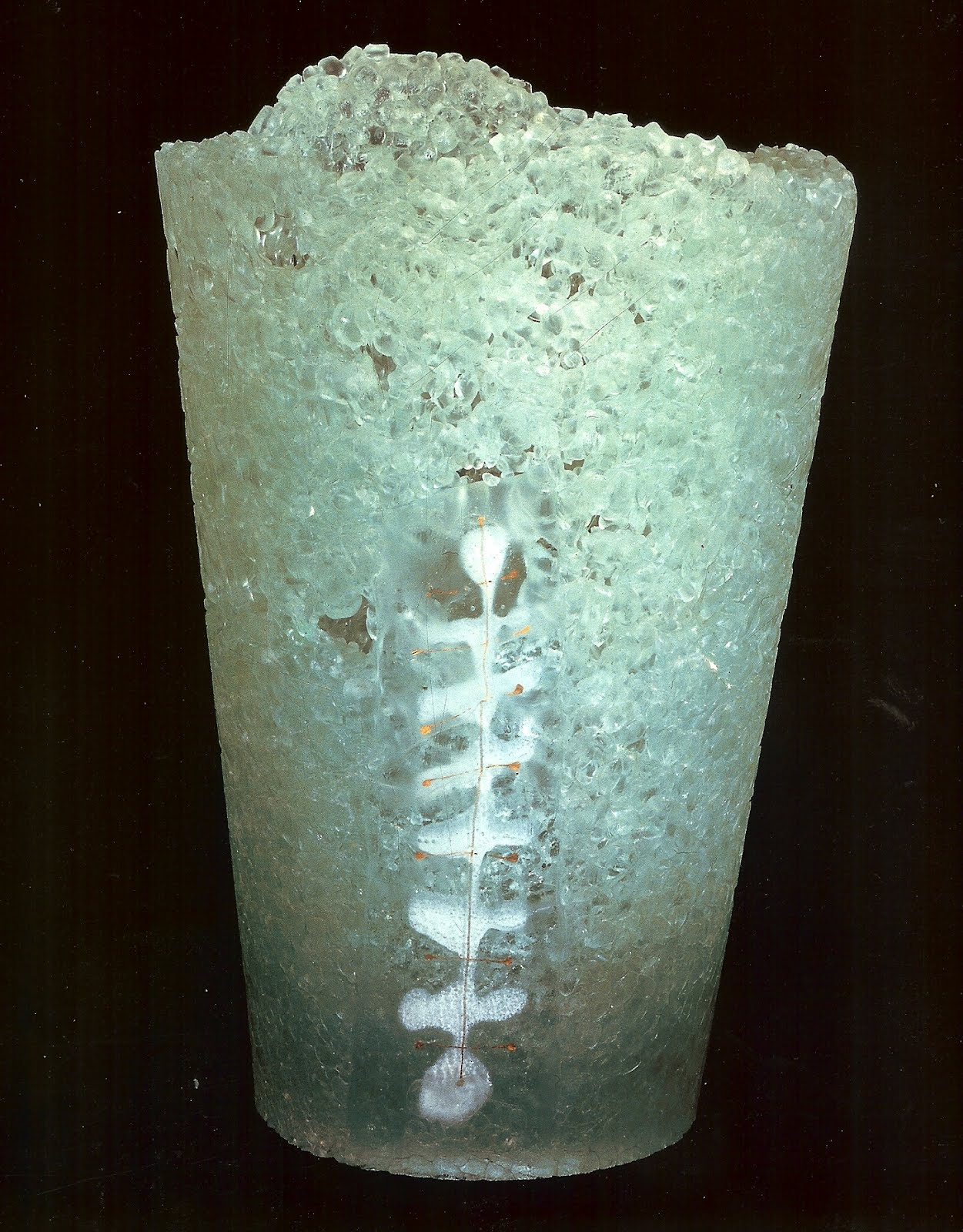 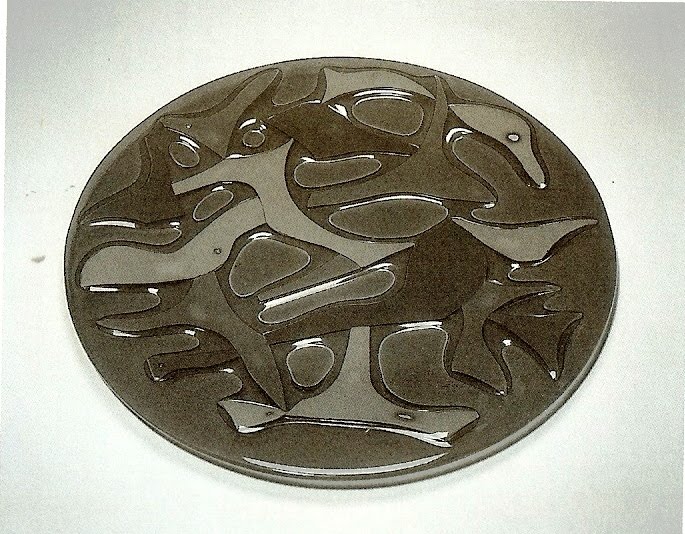 plate, 1960’s Michael & Frances Higginskiln-formed glass
.
.
Edris Eckhardt, a well known Cleveland School artist, is recognized for her virtuosity in ceramics, enamels, and glass work, invented her own glass formulas to create her sculpture. She may have been the first American studio glass artist to formulate her own batch instead of simply melting cullet. Eckhardt changed her first name to Edris, after a genderless angel, after being declined for an art school scholarship based solely on her gender.
. 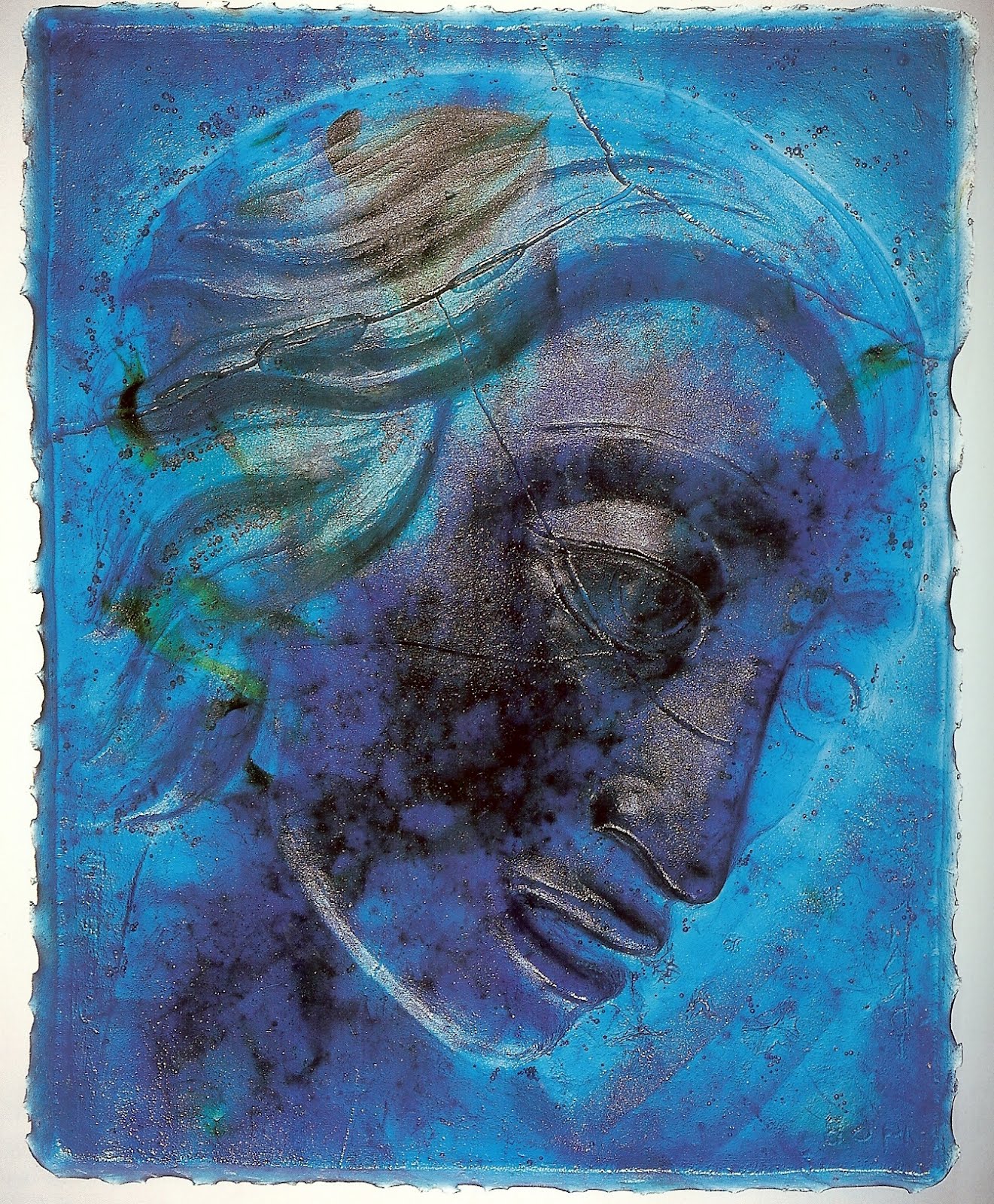 Uriel, 1968. Erdis Eckhardt
cast glass. Corning Museum of Glass
.
This year, the Museum of American Glass at WheatonArts has the above artists featured in an exhibit titled “Pioneers of American Studio Glass“, now thru 12/30/2012.
.
.

For the glass practitioner, collector or scholar, there were few published information sources were available, beyond meeting the artist in person. Teaching about glass making – or “glass technology” would, at best be taught in a school’s manual arts curriculum or as a hobby. First published in 1942, the craft magazine Craft Horizons provided limited information about glass techniques, but typical of the focus on the arts, it had three times more information about other craft media as on glass. The magazine later became American Craft in 1979 and was redesigned with an expanded awareness of studio glass.

1944 Craft Horizons and 2012 American Craft Magazine
.
Early books about glass offered technical advice, a general history of glass, or the occasional survey of contemporary work. Information about glass was available only in industrial manuals, amongst them “The Art of Glassmaking” (1947) by Sydney Waugh, a designer for Corning Glass. Waugh’s book included declarations that glass could only be made in large factories.
.
California artist Kay Kinney studied glazes and ceramics and later experimented with glass in the early 1960’s. Kinney’s book “Glass Craft: Designing, Forming, Decoration” (1962) was written long before the “fusing-compatible” era. Her book has information about mold-making, fusing and slumping projects utilizing window glass, bottles, and other types of glass.
. 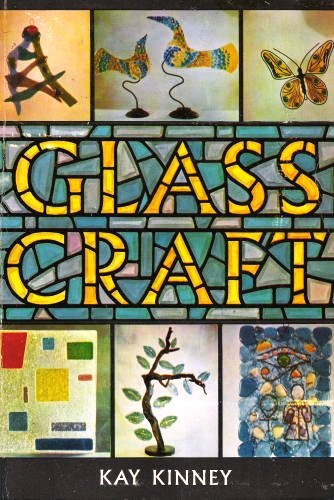 Kinney’s book was written for glass novices, with simple, straightforward instructions on cutting and fusing.

The Toledo Workshops were indeed a watershed. After the workshops, glassmaking programs entered the college, university and fine arts programs. Other venues for glass study began opening up, and established regional craft centers like Haystack Mountain School of Crafts, Penland School of Craft had more intensive learning opportunities. By 1973, glass programs had penetrated the university and craft world to the extent that Glass Art Magazine listed seventy educational programs. This expansion had a profound effect on the establishment of the critical mass of artists devoted to learning about, producing, and promoting studio made glass. Additionally, the G.I. Bill, started in the 1940’s, had a strong effect on the lives if the returning veterans. That bill, (as did the later, similar Veterans Acts under the Johnson, Nixon and the Ford Administrations) through the mid 1970’s – offered veterans a college scholarship to any college of their choice. As it turned out, art school was very attractive and glass blowing extremely attractive. There were glass programs across the country. By the time the GI Bill was gone, so were the glass programs.