Last month CulturalDC formally announced the summer 2013 opening of the Monroe Street Market artist community, featuring 27 artists’ studios just steps from the Brookland Metro Station and has launched a series of open houses to introduce artists to the community and application process (read our full coverage of the first open house here).  Their second open house on December 1st featured an on-site, hard hat tour and East City Art was invited along for a sneak peek as the buildings take shape. 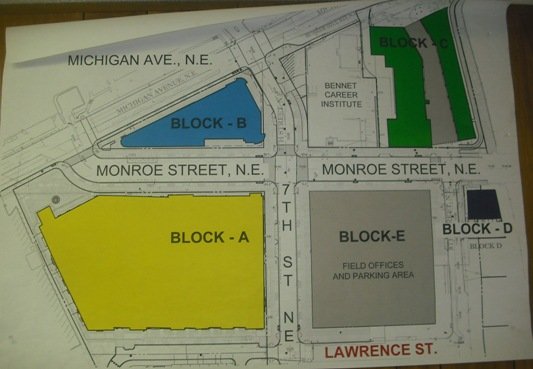 The studios are located in “Block C” (in the upper right hand corner in green on this construction office map) and center on an arts walk running between the two buildings.  The walk opens into an open air plaza at the foot of the Michigan Avenue overpass that will be the site of concerts and other activities during warm weather.

The tour began with a quick overview from Mike Henehan, Vice President at Bozzuto Development, one of construction partners (Bozzuto will manage the entire development, including the arts walk).   Of the three blocks under development, Block C with the artist studios is the furthest along, and Henehan reiterated their expectation that artists will begin moving into their spaces in July, 2013. 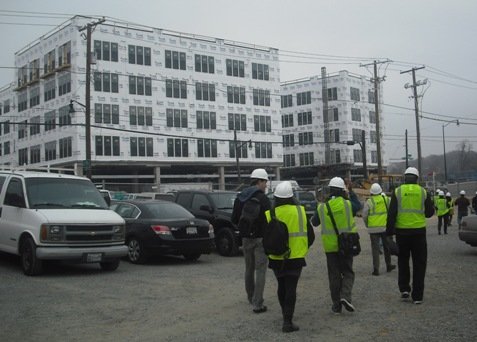 Adorned in hardhats and safety vests, we left the construction trailer and headed across  Monroe Avenue. into the arts courtyard.  The southern ends of the two buildings along Monroe (seen above) will contain three retail spaces (Henehan pointed out an area for cafe tables, hinting that perhaps one of them will be food related).  The artist studios will line the central path in between the two buildings. 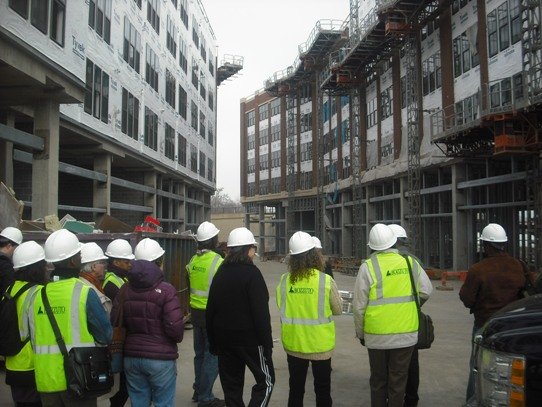 As we entered the top of the arts walk, the generous heights of the studios became more apparent.  In the photo above, the open first floor will contain the studios.  The floors above (currently being bricked) will contain 152 apartments.  The studios, whose ceiling height will soar up to 25 feet, will be fronted by glass garage doors that can roll up and provide direct access to the central walk. 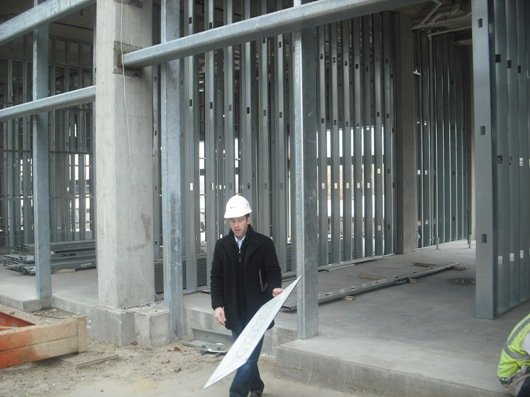 Henehan stops for a moment to give the group more details on the studios.  In the pictures above and below, we are standing outside of the east building, housing studios 12-27.  The studios range in size from approximately 300 to 630 square feet.  The two studios shown below are approximately 450 square feet.  Along with the roll-up garage doors, each unit will have an entry vestibule with a traditional door. 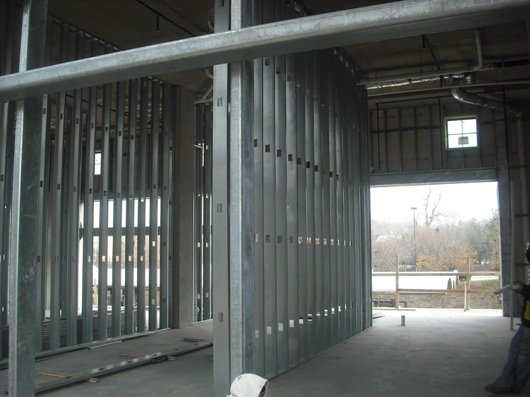 The photo above shows the framing going up for the walls that will separate each studio.  These two units will share one lavatory at the back of the unit.  Each unit will also have a storage area and slop sink.  While the ceilings are not finished, Henehan pointed out the fire sprinkler heads, which indicate the height of the ceilings.  Hidden behind the steel framing are a variety of pipes and wires hanging down that will eventually feed into each units’ heating/air conditioning system. 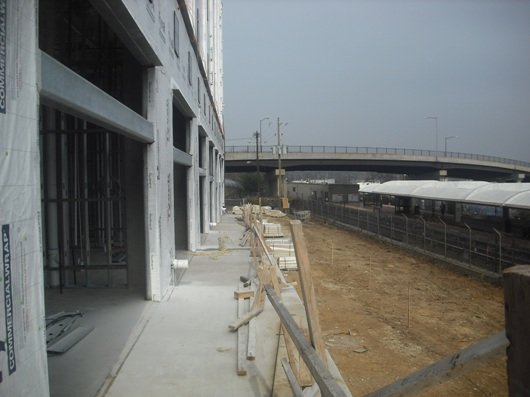 Several units in the eastern building feature shared patios!  This photo shows the patios as they slope down the hill.  On the right is the Brookland metro station, and the dirt area between the patios and tracks will be the Metropolitan Branch Bike Trail.  The patios will be about three feet above grade and fenced in as well. 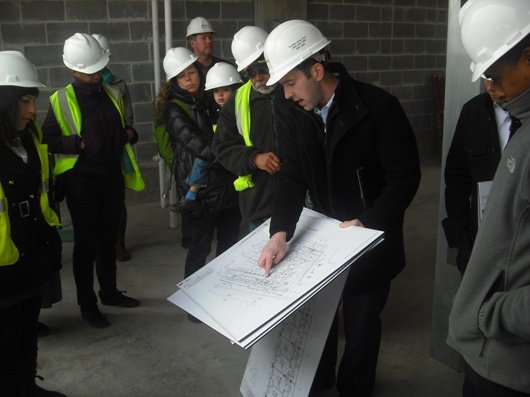 Here Henehan is explaining the layout of the rest rooms, as well as the location of the studios’ common lounge and loading dock.  Both the lounge and dock are located in the west building.  The lounge will be shared space for all artists and contain mailboxes for each studio.  The loading dock is actually behind the west building, but a passageway runs through the west building into the arts walk, allowing artists in the east building direct access.  It should be noted that there is one level of underground parking, with some units set aside for the artists (parking rental is extra). 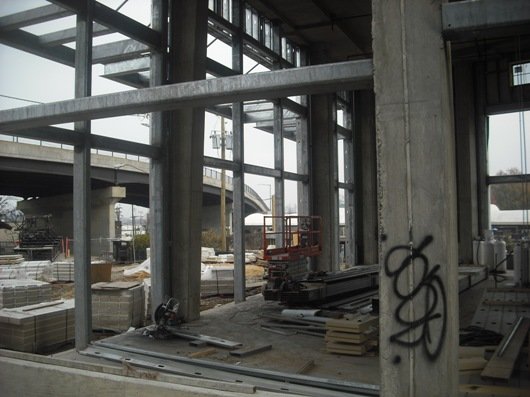 Units 25-27 will  front the community plaza.  In the background is the Michigan Avenue bridge that spans the metro tracks.  The metro entrance is located under the bridge — less than a thirty second walk away. 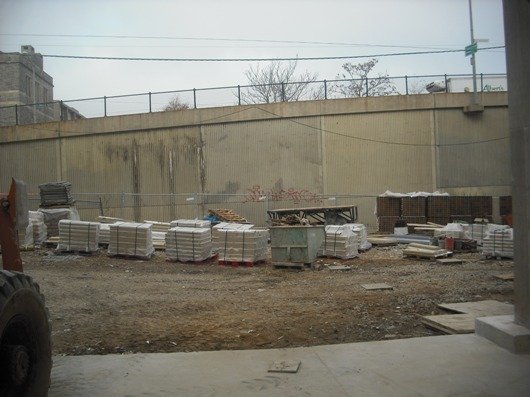 This is the current view of the plaza from studios on the north end of both buildings.  When finished, this will be a “green wall” with a variety of vertical plantings fronted by a water feature and a small stage.  An eighty foot tower will also rise from the plaza, acting as a neighborhood landmark. 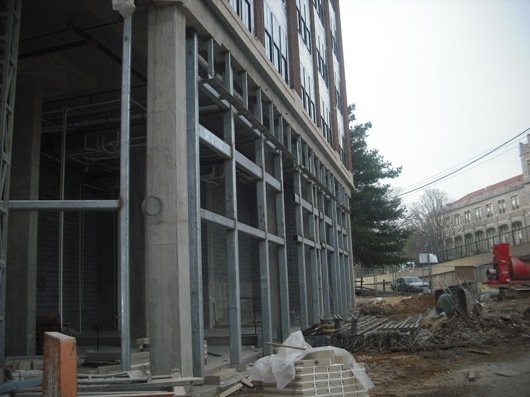 Above and below are more views of the plaza.  The top photo includes three studios in the west building.  The photo below, looking west from the top of the plaza, shows the size of the space.  The power lines will eventually be moved below ground, and the current street will be turned into a pedestrian walkway to give access to the rest of the Monroe Street Market Development. 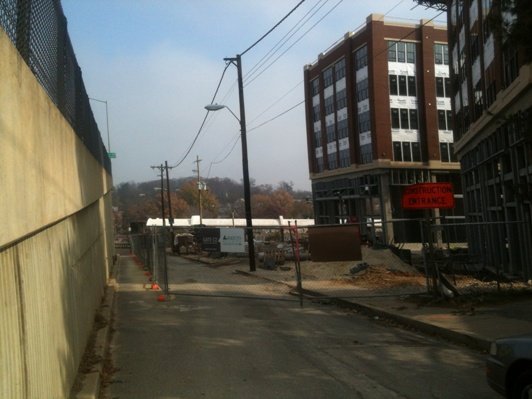 As our tour came to an end, we took one more look back through the development.  The finishing touches are only seven months away! 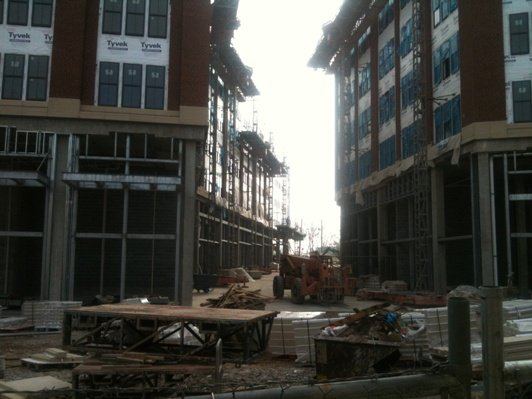 CulturalDC will be open the application process for studios in December.  For more information on how to apply for studio space, or to sign up for a future information session, please visit their website here.