The Mount Rainier Artists’ Lofts occupies a prime city location directly on the Mount Rainier traffic circle, demonstrating the importance of the arts in this bohemian community.  In years past however, few of its residents actively participated in the Gateway Arts District annual Open Studios Tour.  Things are changing in 2012!   For this year’s Open Studios on Saturday, May 12th, two residents are giving this unique space its due by organizing arts performances and a pop-up gallery directly on Rhode Island Avenue.  East City Art sat down in the studio with the organizer for an exhaustive run-down of the afternoon.

The arts’ showcase is the brainchild of painter and resident Monica Perdomo.  Ms. Perdomo has lived in the building for several years and loves that the residents have created a warm, nurturing environment with their neighbors.  It was during her 2011 residency at the Gateway Arts Center that she began to fully embrace the depth of artistry in the neighborhood.  Her neighborhood explorations also opened her eyes to the rich Latino culture in the neighborhood, a group she notes does not always have access to the arts.  She noted that the Gateway Open House weekend would be the perfect opportunity to begin integrating the Artspace lofts into the wider community.  Along with pianist (and resident) Philippa Smith-Tyler, Ms. Perdomo is opening a pop-up gallery in the building’s commercial spaces and organizing a full roster of music and performing arts.  To help foster this nascent spirit of community outreach,  the two residents have also invited artists of the new Brookland Artspace Loftsto participate.  Ms. Perdomo will also be hosting a bilingual arts workshop for neighborhood grade-school youth at 3pm in her studio. 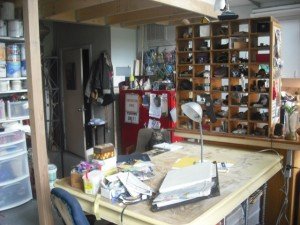 After touring the studio (we couldn’t help snapping a few photos), we moved downstairs to tour the pop-gallery, located in two, unused retail storefronts on the street level of the building.  The day we visited, Ms. Perdomo was in the midst of receiving works from the dozen artists participating in the gallery show.  The large, airy space with windows onto Rhode Island Avenue is perfect for a gallery (perhaps one will open here sometime soon!), and works of art were gently propped along the walls, ready for hanging.  Directly across the lobby is the Urban Eats Arts and Music Cafe, which will be co-hosting the musical line-up.  Ms. Smith-Tyler has organized a performance space for musicians(from classical to Go-go) directly on cafe’s sidewalk space, as well as roving performance artists inside the gallery.

The pop-up gallery and performances will continue all afternoon.  Be sure to include the Art Lofts on your itinerary on May 12th!  For more information about the Gateway Arts District 8th annual Open Studio’s tour, click here.