I always enjoyed teaching Vermeer in the art survey courses I taught for many years.  Although not a specialist in this area of art history, and perhaps because of that, I felt free to wax heartily on the delicacy of his vision, on how different he was from his peers in the Netherlands in the mid-seventeenth century—not only in the way he presented his genre subjects, but specifically in his technique.  I always spoke about the extraordinary finesse of his luminous surfaces, and his achievement in the small number of surviving works of an expressive eloquence, of what might be called a visual poetry unmatched by his contemporaries.

My fascination with the apparent distinctions of Vermeer’s technique made me jump at the chance to hear a lecture given at the National Gallery revealing the results of two years of extensive research on the museum’s three paintings by and one attributed to the artist.  I have long felt that we were especially fortunate to have Vermeer’s Woman Holding a Balance, Woman Writing and Girl with a Red Hat in a public collection here in Washington DC.  The fourth painting, Girl with a Flute, always seemed wrong to me, although it is only now that I understand why, and how it is quite certain that Vermeer did not paint it, although someone in his orbit apparently must have done.

The paintings were examined with an amazing array of noninvasive conservation tools including magnified images of tiny portions of surfaces, analysis of microsamples of pigment, plus some new techniques reflecting the latest advances in scientific imaging.  These permitted a quantum leap in our understanding the way Vermeer created his works, in part altering ideas that have become commonplace because of the apparent perfection of his surfaces.  Among the most interesting of their revelations is the fact that although the upper paint level was applied with the utmost control and discipline to achieve the shimmering detail and description of objects, beneath the surface a remarkably different approach can now be seen.  Vermeer actually worked with a very free brush at this level.  The painted sketch and underpaint reveal a freedom with composition and drawing that are belied by the control of the surface.  The significance of these findings adds to our understanding of Vermeer’s uniqueness within the context of his career.

Vermeer’s subjects in pictures like the ones at the National Gallery (NGA), termed “high-life genre” featuring the well-to-do class that were his patrons, were similar to those presented by his competitors.  While contemporary viewers will often remark on what they see as nearly photographic accuracy in his representation of figures, clothing and objects, when we closely observe his technique it is evident that he was actually quite the opposite.  Like his contemporaries, artists like Gerrit Dou, Gerard ter Borch and Frans van Mieris, Vermeer worked wet into wet, but not to save time.  In fact, he applied his final paint surface at a slow pace allowing him to blur the details and the edges with strokes of fluid pigment.  The results are a softening and atmospheric unity that was unique to him and which must have seemed so to seventeenth-century collectors.  He used this technique to abstract his depiction of light which rather than appearing in flat planes, envelopes his figures and their spaces in a luminous surround. 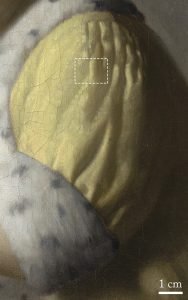 The question of whether Vermeer used a camera obscura in composing and rendering his compositions has been around for decades.  The particular way he painted highlights with circular strokes has been said to have been derived from images seen in a camera obscura.  However, some of the NGA’s research has shown that while the artist may have used a lens of this kind, he did not simply reproduce images in this way.  It is likely that Vermeer, like many others, would have been interested in what the camera obscura could offer, especially in terms of the tonal and reflective areas of the composition.  However, analysis of his actual use of these was selective and limited, “a strong indication,” in the words of the conservators, “that he was not simply replicating a projected image.”[1]

Another interesting point that came out with this research concerns Vermeer’s choices of painting supports and grounds.  Vermeer used very finely woven canvases purchased from specialist art suppliers that in all probability were already prepared with the ground layer he would have specified for each painting.  In choosing a surface to which he would apply his costly pigments, he apparently favored light grounds of lead white that were lightly tinted with earth colors and black.  According to the conservators, he used a warm gray for Lady Writing and a buff beige for Woman Holding a Balance.[2]

Among the most fascinating outcomes of the research is the rejection of the attribution of Girl with a Flute to Vermeer.  The painting bears a number of similarities to the authenticated Girl with a Red Hat.  They are both on wood supports and rather small.  They both show a young woman in a fancy hat seated in a similar chair against a tapestry background. The same pigments are found in both, but the paint handling and the order in which it was laid down on the surface is very different. 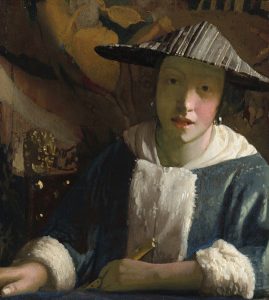 Vermeer ground his pigments coarsely for the underpaint—including that free-hand sketching on the lower levels.  For his final layers, he ground the pigments far more finely to get the smooth results that we see.  The artist who painted Girl with a Flute reversed this order: the pigments on the surface layer are coarsely ground giving a rough and grainy appearance, even projecting from the surface. This latter is very noticeable to any viewer, but analysis showed that not only were the pigments coarsely ground, but the paint surface contains “a mass of broken bristles indicating either an old or poorly made brush, or that the artist used unusual force in applying the paint”[3]—something that Vermeer never did.  Apart from this, the dullness of the girl’s expression, the botched application of Vermeer’s characteristic greenish shadows, the boneless right hand, and the odd highlights all point away from Vermeer’s hand.

The question of who this artist may have been brings up a number of possibilities, but it does seem that it was someone who knew Vermeer and may even have been working in his studio—a revolutionary notion that would overturn a long held image of the artist working alone in his house in the Delft Catholic ghetto where he and his family lived. The limit of compositional settings for many of his “high-life genres” and the frequent use of his wife as a model have encouraged this idea, which may, in fact, be wrong.

All four paintings have been promised for the upcoming exhaustive retrospective exhibit to open at the Rijksmuseum in Amsterdam in February 2023 that will display 28 of Vermeer’s surviving 35 or 36 works.  However, creating something of a transatlantic stand-off, the Dutch museum curators have refused to accept the NGA’s conclusions about Girl with a Flute. They will exhibit it not as “attributed,” but as they have indicated, based on their own research of their larger holdings of Vermeer paintings, as an authentic Vermeer. They have suggested that the artist may have been experimenting with this small work. The findings of the NGA team will only appear in the catalogue to the show.[4]  One has to admit that they must find it hard to give up, but with the evidence provided, there is little doubt that this is probably wishful thinking.