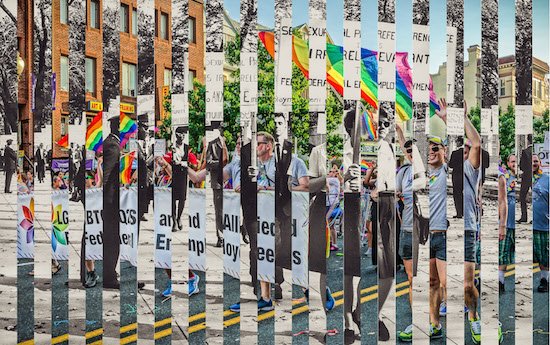 Photographer Sally Canzoneri presents viewers with lenticular photographs that chronicle the DMV’s evolving landscape through images that are not just moving—they move. As viewers walk past the lenticulars, the photographs perform a pas de deux between now-and-then – flipping between past and present, black and white to technicolor, historical to contemporary. Double Takes will be on view at The Art League gallery from January 10 to February 4, 2018.

With a background in law and city planning, Canzoneri began her research for Double Takes by carefully considering historical photographs of the Washington area and assessing their potential to be paired with a present day companion. Her photographic duets have historical or cultural significance – both then and today. When paired together, the photographs emphasize the changes that have occurred between the two exposures, whether it be social, political, physical—or all three—as showcased in her photographs of H Street and the NOMA neighborhood. After Canzoneri photographs the present day site of each chosen historical image, making sure to capture it at the exact same angle, her visual maneuvers are constructed by hand. The photographs are printed, meticulously folded, pleated like an accordion, and mounted onto their backing. The final results are three dimensional, sculptural even.

Canzoneri believes that presenting the photographs in lenticular form—transforming them into a kinetic experience—will resonate with her audience more than if the past-and-present photographs were simply hung side-by-side. The act of passing back and forth in front of the lenticular allows viewers to experience the passage of time in a novel, interactive medium. According to the artist, “There is something about the fun of the visual trick that draws viewers in.” Canzoneri hopes that by delighting viewers with her photographic illusions, they will be inspired to learn more about the history behind the images and reconsider their own neighborhoods as places of historical significance. According to Canzoneri, “Art is good for getting people to look at their environment with fresh eyes.”

Sally Canzoneri lives and works in Washington, DC, where she pursues her passion for photography, book arts, and freelance writing. As a multi-media artist, Canzoneri has had her work featured in numerous juried exhibitions and solo shows, showcasing both her artist books and photography. Canzoneri interest in the cultural, political, and architectural history of the DMV reflects her expertise in law and city planning, having received her B.A. from Bennington College and a M.U.P. and J.D. from the University of Illinois.