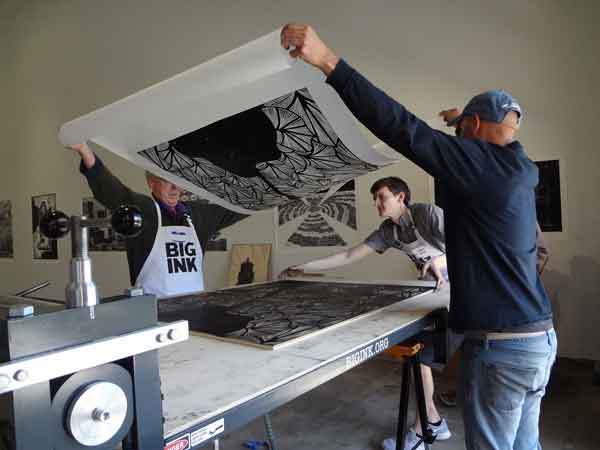 You can catch the Big Tuna, a portable print press whose girth inspired its name, in action as it reels off large-scale works by 20 area artists Saturday and Sunday, October 9 & 10 at Pyramid Atlantic Art Center, 4318 Gallatin Street in Hyattsville, MD.

All the work leads up to a two-day public demonstration this weekend as the press produces paper prints from the woodblocks — essentially giant wooden stamps up to 4 feet by 8 feet, Castonguay said.

“Seeing woodblocks printed at this scale is impressive,” Castonguay. “(It’s) like magic. The woodblock is inked, sent through the press, and an image appears on the paper. It’s like watching a rabbit pulled out of a hat.”

BIG INK in 2016 raised $13,000 to build a traveling printing press, which could be assembled in museums, universities, art centers, galleries, and beyond. The company tours the country hosting workshops with the press. 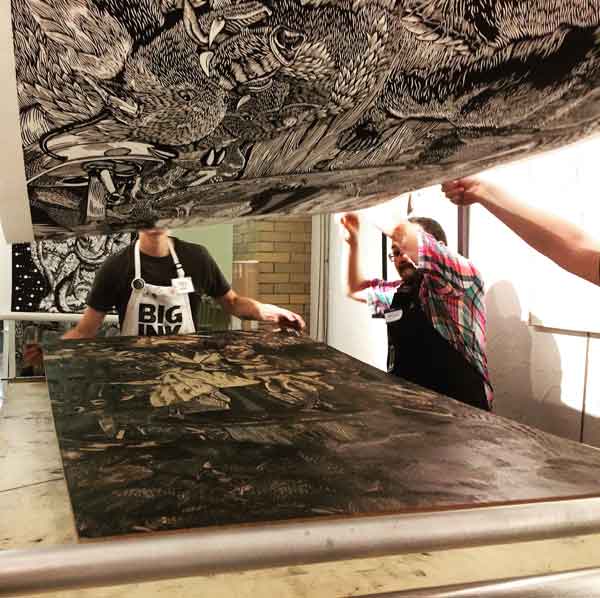 Pyramid Atlantic Art Center will be open to visitors from 11am to 4pm each day. There will be a hands-on community art-making activity.

“This year is BIG INK’s largest gathering at Pyramid to date,” Castonguay said. 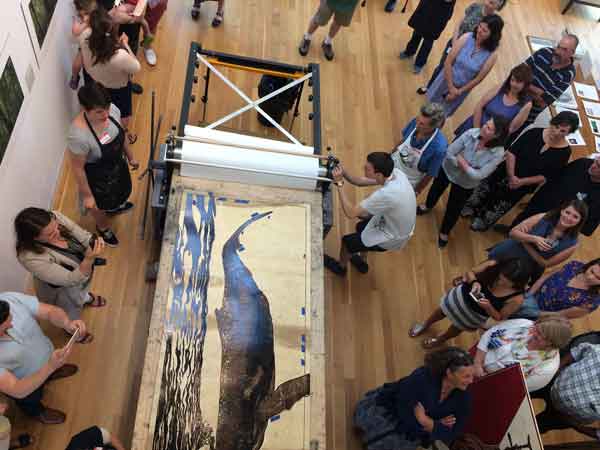 About BIG INK
BIG INK is founded and directed by Lyell Castonguay and Carand Burnet. The program began with Castonguay envisioning a community of like-minded artists who share an interest in large-scale woodblock printmaking. Recognizing most artists don’t have the technical expertise required to produce such work, Castonguay began to teach the process at community printmaking studios.

It became clear that artists beyond the local scene were interested in instruction. However, BIG INK had to overcome a hurdle to teach to a broad audience. A specialized press weighing over a ton is normally required. Plus, there are less than half a dozen large-format presses in the United States available for public use.

Up to this point, venues with a large-format press on-site hosted workshops. BIG INK needed portable equipment to visit more places. In 2016, BIG INK raised $13,000 through public support to build a press designed for routine travel called The Big Tuna. It’s made a lasting impression when assembled in museums, universities, art centers, galleries, and beyond. Given its modular construction, The Big Tuna is transportable virtually anywhere.

BIG INK now tours the country hosting workshops with their press. What started as a small-town project has grown into a national program. Each year more artists become aware of how satisfying it is to carve and print. Also, the public becomes better informed about the process by viewing the art BIG INK participants create.

Since its founding in 2012, BIG INK has visited dozens of cities across the country and created thousands of prints. To learn more about the program and to apply to participate, please visit bigink.org

On View: October 16, 2021 - January 9, 2022 During its centennial year, The Phillips Collection is showcasing the artwork of the prolific artist David Driskell (1931–2020). Featuring over 50 works, David Driskell: Icons of Nature and History offers the first comprehensive examination of the paintings, collages, prints, and drawings of the...

An opening is scheduled for Saturday, October 23 from 1pm to 6pm.

An opening reception is scheduled for Friday, October 15 from 5pmto 8pm.