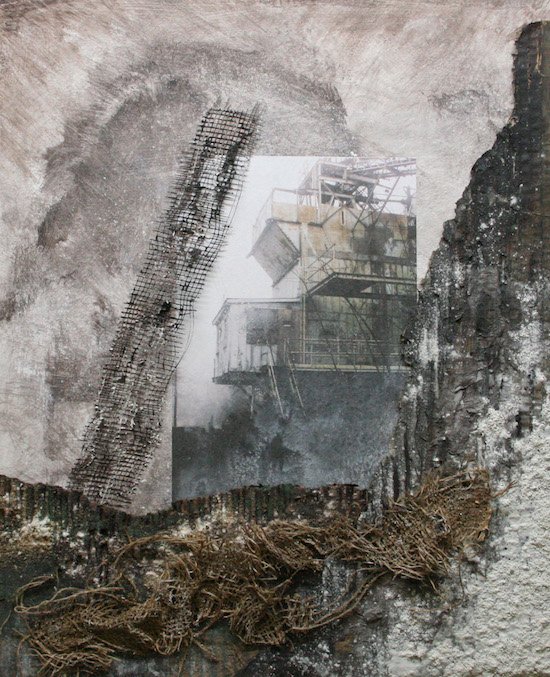 Creating environments to support photographic images of sites found in a state of dereliction, Cedric Williams observes the ways in which buildings, surfaces and structures change upon abandonment. Fascinated with erosion, his most recent work focuses on the decay at three sites: an abandoned slate quarry in North Wales, a now demolished cement factory in Maryland, and World War II remains washed up on the coast of Delaware. Using wood panels, cardboard, or vellum as his base, Williams adds plaster, sand, gravel, dried roots, rusted metal, cloth, broken glass, corrugated cardboard, and other materials to gain texture and depth as he constructs mixed media collages that include photographs of deteriorating sites. Including dried organic materials and found objects, which he sometimes collects from the actual sites, the artist regards these materials as an extension of the photographic images, enabling him to more fully reference the processes of aging and decay.

Williams, who was born in Llangollen, North Wales, UK and earned his BFA at Gloucestershire College of Art and Design, has always used photographs and paintings to periodically catalogue the decay of different sites that have interested him during his lifetime. In recent years he has begun to explore the possibilities of utilizing photographic images in a new way. Rather than just framing his photographic prints for exhibitions, he began placing them in settings he considered to be compatible with the images. In the studio, Williams has introduced a variety of different methods and materials to build environments that support his photographic images.

For his solo exhibition, entitled Derelcition, Williams has displayed 22 mixed media works from three different series in the Terrace Gallery at BlackRock. The artist explains, “I frequently use certain photographs or combinations of photographs repeatedly, in order to explore different ‘environments’ or ‘settings’ for them.” The reuse of images is apparent in works like “Cement Factory 12” and “Cement Factory 10” from a series depicting a cement factory once located in Kensington, MD. Williams goes on to say, “I do not attempt to form a narrative link between the photographic images and the associated materials.” With or without a narrative, the images and materials form a powerful relationship in works like WWII Gate and WWII Remains, which include cloth, rusted metal and fencing remains from World War II washed up on the coast of Delaware. “The materials are to be regarded as an extension of the images, their reference indicating the more diverse processes of aging and decay,” says the artist. This extension is clear in the works Quarry Moel Fferna 3 and Quarry Moel Fferna 9, which include images and objects from a derelict slate quarry in Williams’ native North Wales, UK which he visited in his youth.

ABOUT THE ARTIST:
Cedric Williams was born in Llangollen, North Wales, UK. He earned a BA in Art and Art History from the Gloucestershire College of Art and Design in Gloucester, United Kingdom. His paintings and photographs were exhibited in North Wales and London. After relocating to the U.S. with his family, Williams continued his photography practice but began to produce a radically different style of work which integrates his photographs into mixed media assemblages. Since 2005, Williams has been exhibiting his work in the Washington, DC area. A solo exhibition of his work was presented in the Library Gallery at Montpelier Art Center in Laurel, MD, and he had a two-person show at Studio Gallery in Washington, DC. His work has been included in numerous group exhibitions, to include Workhouse Art Center, Lorton, VA; VisArts, Rockville, MD; Fischer Art Gallery in the Rachel M. Schlesinger Concert Hall and Arts Center at Northern Virginia Community College, Alexandria, VA; Montpelier Art Center, Laurel, MD; Studio Gallery, Washington, DC; Plas Newydd Gallery, North Wales; Burgh House Gallery, London; Barclays Bank, London; Camden Arts Center, London. Williams’ photographs have won competitions sponsored by Creative Camera magazine, and awards in exhibitions sponsored by the Patuxent Art League in Maryland, and the Haringey Arts Council in London. Williams lives and works in Kensington, MD.

BlackRock Center for the Arts is located at 12901 Town Commons Drive, Germantown, MD.