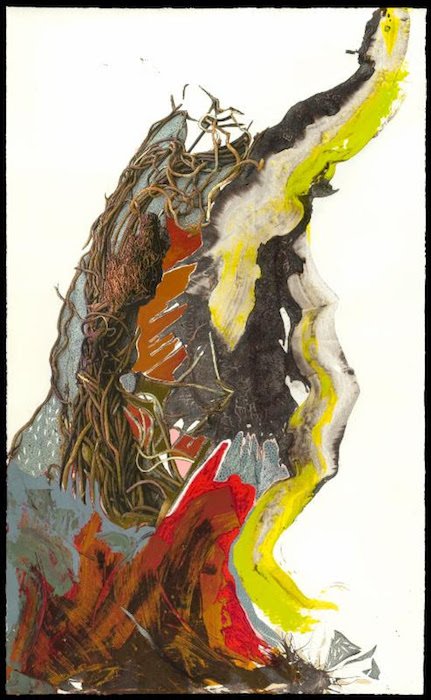 Sounds from the Sea VIII by Martha Jackson Jarvis. Courtesy of Honfleur Gallery.

Martha Jackson Jarvis draws an analogy to jazz sound waves, rhythms, and vibrations that inform and influence marine life and patterns of an evolving world in her new exhibit Sounds from the Sea in Honfleur Gallery. Influenced by found relics of various seaweed specimens along the Monterey coast, Jackson captured and manipulated images as elements of drawn form.

Martha Jackson Jarvis grew up in Lynchburg, Virginia and Philadelphia, Pennsylvania and currently lives and works in Washington, D.C. She studied at Howard University and received a BFA degree from the Tyler School of Art at Temple University and a MFA from Antioch University. Jackson Jarvis also studied mosaic techniques and stone cutting in Ravenna, Italy. Her sculptures have been exhibited in solo and group exhibitions in galleries and museums throughout the United States and abroad, including the Corcoran Gallery of Art in Washington, D.C.; the Studio Museum of Harlem, N.Y.; Southeastern Center for Contemporary Art in Winston-Salem, N.C.; Anacostia Museum in Washington, D.C. and the Tretyakov Gallery Moscow, U.S.S.R.

Jarvis’ work explores issues of conservation and people’s relationship to natural materials and landscapes. She draws uncommon analogies between disparate forms, objects and materials to construct narratives of real and imagined landscapes. Exploring the energy in materials, their emanating auras, textures and sources of power, Jarvis says, “Stories humans tell are narratives of survival, identity, power, success, and failure, they are stories of origins and creation that reach into ancestry and simultaneously extend a path and direction to future generations.”