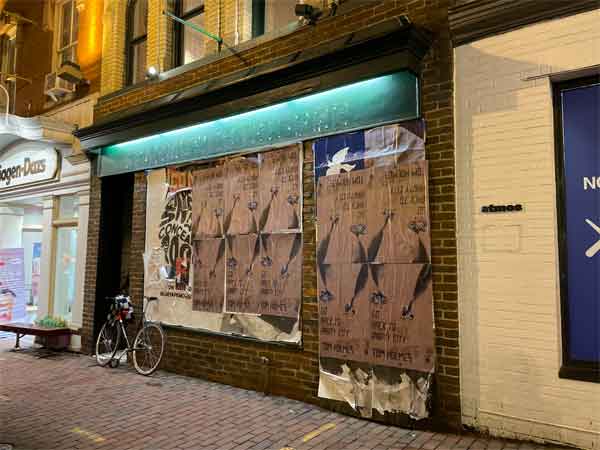 von ammon co is pleased to announce its sixteenth project at its Cady’s Alley location: Go Back to PARTYCITY®, a solo show by Tennessee-based artist Tom Holmes. The show will consist of over a dozen oil paintings on clear primed linen supports. Preferring a more perfunctory installation method, the artist will forgo a traditional wall installation and will place each work on a steel folding chair, which will allow the paintings inhabit the gallery’s peculiar space sculpturally.

The conventional memento mori is not only a reminder of inevitable death but also of the entropy of the physical world: objects hold their form for an instant, and gradually return to the soil. The subjects depicted in Holmes’ paintings—costumes and decor selected from the aisles of the Party City™ chain of retail stores—are made predominantly of polyester products: they will resist decomposition better than the mortal bodies who possess them, and will likely even outlast the linen, stretcher bars and earth pigments of the paintings that make up this exhibition. The tradition of vanitas painting inhabits the art historical epochs prior to 1907, at which point the invention of plastic supplanted the more terrestrial ivory, ceramic and wood as the preferred material for the creation of masks, toys, and other ephemera.

Erosion and decay are central concerns of the artist’s overall project: in one series of paintings and sculptures, the rakish grins of Boo Berry™ and Frankenberry™ presage the decline of the American child’s body via harmful processed ingredients; in another, ad hoc memorials for victims of mass shootings, made of plastic flowers, teddies and buntings, hold their form against the elements. Go Back to PARTYCITY® focuses on objects poised for degradation: pristine for a geological instant—the injection-molded jack-o-lantern, the powder blue gender-reveal garland, the mylar balloon—these will not dissolve into loam like the skull or the lily, but into a sort of sedimentary Funfetti™ in the fossil record.

Go Back to PARTYCITY® will be on view antipodally to Halloween. The paintings are tributes not only to the discarded but persistent scurf of lapsed celebrations, but also to the relentless agglomeration of discarded memories in the post-industrial / post-plastic human experience. While the vanitas was a commemoration of the ripening of our bodies and the crumbling of our valued possessions, these canvases augur a future where the past is prone for disposal but stubborn in its persistence and immune to rot.

The show’s namesake not only refers to the American retail chain—which hosts a perennial Halloween aisle, and sections to supply any milestone in the human lifespan with disposable decor and costumes—but to the synecdochic PARTYCITY® which has come to represent the bête noir of all chic and culturally durable pursuits. While the provenance of many of the artist’s subjects is the chain, they signify all things that painting has historically tried to resist: bad taste, decoration per se, and—most saliently—obsolescence.

The reception is scheduled for Saturday, October 8 from 7pm to 10pm.

The exhibition will be on view through October 2022.

An opening reception is scheduled for Saturday, October 8 at 7:30pm.

An opening reception is scheduled for Saturday, October 8 from 5:30pm to 7:30pm.