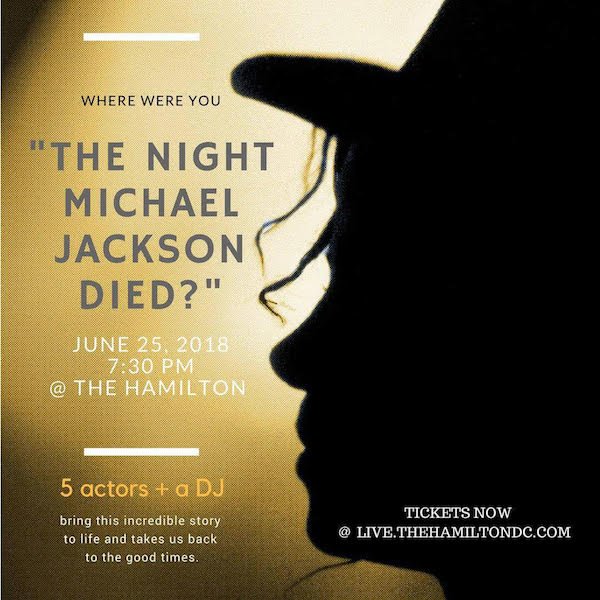 We Act Radio is proud to announce the cast and a special dramatic stage reading of The Night Michael Jackson Died.

On Monday, June 25 be one of the first to witness the stage reading before full-production hits the Atlas Theatre stages in 2019. The Night Michael Jackson Died stage reading will take place at The Hamilton—DC’s newest destination for envelope-pushing, visionary music and talent from the artistic underground— is located at 600 14th Street NW, Washington, DC 20005. Doors open at 6:30PM and the show starts at 7:30PM. Tickets can be purchased online at the Hamilton by clicking here or at Ticketfly by clicking here.

About Kymone Freeman
Kymone Freeman is an award-winning playwright, activist and commentator. He is the subject of one chapter of the book Beat of a Different Drum: The Untold Stories of African Americans Forging Their Own Paths in Work and Life (Hyperion). He is a 2010 Green for All Fellow & co-founder of We Act Radio DC’s Best Social Justice Radio Station 2017 by Washington City Paper and 1st Place 2017 PRNDI Award winner for his Lion and the Map Commentary from the Anacostia Unmapped radio series on WAMU/ NPR’s most successful local production in 2016. He was featured as a contributing writer in the most controversial Ebony Magazine in recent history and PBS Online Film Festival for his short film Fresh Prince of Anacostia.

Quotes from the play:
“He bought the Beatles Catalog. He owned 50% of Sony publishing. He called Tommy Mottola the devil. If I was Prince I would watch my back beefing with Warner Brothers.” – #NiteMJDied

“He was the biggest artist in the history of the entire world and probably one of the biggest philanthropists too. What he did for the world and what he did to himself… someone should study his bones.” – #NiteMJDied

An opening reception is scheduled for Saturday, July 9 from 7pm to 9pm | Exhibitions include: A Journey Not Soon Forgotten includes work by nine immigrant or first-generation artists

An opening reception is scheduled for Reception: Friday, July 1 from 6pm to 8pm.

An opening reception is scheduled for Saturday, July 2 at 7pm.

An artist reception is scheduled for Saturday, July 9 from 6pm to 8pm.

An opening reception is scheduled for Friday, July 1 from 7pm to 9pm.