A throng of people crowded the lot adjacent to the neighborhood market known as the Red Store at 2420 Martin Luther King, Jr. Ave. SE, the morning of October 21, 2017. The occasion was the rally and jam sponsored by Black Women for Positive Change in collaboration with the Alliance of Concerned Men DC (ACMDC) and joined by members of many like-minded civic and faith-based groups. Those assembled share the mission of expanding opportunities and reducing violence in their community.

The backdrop for the rally was a Go-Go-themed mural titled Many Voices, Many Beats, One City designed by Cory Stowers and sponsored by MuralsDC, a city-funded program intended to eradicate undesirable graffiti and create new public art.  The mural replaces a weathered older work by the same name, also by Stowers and his crew, completed in 2008.  The original mural, adored by the neighborhood, featured Go-Go “Godfather” Chuck Brown in silhouette atop Anacostia’s iconic Big Chair, thrumming his electric guitar. “I wanted the new mural to capture the broader story of Go-Go and its impact on the city, while also tying it more directly to the neighborhood,” Stowers explained. Andrew Cho, owner of The Red Store, liked the first mural, but was initially skeptical when Stowers approached him about the new project. “I wondered if people would miss the Big Chair,” he said.

In keeping with these goals, Stowers portrayed six popular, but now deceased, Go-Go musicians who were active on the scene in the ‘70s, ‘80s, ‘90s, and even today. The players are shown in concert, with their instruments, lined up as if playing on stage. Dramatic multicolored faux posters covered with the names of actual Go-Go bands, performers and shows separate and tower over the musicians, evoking the style of the actual broadsides that advertised the shows and adorned telephone poles “back in the day.”

Completed in July, clearly, this mural was the product of many talents and hands. Cory Stowers developed the concept and overall design of the mural, while Montu Mitchell designed the posters. Maria Miller, Ernesto Zelaya, and Nessar Jahanbin painted the musicians and Eric B. Ricks did the lighting effects. Eleven support artists were responsible for cleaning the wall, applying the base coat, sketching the shapes and hand-painting the typography (See full credit list below). 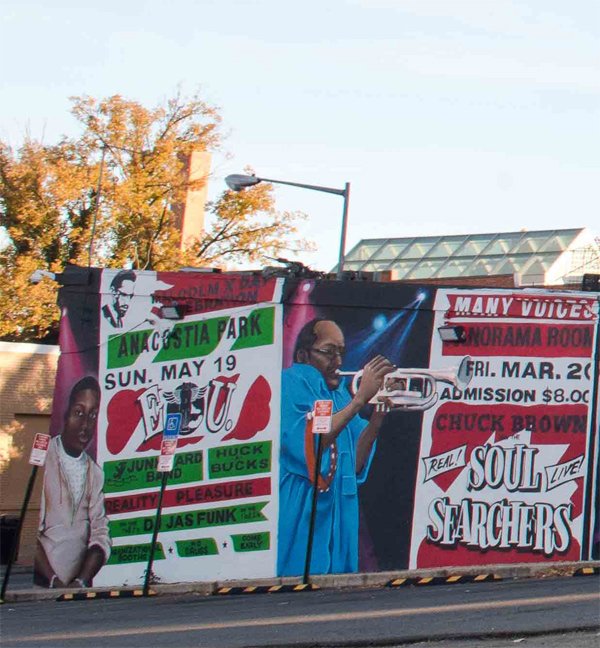 The location of the rally had a special connection to the mural. The youthful figure peering out from behind the curtain at the far-left edge is “Fat Rodney” (Rodney Tyrone Martin), the son of original AMCDC founder Rodney Parker. Fat Rodney worked with the prominent Anacostia-based band Rare Essence; despite his youth, he was considered the best Talker/Rapper in the city when he was killed in 1989 at the age of 21 in an altercation after a show. The tragedy inspired his father to found ACMDC in 1991. “Having my boy on the wall with Chuck Brown was tremendously uplifting and healing for our family,” he said.

Proceeding left to right, the next figure is Little Benny (Anthony Harley, b. 1963). A native of SE DC, Benny was only a senior at Ballou High School when Go-Go came onto the scene and in 1974 he joined Rare Essence. Benny was known for his powerful trumpet, booming voice, and lively dance moves. He later formed his own band and often performed with Chuck Brown. One of the first inductees into Go-Go’s Hall of Fame in 2008, he passed away in his sleep in 2010 at age 46. 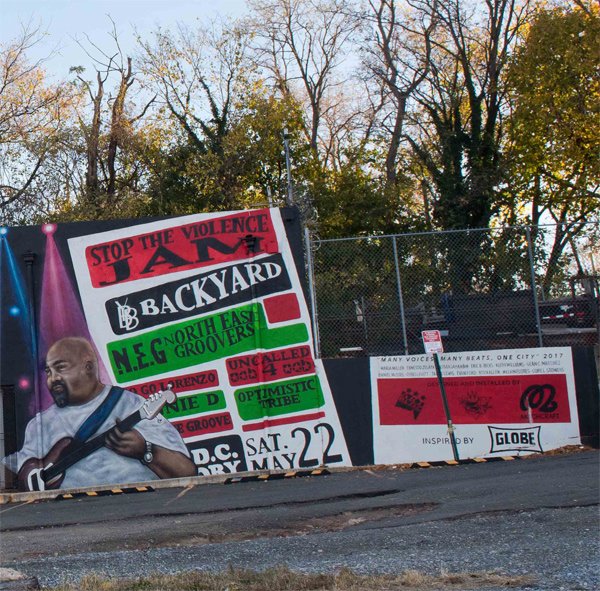 Third from left is Byron “BJ” Jackson, a revered figure in the pantheon of gifted musicians that lighted up DC through the ‘80s and ‘90s. Hailing from Maryland, he was the first keyboard artist with Rare Essence throughout most of his 30-year career. Jackson was also a gifted and prolific musician who wrote, scored and produced songs in all genres. He died of cancer last year at 52. As news of his passing spread, public and private memorials filled the city. Delia Goncalves on local CBS affiliate Channel 9 perhaps summed it up best: “If Go-Go is the heartbeat of DC, BJ was the bloodline that pumped through.”

Jumping to the end of the row, Stowers reprises a Go-Go institution that originated in Barry Farm, just blocks from the mural. Children from the public housing project wanted to emulate the established Go-Go bands that played in SE, but lacked the money to purchase the necessary equipment–keyboard, horn, guitars, and various types of percussion instruments. In an astounding burst of creativity, the young upstarts found commonplace—and free—objects that conveyed the “feel,” if not all the sounds, of a fully equipped band. Dubbed the Junk Yard Band, the group relied on hubcaps, plastic buckets, and discarded pots and pans to create a percussion backdrop, with vocal performers substituting for the missing instruments.

Big House (Derek Colquitt), pictured far right, grew up in Maryland listening to Go-Go and playing the trumpet. Nearly 20 years after Junkyard started to make the local scene, he joined the band—which had since acquired enough backing to afford instruments and performed at Kennedy Center, among other storied venues. With Junk Yard he played bass and managed the band until his death in a motorcycle accident in 2015.

To his right is Heavy One (Willie Irving Gaston, Jr.), one of the original members of Junk Yard; his drumsticks helped propel the band to fame on the Go-Go circuit. Heavy One deplored the violence in the neighborhood and routinely intervened to diffuse disputes. Ironically, the young musician was killed in crossfire during a gunfight near his home in Barry Farm.

Taking center stage, of course, is Chuck Brown, the legendary “Godfather” of Go-Go who blended elements of funk with R&B and gospel music to create a new sound unique to DC. The defining elements are a syncopated beat and a complex mixture of several percussive instruments with horn, keyboard, and voice, including rap and a DJ. Unlike funk and hip-hop, which developed as dance bands in New York, Go-Go blended one song into the next, keeping dancers on the floor for hours. Brown said the new style got its name because the music “just goes and goes.” While Brown’s band performed all over the city, he was a fixture in Anacostia. 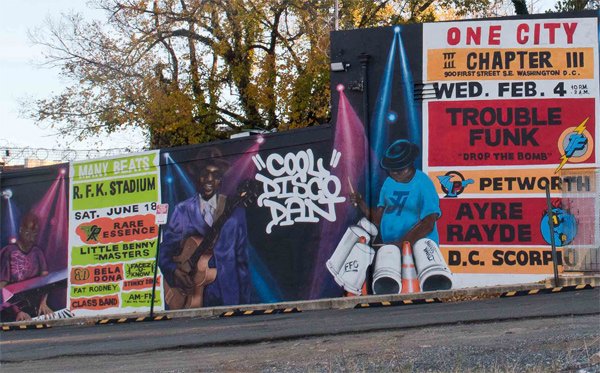 In 1966 he formed his own band, The Soul Searchers. Fluent on the guitar, his voice performance came to define his style, featuring a “call and response” form derived from gospel music. The riff created a bond with the audience and contributed to his success. In 1976, Brown shot to fame with his hit single, “Bustin’ Loose,” which stayed atop the R&B singles chart for weeks. Brown is shown holding his guitar at a formal event, a pose capturing his dignity and spirit.

Portrayed on the wall directly to Brown’s left is a name that virtually everyone will recognize—“Cool” Disco Dan—his ‘mark’ that is—which decorated the town during Go-Go’s heyday. “Dan Hogg (Disco Dan) loved Go-Go and was part of the culture,” explained Stowers. “Both phenomena were pushing the boundaries of conventional self-expression. Disco Dan’s presence on the wall is also a part of the homage to our passing cultural icons that the mural intends to evoke.”  Dan died in July, just three days before the mural was completed.

The faux posters that separate and tower over the musicians are central to both the power and theme of the mural. The brilliantly colored plaques are created in the style and colors of the actual posters that promoted Go-Go at its peak, although the content is a mix of various bands, performers, and shows associated with Anacostia.  Montu Mitchel, who shares credit for the mural’s design with Stowers, created the posters based on the playbills produced by Globe Press, now housed at the MICA (Maryland Institute College of Art) in Baltimore.

The dramatic posters beckon to folks blocks away, inviting them to look more closely. Many immediately recognize the figures and signs on the wall. Additionally, the scale of the posters takes the viewer beyond the neighborhood, pointing to the universality of the nonviolence theme implicit in the work. The inclusion of Chuck Brown, who brought the city together under one banner of unity and uplift, speaks to the title of the mural, Many Voices, Many Beats, One City.

The work has been enthusiastically received by fans from all parts of the city, and was profiled on CNN, Voice of America, and local CBS affiliate WUSA Channel 9.  Andrew Cho, owner of the Red Store, recently said of his reservations about the new wall, “I couldn’t have been more mistaken. People absolutely LOVE the new mural.”

If you haven’t already, check out the DC Murals website at www.dcmurals.info. Your donation supports the public mural tours, public programs, and exhibitions that are enriching DC’s cultural life. DC Murals is planning an exciting mix of programs for 2018 and appreciates your tax-deductible support.