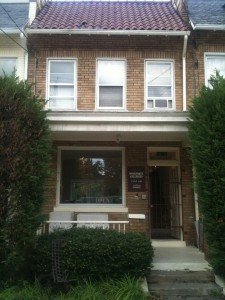 Fine art abounds in unexpected quarters all over the District.  Take for instance a quiet side street steps from the Brookland metro station.  Step off the train, cross Monroe Avenue and a moment later you’re deep in a heaping visual dose of American Impressionism, brought to you courtesy of the Wohlfarth Galleries.  I’ve long admired the serene landscapes through the window, but never seemed to find it open when I’d walk by.  My curiosity piqued, I called up gallery director Lavinia Wohlfarth for a tour of her space.

Not only is Ms. Wohlfarth a fifth generation Washingtonian, she’s also a native Brooklandian, residing in her childhood home just a few blocks from the gallery.  Known as Vinnie to her friends (which seems to include everyone that walks through the front door during this interview), Wohlfarth entered the art world obliquely after a successful career in the restaurant business.  Realizing she needed a change, she sold her restaurant and in 1987 took a sabbatical that landed her in the thriving arts community of Provincetown, Massachusetts.  Provincetown is both the home of the Cape Cod School of Art and a cultural nexus for the uniquely American style of Impressionism the School continues to champion.  Noting the simple beauty of their plein air style, Wohlfarth states, “they were like a tonic for me,” and she found herself returning the following summer with a business plan forming in her mind.  Her initial plan focused not only on current students but also of seminal figures of the movement, including Henry Hensche, landscape painter and influential instructor at the School. 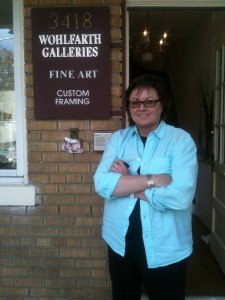 She returned to Brookland and opened her gallery in a row house near the Catholic University campus.  Her reach expanded with the opening of a seasonal gallery in Provincetown in the early 1990s and the subsequent expansion of the District space not long after that.

Walking into the gallery space feels like being welcomed into your tasteful neighbor’s house (think The Phillips Collection’s original mansion on a much less grandiose scale).  In her original building, Wohlfarth left the interior walls intact, and the size and scale of the rooms lend a feeling of intimacy that plays off the simplicity of the artworks.   The artwork continues up the stairwell, and the multiple bedrooms encourage people to personally engage with the art in a way not usually experienced in a more modern gallery setting.  A large deck in back joins the two buildings (they have separate front doors facing the street), and the new building, with its open floor plan has a more modern feel.   Wohlfarth uses this space to showcase art benefiting from a more contemporary feel (think large-scale, perhaps experimental works requiring floor space) and graciously lends it out to community organizations as for meeting space.  On the day of my visit, the gallery was featuring a solo show of landscapes by local painter Lisa Farrell as well as works by Cheryl Edwards and Ellyn Weiss.

Almost 25 years on, Wohlfarth’s longevity seemingly defies the District’s turnover of art galleries.  It’s not easy to deal fine art in this town, to which a long line of shuttered galleries attest.  Candidly, given her seemingly out-of-the way location and apparent lack of year-round, storefront hours (no hours are listed on the website or posted on the front door, though I’ve learned that should change this fall), I was curious as to how she managed to stay in business all these years.  Wohlfarth is forthright in her business acumen (speaking candidly with me about the success of the artists for whom she deals) yet also surprisingly relaxed – almost casual – in her approach to the sales of art.  “Fine art galleries are not shops,” she tells me, and therein I begin to understand the subtle differences between the labels “dealer” and “gallerist”.

Vinnie (we’re on a first name basis by this point) explains that one of her keys to success has been to collect and show art in which she’s passionate — American Impressionism in this case — and subsequently share that passion with her clientele, some of whom have been with her now for over two decades.  As a dealer, her business is not solely defined by her exhibition calendar, but by maintaining and nurturing those longstanding relationships.  When she meets an artist whom she sees potential in, she encourages them to leave a selection of art in the gallery and focus on their vision.  “Forget these pieces… Go paint some more,” she advises.  It may take a year or two, but she knows eventually she’ll find the right buyer(s) for the work.  She may even add one or two to her permanent collection, which then may find new owner years later.  When a new customer walks in the door, she isn’t interested in making an immediate sale, but would rather the customer engage with the works to see if something pulls them in.  It feels slightly counter-intuitive to me, but her belief in the power of quality art to sell itself has kept in her business thriving in good years and bad.

That belief in the power of art informs her volunteer pursuits as well.  Along with maintaining close ties to a variety of neighborhood organizations, Wohlfarth is the Ward Five Commissioner and Vice-Chair of the D.C. Commission on the Arts and Humanities.  During her time as a commissioner, she has seen three different mayors take office, a testament to her parliamentarian skills (commissioners serve at the pleasure of the mayor and are typically replaced by succeeding administrations).  While the DCCAH is probably most thought of as grant-giving institution, it plays a key role in bringing quality art to all parts of the city through temporary projects like last spring’s successful 5×5 project (which she confirms is happening again – you read it here first!) and more permanent initiatives like working with developers to include public art pieces within their construction.  It is time-consuming and unpaid, but Wohlfarth is heartened by the cultural renaissance our city is experiencing and firmly believes that art plays a key role in moving that spirit forward.

As we say our goodbyes on the front stoop, I ask her how she keeps up the pace of two galleries plus volunteer pursuits.  She laughs and says it has certainly had its ups and downs, but she wouldn’t change her career for the world. And then she pauses. “I could have spent the rest of my life making money [at the restaurant],” she says reflectively, “but then I’d be missing out on the simplicity that art brings to [my] life.”  We should all be so lucky to have a job we love.

The Wohlfarth Gallery is located at 3418 9th St, NE in the Brookland Neighborhood (with a second location in Provincetown, MA).  For more information, visit the gallery’s website here