What is your process?
It depends on the series I’m working on and whether I’m doing painting or the occasional 3D piece. But it’s always very much based in a materiality approach. My first serious medium was pastel, and I’m still enchanted by the physicality of it, that you’re basically just grasping the pigment and applying it directly to your surface. I work intuitively, without preliminary sketches, guided by what type of piece I’ve set out to do, whether it’s an all-over-type, thickly textured piece or something flatter. Most of the pieces in this show are built on a resist technique using powdered graphite and acrylic gloss medium. I do a gestural drawing with the medium, then sprinkle the graphite on and work it with a palette knife. The graphite-acrylic combination has become a mainstay of my practice over the last couple of years.

When did you first begin making art?
I started making visual art when I was 50, ten years ago, but I’ve been involved in the arts since I was a kid. I played music from grade school through college, where I also was in an improv dance company for a couple of years. I was in the DC downtown arts scene in the 80s and early 90s as part of an active Black LGBT arts scene that had national prominence, doing spoken word and music with the poet Essex Hemphill. I’d always done drawings at rare intervals, and I started doing some collage-oriented stuff around 2006, getting material from craft stores. The first fine art medium I bought was oil pastels in around 2007, then soft pastels 2008 to 2011 or so, and my practice has gradually expanded since then.

Have you shifted the direction of your work and if so, why?
The work in this show probably represents the biggest shift in my work, from “pure” abstraction to a more figurative approach. I would describe it as more of a drift than a shift; it grew naturally out of the less objective pieces I’d been making. I’ve tended to use a strong horizon line, with a large mass centered in the upper part of the picture plane. Over time, the line curved to suggest shoulders, and the central mass morphed into a head-like shape. It’s hard to say why this happened; that’s a challenging question. I don’t think there was real intent on my part. Even when I did a few more realistic heads/faces, it still was driven by the material as much as any pictorial impulse.

What draws you to one particular medium over another?
I’m drawn to painting in part because of the potential for thickness of the pigment layers, as opposed to the flatness of photography or printmaking. Just that aspect gives painting a vast formal potential; it can be so many things. The physicality of it is really seductive. I love working on paper, for the directness and tactile quality of it. When I stretch canvas, I’m really intrigued by the idea that I’m creating this arena where the action of painting takes place. Since I work flat rather than on easel, it just accentuates that feeling. There’s something inviting about the blank surface, like it’s looking up at me expectantly.

What do you hope a viewer would take away from your work?
A feeling of presence and contained energy. An idea or feeling suggested by the title. I try not to think too far beyond that. I don’t want to be too prescriptive.

Discuss your color palette—how does it inform your work?
I work predominantly in black and white/grayscale, with occasional forays into color. It’s something that gradually developed after I got my studio. I grew up on black and white TV and movies, so I think there’s a memory aspect to it. I just find the composition of an image to be so much clearer in B/W. I don’t really like having too many choices, so having that color palette limitation is actually liberating for me. 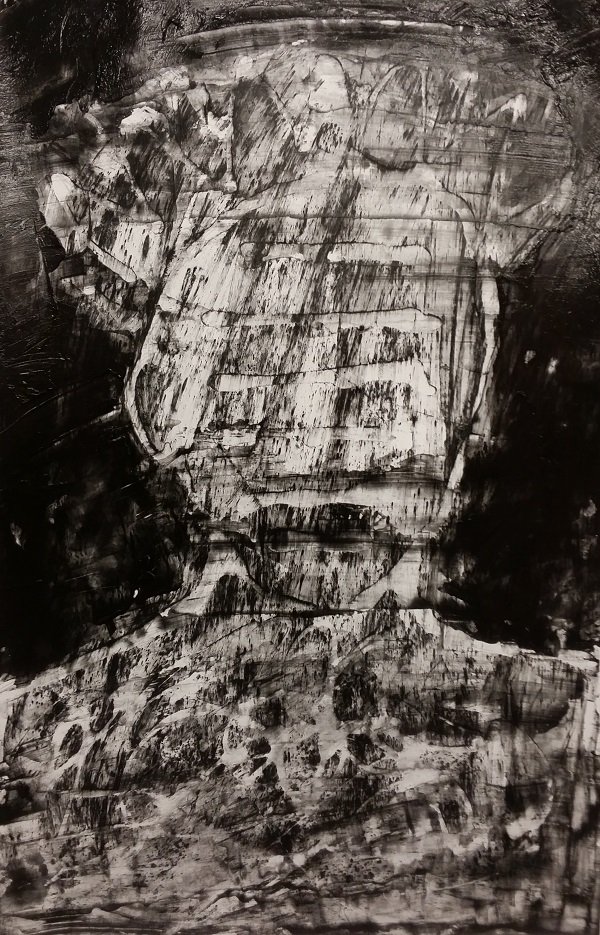 What do you believe is value of painting in the 21st Century?
I think it’s fundamentally the same as it’s always been. I don’t subscribe to the whole “painting is dead” idea, which I think is sadly still around, despite what I see as a renaissance of painting. I think there’s a real desire for things done with the hand, and something primal about mark-making and representation that resonates deeply with people. I don’t think it will ever really get old; it’s so foundational to what is thought of as fine art.

The Fisher Art Gallery is on the second level of Schlesinger Center, which is located at 4915 E Campus Drive, Alexandria, VA. For more information about art shows and concert hall events, call the Schlesinger Center at 703.845.6156.