Steven Pearson posing in front of “Amalgamation”. Photo Courtesy of the artist.

Originally published on October 17, 2011, Eric Hope Interviewed Pearson on the eve of an exhibition at Studio H on H Street NE.  Steven Pearson will be showing work at the (e)merge art fair October 4 – October 7, 2012 at the Capitol Skyline Hotel at Honfleur Gallery’s booth in room 225.

More information about (e)merge can be found by clicking here. 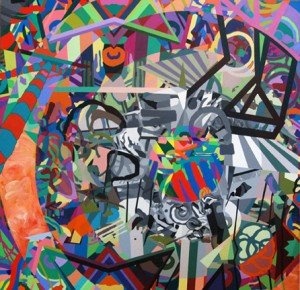 If you’ve taken a flight out of BWI airport lately, you may have been mesmerized by a monumental, 25 foot-long riot of color, shape and kaleidoscopic forms hanging in the airport.  The creator, Steve Pearson will be featured in a solo show at the end of this month at Studio H gallery on H Street, NE.  I recently had the chance to catch up with him to discuss his work and musings on how abstraction can be used as a codifier for everyday life.

At first glance, Pearson’s oeuvre seemingly follows the tradition of Abstraction whose groundwork was laid in the middle of the last century.  However its important to note he eschews the label of “abstract artist”.  Rather, he views himself as artist first, then a painter who happens to use nonrepresentational techniques as the most appropriate visual language to express his point of view.  At first I thought this was just semantics, but as we delved deeper into conversation about the history of Abstraction, I began to have a better understanding of his point of view.  He noted that Abstraction’s seminal artist, Jackson Pollack established traditional Abstraction as a reflection of the natural world devoid of extraneous details.  Pearson (and other artists of his generation) take almost an opposite tack, using nonrepresentational forms to examine our frenetic, media-saturated existence.

For Pearson, abstraction has long been a  tool of choice for examining how we ingest and make sense of the daily deluge of information and sensations that bombard us visually, orally and (more recently) electronically.  With this understanding, shapes, lines and colors become stand-ins for thoughts and ideas which we must wade through, evaluate and choose to validate or discard.  In addition, grids and grid systems play a vital role in the composition of each piece, even if they aren’t always evident.  Person believes this harkens back to his military service in the U.S. Navy, where “order in chaos” was the name of the day.

The particular codes and shapes he uses may not be easily intuited by the causal viewer, but the color palette certainly draws us in.  With whiffs of nostalgia , Pearson uses colors inspired in part by comic books of 1970s and ’80s, when things felt more “black and white” as it were.  There is a sentimentality — almost longing — here for less complexion in life.  Alas, that is not to be the case.  I also noted that as his work continues to mature it moves away from biomorphic to dense, linear shapes.  When I asked him if that level of density somehow relates to the explosion of electronic/social media, he noted that his newer work does coincide with the arrival of his blackberry and facebook page (and a newborn infant to boot!).  While he doesn’t draw a direct correlation between the two, he does note that as life gets more complex, so does his art.

Sizing and scaling of the pieces are also important to Pearson.  I found it interesting that the same artist simultaneously paints mural-sided pieces along side works that fit in an 8×11 inch frame.  His approach 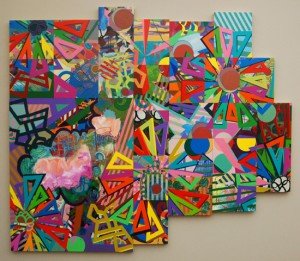 to scale changes with each piece.  Sometimes what reads as one giant mural actually begins life as a number of smaller panels that are “stitched” together to provide an overall cohesiveness.  Other times, he prefers to work on small pieces of paper, which forces himself to shape his grids to fit in a predetermined scale.  Working on several pieces at once in the studio forces him to be more disciplined in resolving compositional issues.

His latest work that will be featured at Studio H is so complex and vibrant, it almost rifts on graffiti.  I was at first hesitant to bring this up;  though “street art” is gaining credence in the larger art world, not every artist would appreciate the connection.  In this context though, the density and liveliness of his work surely rifts on the vibrancy of modern graffiti, and while he isn’t trying to mimic it, he readily admits to liking and appreciating this new, emerging art form, and notes that his layering and discarding of visual ideas is akin to the layering of one tag upon another.  He summed it up nicely this way:  “Some things are worth remembering, some things are better wiped away.”