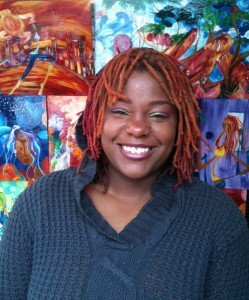 In this installment of East City Studios, our occasional series of forays into the private realms of Eastern DC and Gateway artists, I had the pleasure of sitting down with mixed-media artist Quest Skinner.  Normally our visits take place in the studio, but Quest is a hard artist to pin down.  She maintains a studio in the Brookland Artspace Lofts, but is constantly on the move taking her art directly to the public.  I managed to track her down at the downtown DC holiday market where she was setting up a booth of her wares.

I spot Quest’s booth a half-block away; the psychedelic “Quest-mobile” is a dead giveaway.  Scores of paintings and mixed-media pieces are scattered around the booth, waiting to be hung. I secretly wonder how she’ll manage to get everything up in time, but she mills about the space with consummate ease. 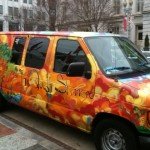 Quest  creates art full-time and is no stranger to street fairs.  In fact she prefers this type of arrangement over the traditional gallery system because it gives her total autonomy as well as a direct connection to her patrons.  She’s developed a growing fold of fans over the years and prices her work comfortably to sell.  She’s even been known to give first time-buyers a special discount!

We start with a bit of background.  Born in Pittsburg, Quest is a third generation, self-taught artist who moved to the District in 1998.  She has been painting since she was 18, finding inspiration during her travels with the musical group Up With People.  Without words to describe what she was seeing, she turned to the art for “other ways of explaining” herself.

And what a visual uproar she creates!  Her artwork, which doesn’t cleave to any specific art movement or “ism”, is a bursting riot of color.  Her work is straightforward, often hinging on a palette of seemingly tropical colors that look to the sunny side of life.  Voluptuous, feminine forms are a reoccurring motif,  the “girly aspect” of which, “exude[s] what we are as women.”  There is also a certain sensuality in the poses of the figures that  suggests both fecundity and a close link to the natural world.  Just don’t dwell too deeply in the metaphors; she’s too busy living life to be bothered with such didactic analysis.

There is a sense of light, unadulterated pleasure — of freedom — in her work that we don’t often see in works hung in galleries.  That got us to talking about some of the upsides to being self-taught.  Aside from no student loans, Quest sees value in being free of artistic restraints and the insular environment that can exist in a scholastic setting.  Rather than try to reinterpret or reinvent prior artistic structures or processes, she’s free to express what she (or a patron) finds valuable in life.  I asked her if she has ever been disappointed with the way a piece has turned out.  She stated that no piece is ever a failure — it merely needs reworking!

As the fair opened and the public began to saunter in, we said our goodbyes.  As it happens, this particular fair is set up right outside the National Portrait Gallery, which is also her favorite museum.  She looks forward to the day when her work, “shine’s so brightly they have to let [me] in.”  Its always good to have goals!