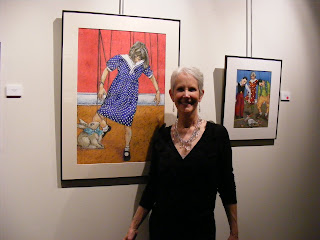 Ellen Cornett’s pastels are filled with playful reinterpretation of fables and fairytales where her subject matter is people she knows- friends- in costume with unexpected props that relate stories of improbability. Pinocchio, for example, grows up to become a dance instructor. She uses realistic drawings and combinations that create mystery, placing random things together with and without a purpose: “the underlying theme can be communicated without it being overly realistic,” allowing space for viewers to create their own stories. The story is with the whole rather than the disparate pieces would suggest individually.

She enjoys mixing the real and unreal, of people and puppets. As a young girl, she received a marionette as a gift from her mother. Puppets—people on strings—have become a recurring theme throughout her works. She takes the strings off of puppets and puts them on people, inspiring her audience to interpret in many ways: “Who is pulling the strings? I am trying to describe my place in the world where the center is a relationship of my choices and my friends. ”
Her creative evolution tells a story of its own. Cornett always knew she wanted to be an artist, but she initially thought it wasn’t a serious enough profession and began college majoring in Political Science. “I was miserable.” Cornett decided to follow her truer ambitions and turned her studies to art. Having established a successful graphic design and illustration career, it wasn’t until 10 years ago that she began to promote her own art. Five years ago she made a year-long commitment: 365 days to create 365 pieces. Working very hard, she ended up with 380 pieces and was happier and had more energy. “It was this year of working furiously- coming to feel that the way out was also the way forward- to follow- to track down and see what happened. This was the direction in which it led.” Just after that year ended, she took a workshop with Wolf Khan, well-known for his colorful realistic pastel work, and saw Paula Rego’s pastel work at the National Museum of Women in the Arts. The combination of these events inspired her to explore this medium and kind of playful art.
She confesses that the big change was to learning trust herself, giving herself permission to explore and the freedom to act and create. She told herself, “if I hate it, I can always throw it away later,” finding her success rate higher. A lesson learned and a metaphor for life.