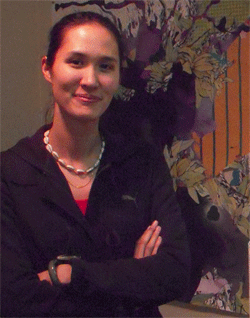 Perched three stories above H Street NE, Katherine Mann’s studio looks south toward the Capitol Hill skyline affording unobstructed views of the Capitol, the Library of Congress’s Jefferson building and of course, the myriad of row houses and trees that line the historic district.
A recent 2009 MFA graduate of MICA’s prestigious Hoffberger School of Painting in Baltimore, Mann found herself confronted with the reality that her academic career, which had taken so much of her time and energy, was now coming to a rapid and abrupt end.  “I found myself having to go back to the ‘real world’ and teach” Mann laments.  She had devoted herself to her final project “Filigree” a 30 foot painting which is currently on display at BWI Airport.
However, she adapted rapidly to the post-graduate world.  She was accepted as a fellow by Hamiltonian Gallery and spent the summer at the Virgina Center for the Creative Arts in Amherst, VA.  By the fall she had found herself a studio on H Street allowing her to focus once more on painting. She even found the time to fly down to Miami for the Miami-Basel show where she sold one of her larger pieces.  “I was very inspired and energized by what I saw in Miami” says Mann.  Then, in mid-December 2009, she and two of her fellow Hoffberger graduates, Jennifer Mullins and Kim Manfredi exhibited at a group show at Studio H entitled “Wonderment, an Exploration of the Indeterminate”.
In January 2010, along with her fellow graduate and good friend Kim Manfredi, Mann spent several weeks at the Vermont Studio Center.  “This was a turning point for me” says Mann.  In Vermont, she was able to work side by side with 50 other artists, share three “great meals” a day with them and take her work in a new direction.  “My work became darker and I began to create night scenes or nightscapes” Mann recalls.
At the Vermont Studio Center, Mann also had the opportunity to meet fellow Hamiltonian Christian Benefiel, a sculptor who will be exhibiting alongside Mann and Michael Sirvet at Hamiltonian Gallery this Saturday.   The three person show will focus on ambiguous forms.  The artists combine and add small characters to  create a whole.
Mann’s work begins by staining and pouring ink on paper.  She then builds up the work with characters, paterns and botanical elements.  “While the staining and pouring of ink are spontaneous, the overlapping elements define yet suffocate the ink” states Mann.  The binary quality of Mann’s work both during the process of creation and the end result derives from the play between seemingly conflicting dichotomies- organic vs inorganic, structure vs loose and, control  (characters) vs spontaneity (free flowing ink).  Even the viewer becomes an actor in the play between opposites- up close one can admire the detail of the characters and from far away the forms of the work are still legible and form a whole.
Katherine’s work will be on display at the Hamiltonian Gallery from March 27 – May 1, 2010 Opening reception: Saturday, March 27, 2010, 7 – 9 p.m 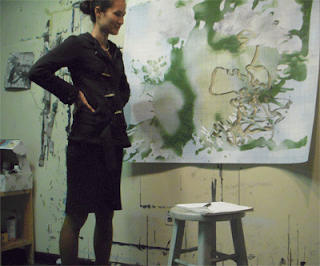