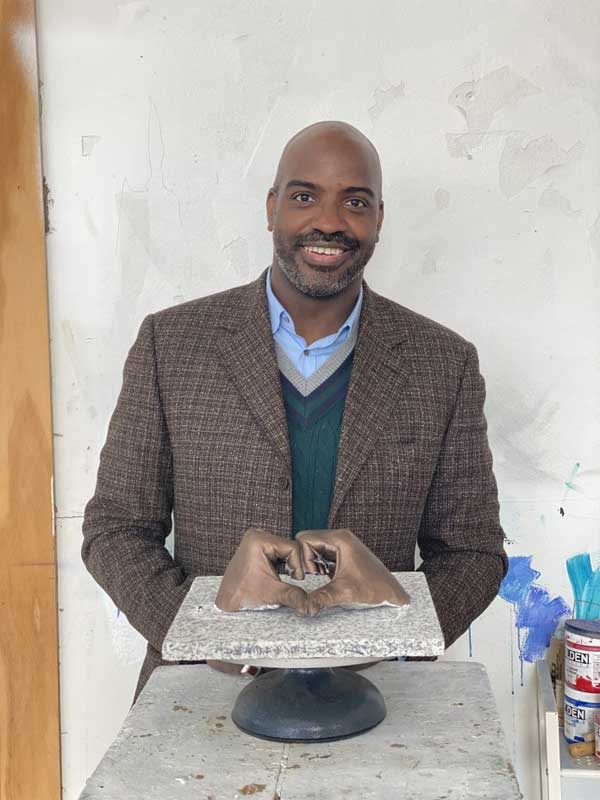 Most of us have seen Jay Coleman’s work around DC probably without even knowing it.  From the bronze casts along DC’s Walk of Fame at the Howard Theater to his large-scale mural of Marion Barry in Historic Anacostia overlooking I-295, Coleman has left his mark all over town. The former DCPS educator and full-time artist has lived east of the river his entire life—well, almost.

Coleman took his first breath in the Allegheny Mountains of Pennsylvania, just outside of Pittsburgh, in a small steel town called New Kensington. Coleman’s out-of-state birth had been planned all along. His mother sought the medical services of New Kensington’s town physician, who also happened to be her father. 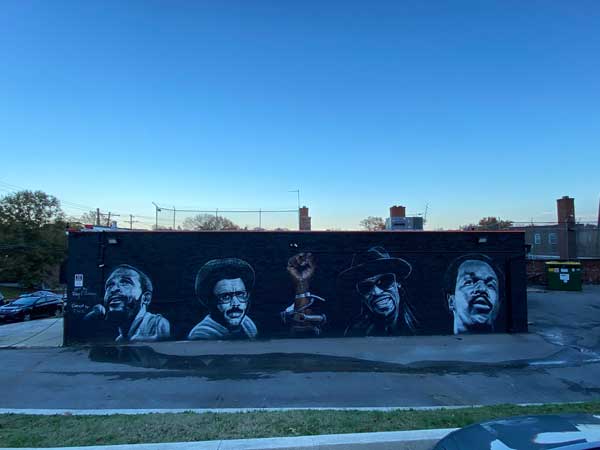 But Coleman, who, briefly played goalie for the Fort Dupont youth ice hockey league, is no Pittsburgh Penguins fan! He is a DC native through and through. “I represent DC and wear it on my chest! The majority of my work is here and it gives me a lot of joy to give back to this city,” he says.

Coleman lives in Eastland Gardens. A graduate of the Corcoran School of Art, Coleman is focused mostly on two-dimensional work. A prolific artist grounded in representing the human figure, Coleman’s work is sought after by public art commissions and collectors alike.

Coleman’s studios are located in Brentwood, Maryland just over the DC line in the Gateway arts district in an old mid-century warehouse that backs to CSX’s commercial rail line. It is here where Coleman began his explorations into sculpture, working closely with the late sculptor Joanna Campbell Blake. Blake worked on a number of monuments around the country including the World War II Memorial and “Undaunted in Battle” which commemorates the War of 1812 at the intersections of Route 1 and Route 202 in Bladensburg, Md. 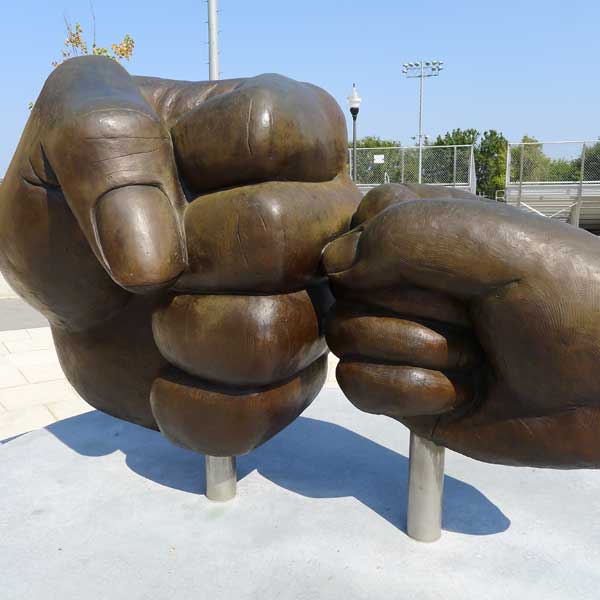 Anchored in concrete and centered prominently in the outdoor courtyard of Barry Farm’s rec center, “Communessity” depicts the “fist bump,” popularized by President Obama. Coleman found inspiration in the African proverb “The youth can walk faster but the elders know the way.”

Seeking to inform the community of the importance inter-generational understanding, sympathy and cooperation, “Communessity” depicts two fists, one of a child and one of an adult, in motion, bumping, indicating a partnership between young and old. For Coleman, the bumping also represents the transition from youth to old age and ultimately, humanity’s longevity.

Just last month, Coleman was awarded a commission for a large sculpture that will prominently occupy the public plaza at Eastern Market Metro. Titled “Loveful Hands,” the work depicts two hands that create a heart shape. Coleman explains, “I thought about the times that were in. We need to see something that we relate to. We need to have a conversation about unconditional love.”

Both “Communessity” and “Loveful Hands” use fists and fingers to create manual gestures as expressions of unity and love. In describing the use of hands in these works, Coleman says, “Hands are just as expressive as eyes. With hands there is no ethnicity. When another human sees another human being there is a cognitive response that is familiar.”

While Coleman is enjoying his success as a sculptor, he continues to produce murals. DC Department of Government Services (DGS) has commissioned Coleman to create a series of works in elementary schools east of the river. Coleman’s experience and passion as a pedagogue resonates in this series.

For example, in his mural at Houston Elementary School, prominently centered in the painting, a quote from the school’s namesake, Charles Hamilton Houston, reads: “Without Education, there is no hope for our people and without hope, our future is lost.”

In November, Coleman completed a mural on a commercial building at the behest of the owner who sponsored the work. Located on Elmira Street SW just off South Capitol Street, the mural takes up the entire length and height of the sprawling building.  Still not titled as of this article, the mural exemplifies Coleman’s mastery of portraiture.

Set on a black background, Coleman rendered four of DC’s beloved figures–Marvin Gaye, Petey Greene, Chuck Brown and a younger Marion Barry. Painted in white, the four ghostly figures seemingly emerge from the wall. The only element Coleman painted in full color is a fist, undeterred by shackles and wire ties, rising defiantly from the middle of the mural.

It should be noted that Coleman can just as easily scale his work to fit gallery walls. This summer, a dual exhibition at Honfleur Gallery curated by Duane Gautier alongside painter Eglon Daley titled “Convergence” served as a sort of retrospective of Coleman’s paintings. It included multi-generational themes, an acknowledgement of the African Diaspora and hope for the future seen through the city’s youth.