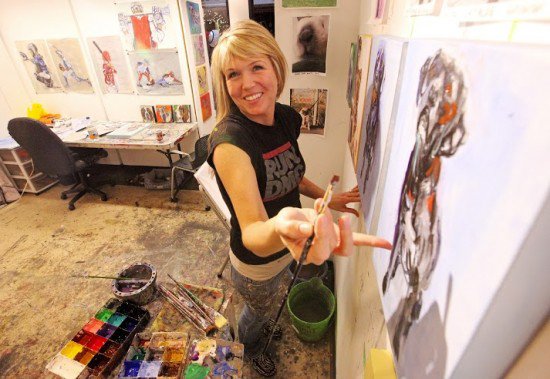 Mary Gallagher Stout leaves an impression with her email sign-off  “Rainbows and lollipops.” And in-person, she smiles—a lot. She’s energetic and a consummate talker, telling stories, laughing, poking fun at her own eccentricities, talking through her current art projects. She’s a woman you don’t forget.

She’s a typical expressionistic artist. Her process and her materials are never haphazardly chosen but a part of the artistic message. Yet her vibrant optimism seems antithetical for a philosophy student turned visual artist.

Gallagher Stout is the first to admit her positive outlook is an act. If not an act, a conscious decision.

“Right now everything is so doom and gloom. I don’t want to add any more depressing stuff so I’m trying to be light. In my work, I am trying to focus on the silver lining, the beauty and the happiness of life with color and strong bodies. But there is a lot of dark I want to explore…..there is a lot I want to do with art: with women’s issues, with abuse, with suicide….But for now, I’m Tigger.”

A rocky childhood, a son of her own at 16, an abusive relationship, single motherhood, and scraping by to fund a philosophy degree, MGS appreciates that no one escapes life unscathed. After years on her own, she married and gave birth to her daughter and fell into a severe post-partum depression and mild agoraphobia. Desperate to shake her depression, she picked up a brush and paint and transformed the walls in her house into colorful murals. Visitors loved what they saw and soon, MGS found herself working as a decorative artist in other people’s homes.

“After a while, I wanted to do something more important than paint people’s homes so I juried into the Workhouse Art Center and I gave myself three years to figure out my voice. I made a lot of crap. I did a lot of soul searching.”

She dumpster-dove for kitchen cabinets for her first show at the Workhouse. Resurfacing used the concept of kitchen cabinets hiding categorized objects behind doors. From here Mary utilized the cabinets to show the compartments of her brain. “I was really proud of it because it was terrifying and ugly but I didn’t care. I was like fuck you, I don’t care. I’m doing what I want to do. I’m making a mess and some of it works and some of it doesn’t. That’s when it really became about the materials.”

Three solo shows, two books, and many exhibits later, 2016 has led MGS to experimenting with a muted palette and thinking more about brushwork. She’s focused on which fresh direction her painting is leading her. As in life, she knows art doesn’t have to be pretty all the time. “Just be honest with yourself,” she says, “For me, art makes life better and bearable.” 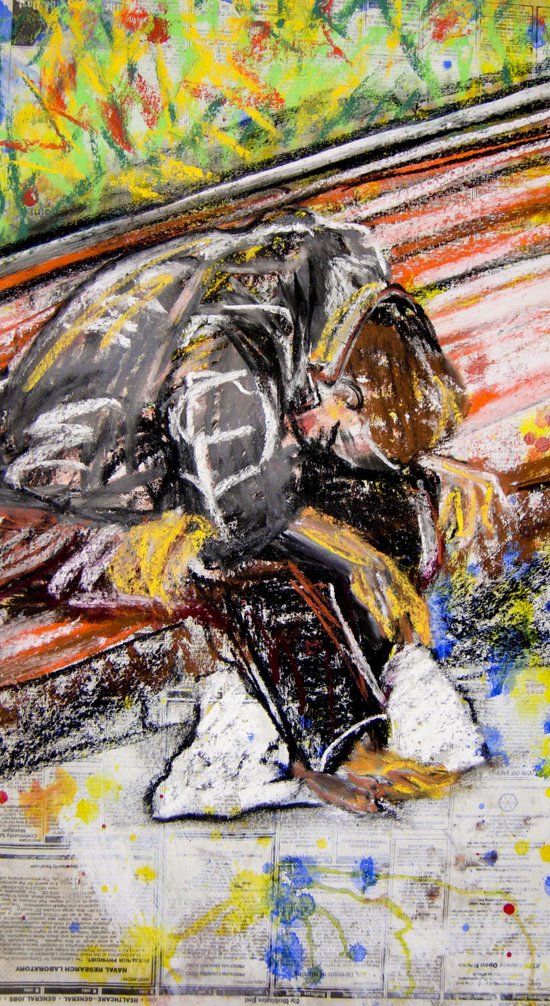 How do you deal with harsh criticism? Have you ever had a surprising comment? Where?

Criticism goes along with the territory, but no criticism is harsher than my own. I keep a flog handy when appraising my work. A surprising comment? Well that came from a college professor who remarked, “You have an innate sense of color.” I was flattered, flabbergasted, and still consider what that actually means.

Do you have any rituals?

I wouldn’t call it a ritual, but I do like to run on my treadmill every other day. I blast the music and stare into the artworks my kiddos created when they were little. I adore the freedom and “bad-ass-ery” of their line quality. It’s so confident and carefree. It inspires my imagination and my mind wonders through the picture plane. I also enjoy a daily glass of wine at the end of the day

What are you thinking about in the studio?

That depends on what I’m working on. I create works in a series. It’s important to flesh out an idea completely. I’m very interested in exploring the human figure in motion and in repose with gestural lines and loads of color. I’ve been playing with figures with a limited palette, but I think it’s time to amp things up a bit.

How do you know when you’re done?

This was a very difficult question as I have way more than three favs! After serious reflection, I’m going with Theodor Geisel aka Dr. Seuss, Claes Oldenburg, and Marcel Duchamp

Your greatest success and worst failure?

I’m still working toward my greatest professional success, but I was really proud to have my painting titled, Forward Thinking, invited into the Virginia Museum of Contemporary Art, New Waves 2016 Exhibition, which ran through April 17, 2016.

I’ve learned more from my failures than any of my successes. I’m a coconut head that unfortunately seems to have to learn everything the hard way. Truthfully, I don’t believe I’ve ever had a worst failure. You see, for me a failure doesn’t get back up. I ALWAYS get back in the ring.

Have you ever regretted selling a piece and why?

Nope. The act of creating is why I paint. Much like when you’ve completed a puzzle, the piece is finished I no longer have a need for it. That is why I sign every painting with a xo under my name. It’s me kissing and hugging it goodbye.