Open Studio DC resides in an industrial space on the second floor of 1135 Okie Street NE, one block from New York Avenue.  The studio is half a block from the ever changing murals on the Fairview Avenue Open Wall.  The studio, located above the 18 Distillery, is home to master screen printer Carolyn Hartmann, Adjunct Professor at George Washington University’s Corcoran College of Art and Design, Artists in Residence JD Deardoff and Hope Sorenson, and The Sanctuaries, a collective of “Soulful Arts for Social Change.”

Her second floor studio is a vast open space with concrete floors, large common areas and equipment, and moving walls that slide out for gallery shows.  One wall is lined with several private artist’s studios, rented on a monthly basis.  She provide open studio space, time, and equipment for screen printers.

She demonstrated the photo-emulsion printing process during my visit—transferring a design to films, coating the screen with photo emulsion, exposing and developing the screen, and printing–a detailed process she accomplished with ease. 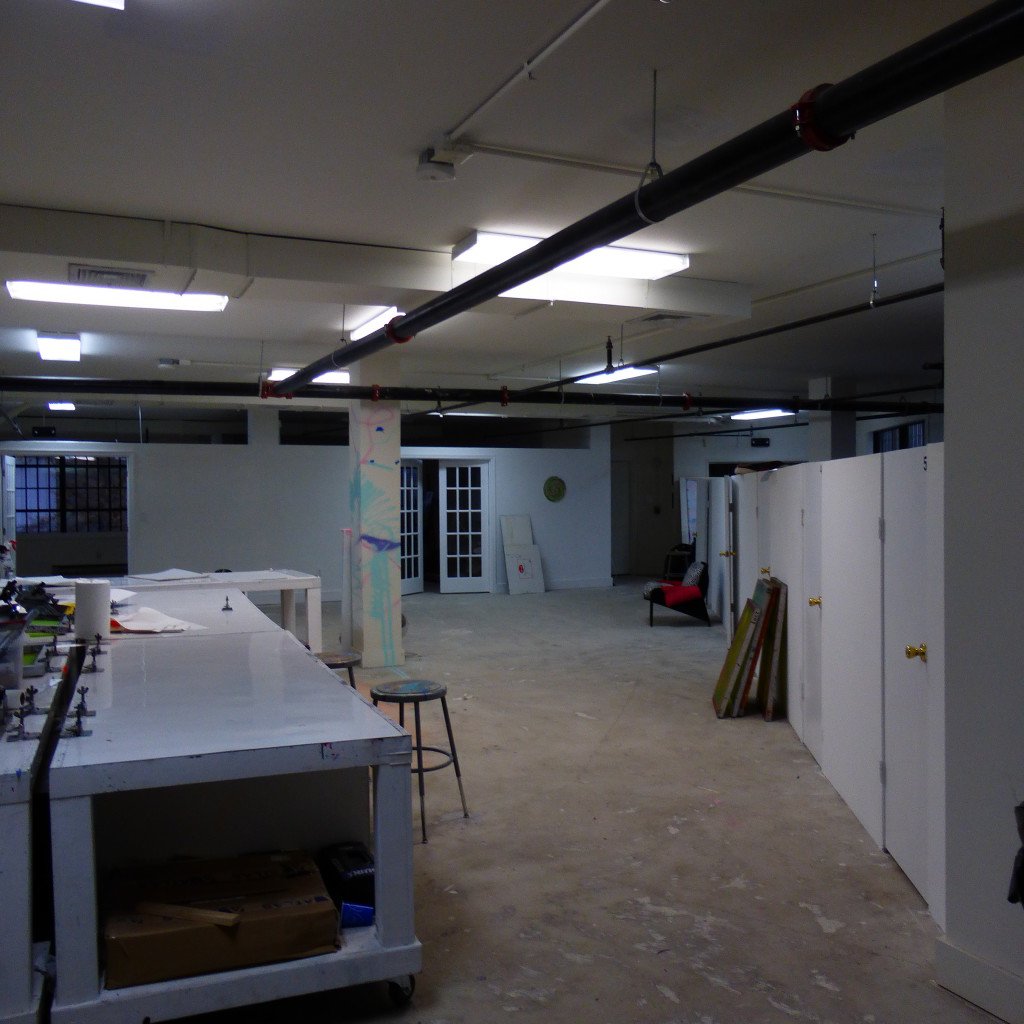 The studio sees two or three dozen regulars, some who come four or five times a week, and about 100 others who visit during the course of a year. According to Hartmann, “It’s beginners to lifetime artists, it’s really a mix.”  Some come for a class and never return; some come to shoot films or expose screens using the studio’s equipment.

She prefers to take on special projects.  “We’re going to do a release of the True Laurels Zine in April,” she told me.  In addition, “We would like to get into large, one of a kind pieces for restaurants. We have the capacity to do that.”

Open Studio DC moved to its Ivy City location in late 2014 after its former home, in Trinidad, adjacent to the H Street Corridor, was slated for redevelopment.  Like any other refugee of gentrification, Carolyn Hartmann was seeking undeveloped, open space at a reasonable price and found both in Ivy City.  The historic African American neighborhood is undergoing rapid change—but the long awaited development is concentrated along New York Avenue, in Douglas Jemal’s “Hecht Company Warehouse District.” While some of the changes—such as the opening of a neighborhood grocery store—are welcome, others are the hallmark of a new wave of gentrification. “My only concern is that people are being pushed out,” Carolynn Hartmann said, speaking of the ripple effect of new development.

Another concern is that Ivy City would yet again serve as a dumping ground for projects that would not be sited elsewhere in the city.  “There was a huge fight over a bus depot the city wanted to build,”  Hartmann said.  This depot was to be built at the site of the historic Crummel School, but the project was defeated by longtime residents, with the assistance of Empower DC–a local grass roots organization that has worked in Ivy City for over a decade, helping residents remember their past and claim their neighborhood’s future.  Hartmann showed me a poster of a detailed pen and ink portrait of Alexander Crummel printed for Empower DC’s September 2015 celebration of Ivy City’s historic Crummel School, once the symbol of a proud neighborhood, now a crumbling landmark that residents hope will be restored someday to become a much needed community center.

Hartmann continues to support her Ivy City neighbors. In February, she held a T-Shirt printing workshop for several young men who live in the neighborhood, showing them how to print T-shirts emblazoned with the slogan #therealivycity in bold, red lettering. These men are employed by New Majority Community Labs, working in partnership with Empower DC to collect data about the neighborhood and develop neighborhood small businesses based on these data.

Carolyn Hartmann, who was originally an attorney by profession, now considers herself a reformed lawyer. She left law practice 15 years ago when her children were young because of the long hours. “I’ve been doing art about as long as I was practicing law,” she said.  When her children were a little older, Hartmann took a few classes at the Corcoran College of Art and Design.  A few years later, when taking a class on screen printing for painters, she fell in love with the media, and continued her study in that field.  “They asked me if I would like to be a teaching assistant after a couple of years,” she said. Hartmann helped run the Corcoran’s screen printing studio, and eventually became an instructor.

At the time, there were few screen printing studios in DC open to artists, and Carolyn Hartmann realized that she had to open her own studio to do her art.  Thus Open Studio DC was born, on Florida Avenue, NE.  Over the past fifteen months, her studio has made Ivy City home–the REAL Ivy City, not the developer’s dream.