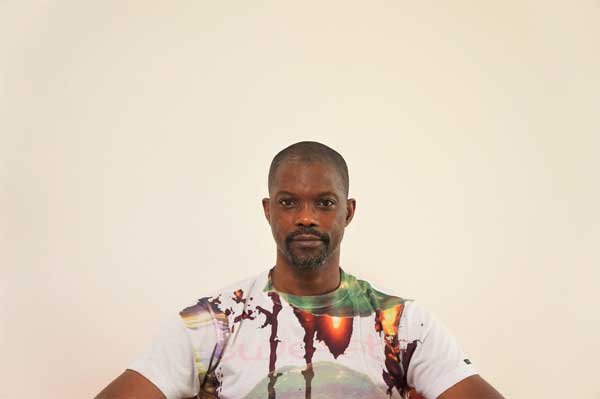 “What sign are you?” saxophonist Steven Cole asked Terrence Nicholson.  “A Virgo” Nicholson replied.  “You guys are good at starting things but not good at finishing them” Cole declared assuredly.  “That was just the thing to say to me to keep me going!” said Nicholson laughing. He had just discovered martial arts, a sport that would become his lifelong passion.

The year was 1994. Nicholson, a 26 year-old Anacostia native and budding lyricist, found himself touring nationally and internationally with a progressive Jazz band.  Nicholson recalls that Cole frequently played martial art films in the background when they travelled between sets.  Intrigued by what he saw, Nicholson decided to find a studio in DC’s Chinatown and take classes between tours. Ultimately, Cole’s veiled insult motivated Nicholson to deepen his martial arts practice.

Now a Fourth Duan Certified black belt of the Tian Shan Pai style of Kung Fu, Nicholson’s mastery of the martial art not only shaped his worldview and philosophical outlook but gave him the discipline he needed to pursue and succeed at several artistic disciplines all of which, like Kung Fu, require rote repetition to achieve prodigious results.

A true polymath, Nicholson not only excels at Kung Fu but also fronts local DC hardcore band Thayobleu, has a thriving practice as a visual artist and, more recently, began to flourish as a curator at the Anacostia Arts Center, Katzen Arts Center at American University Museum and the Hirshhorn Museum.

Early Influences and Education
Born in Washington, DC and raised in Anacostia where he still resides, Nicholson attended Archbishop Carol High School in northeast DC.  Nicholson reminisces fondly about his education at Archbishop Carol and believes it laid the groundwork for his love of learning.

Nicholson then attended Corcoran School of Art from 1987-1991 where he received a Bachelor’s of Fine Arts.  His Fine Arts education provided him with the basics for what would become his critically acclaimed installation and sculptural work.  It also connected him with many teaching artists and created a network from which he continues to rely as he advances in his career as a visual artist, installer and curator. 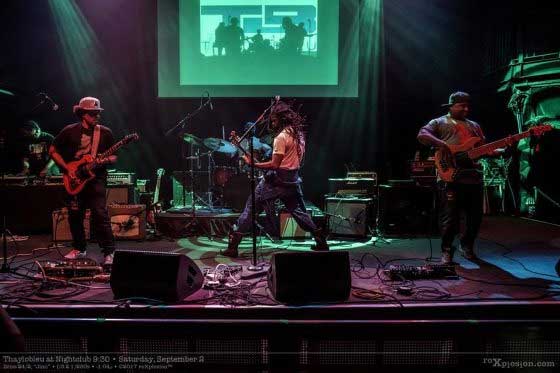 Nicholson’s Musical Journey:  “Send the musicians—the diplomats aren’t doing the job!”
Nicholson’s musical odyssey began as a lyricist traveling with a progressive Jazz in the early 1990s. He then formed Opus Akoben, a Hip-Hop group with two other members. The group produced two albums after landing a record deal with BMG France and toured throughout Europe in the late 90s.

While much has been written about Opus Akoben by local and national media, one of Nicholson’s greatest experiences came from his time as US State Department cultural ambassador.  The US employs “soft power” to create bonds with foreign nations using culture to shape how the US is perceived oversees.

During the Iraq War, the US’s image problem sustained some rifts around the world, particularly in the Middle East.  “Send in the musicians, the diplomats aren’t doing the job!” Nicholson joked when recounting how Opus Akoben received grant funding to tour as Cultural Envoys in 2005 and 2006 for the American Music Abroad program. “We need you guys to go to Bahrain,” Nicholson recalls a State Department official telling them.  The Hip-Hop group subsequently traveled to the Gulf state then to Jordan, Egypt, Palestinian Territories and Israel.  “We would do workshops and connect to the local hip-hop scenes.”  Later in 2006, the group toured eastern Russia, Mongolia and China.  In 2007, he returned to Bahrain and visited Suriname. Nicholson’s touring ended when his wife Sarah became pregnant with his son Gabriel later that year.  The group eventually dissolved in 2008.

However, Nicholson’s musical career would not end there. In 2009-2010, after attending a Queens of the Stone Age and Stone Temple Pilots concert, he decided to change musical genres altogether. He switched from Hip-Hop to Hardcore and founded Thayobleu, a band which he still fronts as its lead singer and bassist. The band plays at venues throughout the DC region.

From Honfleur Gallery to the Hirshhorn Museum: Nicholson’s Curatorial Practices
While no stranger to East of the River’s art scene—Nicholson has shown work at Honfleur Gallery—a twist of fate found him installing work at the same art space where his work had once hung.  Little by little, as several gallery positions were vacated, he was strongly encouraged by former Anacostia Arts Center Director Kate Taylor Davis to apply for the Creative Director position.  From 2016-2018, as Creative Director, Nicholson was able to do more than just install work but actually curate it.  He credits Duane Gautier, CEO of ARCH Development, which runs and operates Anacostia Arts Center and Honfleur Gallery, to “allow me to test and spread my wings.”

His curatorial work at Honfleur led Nicholson to connect with people he knew at Katzen Center at American University Museum.  In particular he recalls being involved in hanging the work of former teacher, mentor and friend Michael Platt.  Platt died suddenly in January 2019 and his exhibition at Katzen Center became something of a posthumous retrospective in which Nicholson played an important role in installing and presenting the work.

He has also worked at Hirshhorn as an installer. While the position did not allow him the free reign he was given at Honfleur to curate exhibitions as he envisioned them, it did allow him to connect with world renowned artist and master his technique as an installer. 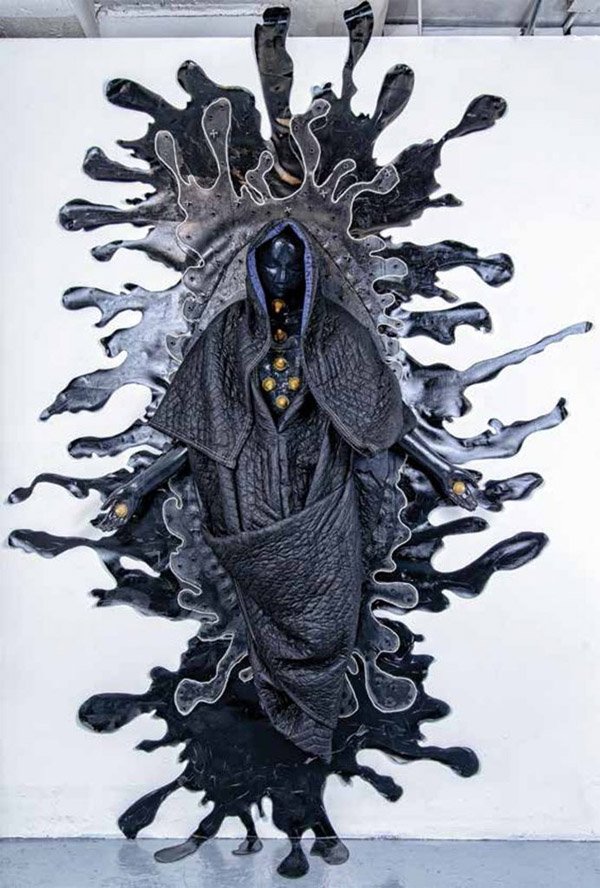 It takes many years, if not decades for some of Nicholson’s works to come to fruition
While an entire article could be devoted to Nicholson’s practice as a visual artist, one recent work in particular caught my attention as it exemplifies Nicholson’s methodology as a whole. He waits patiently, sometimes for decades until he can fully realize his ideas and bring them to fruition.

“Our Lady of Perpetual Servitude” shown recently at a group exhibition at Katzen Center, came from many years of research, painting and sketching.  Nicholson’s eight foot tall sculpture of the Virgen Mary seems to appear from the wall, draped in blankets, dark purple in coloration and bearing baby bottle nipples on her hands, neck and torso.

“When I was younger at Archbishop Carol, I used to have medals. I had scapulars. My mom and I were really into Catholicism.” During this time, Nicholson recounts that he had a “preoccupation with the image of the Virgin Mary and her apparitions seen around the world.” Over the years he drew many sketches of the Virgin but never created any finished work from his studies.  However, in the last few years, Nicholson states that “images [of the Virgin] started kicking in again.”

Several summers ago, he recalls seeing two Latina women, a mother and daughter, working rigorously to clean and maintain the appearance of a building near his home.  Describing what Nicholson calls “a memory flood” he drew an immediate comparison between these women and his mother, a nurse whom he rushed home to every night after school to catch before she left for her evening shift at DC General.  “I made these parallels with domestic workers. When do these caretakers take care of themselves?” Nicholson’s rendition of the Virgin has baby bottle nipples which represent women who give and give of themselves without regard to their own wellbeing.  “It’s a monument to caretakers.  It memorializes them.  How much do the people who give of themselves actually take time for themselves?”