I met with Tim Conlon in his Petworth studio and home on Tuesday, June 15th. We spent about an hour talking about his work and the history of graffiti in art and in our culture. He was preparing for the opening of his show, “Derailed” at Studio H, Saturday, June 19th. The interview transcript has been edited for concision and clarity. 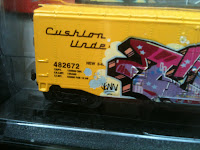