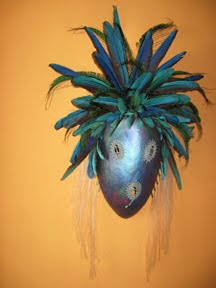 City Gallery regrets to announce the passing of gourd sculptor, Wally Szyndler. He was an inaugural member of the Gallery and one of our most popular and accomplished members. We are heartbroken and will miss him terribly.Wally began creating and showing gourd sculptures after his retirement as Director of Research and Demonstration from Melwood. His masks and containers were very well-received and he exhibited widely in juried and invitational shows, winning numerous awards for the work.

His work is exquisitely crafted pieces with perfect little joints, precisely fitted inlays, and exact stitching. Each piece is remarkable in its execution. And humor. Read the titles of Wally’s work, such as “Fantasy Diva” to the left, and gain insight into the man’s sense of play and wicked wit.

Wally approached this work with sympathy for the cultural traditions out of which it grew and deep respect for both the cultures and for his materials.

About his work, Wally wrote:

“My introduction to gourds came from a book that caught my eye in a craft display at a local bookstore in 2003. The many years I had lived and worked in other countries had instilled in me an enthusiasm for diverse cultures, especially those of Africa, India and the indigenous peoples of the Americas. My training as a horticulturalist gave me a natural appreciation for the fruits of nature. The years I had spent guiding persons with developmental disabilities in maximizing their often hidden talents had unwittingly prepared me to discover my own. I was a gourd artist waiting to happen.

As a practicing artist, many of the ideas that come to me come as dreams and then evolve along lines which I’m sure are influenced by the sights and sounds of my many world travels. Masks are for the moment what most intrigue me, and the final product is very often quite different from what I had in mind when I started.”

Wally’s career path included some exotic twists and turns. He was born in 1940 in Massachusetts and raised in New Jersey. For a while he was a Trappist brother with the Monastery of the Holy Spirit in Conyers, Georgia. From there he did a two-year stint as a Peace Corps volunteer in Nigeria and India. Wally’s experience with people with disabilities led him to become a co-founder of Melwood in 1968. His work with international organizations serving people with disabilities took him all over the world.

In retirement Wally became involved with Art Enables, an arts-based training and employment placement program for persons with developmental disabilities. He also served on the steering committee for the Capitol Hill Art League and volunteered at Watkins Elementary School.

To quote a friend, Wally was a walking hug. He was a big, warm, loving man with a huge laugh and so much joy in living that he lit up the space around him. People loved being near him, and at any show, he was the center of the action, laughing, hugging, joking, and holding forth about one subject or another.

There will be a Celebration of Wally’s Life on Saturday, July 17 from 4-7pm at the Melwood Center, 5606 Dower House Road, Upper Marlboro, MD 20772. www.melwood.org.

Please join us in offering love, support and sympathy to Wally’s family and his partner of 21 years, Jose Segura.