What comes to mind when you hear the neighborhood name Brookland?  Sleepy hamlet?  Off the beaten track? An historic neighborhood with a diverse community firmly rooted in the arts?  The first two notions are false (it is far from a bedroom suburb and only 3 Metro stops from Union Station after all) but the last has decades of truth behind it.   For generations now Brookland has been a bastion of bonhomie and home to a strong African-American community of artists, thinkers and writers such as painter Lois Mailou Jones, author Lorraine Hansberry and UN Ambassador Ralph Bunche.

That artistic diversity is currently on display in a neighborhood exhibition highlighting the work of six local African-American artists.  Organized by the Wohlfarth Galleries and DCTV in honor of Black History Month, the exhibition covers the first floor of the Historic Brooks mansion, built by Jehiel Brooks in approximately 1840.  The exhibition features two concurrent themes:  a lesson in neighborhood history and a snapshot of current artistic practices from the neighborhood. According to curator Lavinia Wohlfarth, there isn’t a specific theme around which individual works are built.  Rather, the idea is to show the wide range of styles – from landscapes to portraits – being created throughout the neighborhood. 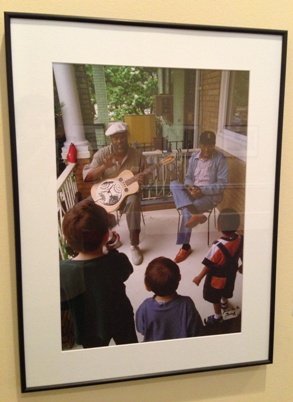 The historical ephemera are noteworthy.  Wohlfarth must have quite a scrapbook to draw from, as her two historical panels are rich in detail.  One large panel in the mansion’s formal entry covers the history of the neighborhood itself, while another large panel highlights the neighborhood’s luminaries and their contributions to the African-American community at large.  The displays are not what you’d normally expect in a contemporary gallery setting (they read more as history museum material) but they are fascinating in their own right, and provide background context from which to understand the art around them.  Newspaper clippings of “water pipe tours” and trolley lines seem quaint today, but serve to document the birth of the neighborhood.  One has to wonder if our current interest in the Monroe Street Market’s Artwalk construction will seem equally quaint 100 years from now!

With context in mind, we turn to the art.  The majority of the works are photographs with a few other media thrown in.  Two photographers in particular caught my attention.  While George Dalton Tolbert IV’s documentary-style photographs of street life in modern Cuba show a street culture rising above its crumbling architecture deserve a nod,   its Bonita Bing’s images taken right here in DC that capture the spirit of the neighborhood, especially Porch Blues which captures a love of music being shared through generations.  It’s probably the one piece that most eloquently links back to the historical memorabilia on the other side of the room; the viewer literally watches a baton of cultural heritage gently change hands.  The Cape Cod, MA works, a series of three gelatin silver prints from Mario Abatepaolo, are a meditation on the seashore.  While dissimilar to the works of Bing, I can still appreciate seeing them side-by-side; it’s a subtle reminder that the Brookland arts community is far from monolithic in its views on creativity.

Cheryl Edward’s Mandela Protection from her Ndebele Doll series also deserves a nod.  It’s a modern piece firmly rooted in traditional African American totems that also reflects upon the cultural heritage of the neighborhood.  Likewise Russell Simmons’ In the Day is an art piece, yet also a work of social commentary highlighting national and local politics of its time. Simmons happened to be in the gallery during my tour and described his neighborhood as “the best kept secret in town” – quite the chamber of commerce spokesman!

As a survey of neighborhood artists, the exhibition does have its limitations.  The show leans heavily on photography and having more works in other media would have better shown the area’s artistic diversity.  Still, the ethos of the show is that neighborhood celebration – not investigating complex curatorial questions – and on that note it hits the mark.  The addition of historical narratives also deserves kudos, given that historical context is more often seen in large-scale museum shows than neighborhood exhibitions.    It is an ambitious agenda that largely hits the mark!

The Brookland History Exhibit in Honor of Black History Month runs daily through the month of March at the Historic Brooks mansion, 901 Newton Street, NE.  Hours are 11am to 5pm.