DC’s preeminent art event, (e)merge has come and gone leaving varying impressions of the second annual DC art fair. I had the chance to experience artist David B. Smith’s performance Collaborative Karaoke and sit down with him to discuss his work. We met years ago at a Brooklyn gallery event, so we entered the discussion as friends for this first official interview on his work.

GV  David, tell me how you came to (e)merge as a participating artist.

DS  I was born and grew up in DC and as the son of an art collector and curator I was exposed to a wide range of culture in the area. I left DC to go to college and have been working as an artist mostly in New York over the last ten years. I’ve noticed recently that there has been a real push in the DC area to make young contemporary artists a part of the cultural dialogue. I was excited at the prospect of returning to engage with the community where I first developed an interest in art.

GV  I took the opportunity to tour your web site and view a selection of photos of your conceptual work as well as videos of some of your performance projects. Your education is in Advanced Photographic Studies, can you talk a little about your background and how you came to performance as a medium?

DS  I have worked with many mediums, but find performance to be central and just around the corner from all of them. For me, performance is an opportunity to bridge public and private space. Some people have no problem going to a club and dancing crazily for hours, but may not be able to engage easily one on one with another person. It became central in this project to allow the participants freedom to do something they may not normally do. In doing this they might imagine themselves differently. 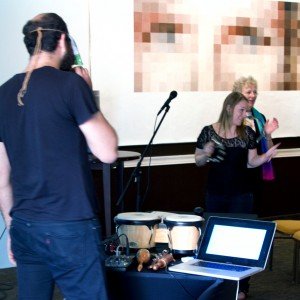 I recently curated 11 Hands Clapping at Vaudeville Park in Brooklyn, where I invited 11 solo artists using sound to perform sequentially in one space. This project helped me explore and compare individual and collaborative creative spaces and processes. I was interested in isolating the individual creative impulse, make expressive action, make a statement, and to connect with a community, or a public.

I began to observe in my own performances that I was facing and overcoming an anxiety of expressing and creating in a public spotlight. My work’s aim is to open myself and to become aware of my own desire to tell stories to other people, to examine the world through my own filter. I am interested in the looking at and documenting this apparatus by living it through shared experiences with other artists and viewers.

GV  Let’s talk a little about the karaoke songs you created for the performance. During the last song a woman who had participated intermittently throughout got up and sang an entire song fully engaged in the process and seeming totally uninhibited. It was really quite poignant.

DS  When I first started writing songs for Doom Trumpet a couple of years ago, I used other artists’ lyrics and wrote my own music around them. Eventually I began writing my own music and lyrics, in an effort to create epic pop songs. As an untrained musician my voice was quiet and tentative at first and then eventually became louder and more confident. My music was created by myself for myself, and I began feeling isolated. I wanted to see what would happen if another personality was introduced; I dreamed of an audience singing along with me.

The songs are delivered in a deadpan and indirect way. I don’t want to inflict emotion by making them melodramatic, however they all come from deeply personal experiences and feelings. I felt the tunes themselves needed to be as welcoming as possible so people would feel comfortable in getting up and joining in. The beats are inspired by indie rock, hip hop, tribal music, and eastern meditation. The idea of letting go of personal boundary, releasing the id and bringing latent meaning forth is central. It is a chance to see what kind of spirit comes forth for each performance. I wear a blindfold to take the edge off and make it more comfortable for the participants. People are invited up to the microphone to face other people, to face their panic, or embrace whatever mood they may be in. Another reason I wear the blindfold is to allow myself to hear more clearly and deeply, and to feel less self conscious of the audience and the person I am collaborating with.

GV  You allowed me to preview the songs while still in production and I found myself singing along, romanticizing each tune and accompanying lyric. There are 11 songs. Let’s talk about a couple of them.

DS  Valya is a repetitive, looping percussive sound with a low vocal drone. The structure came first setting up a sacred and solid space in which to tell a story. I set out to do something different with this song. It is simpler, leaving more space for emotion and vocal expression. It is a song about welcoming my god-daughter Valentina into the world and my sheer amazement of a new life and new friend.

For Kitten I collaborated with Brooklyn painter Louise Houghton Sheldon who wrote the lyrics. Louise painted the poem in watercolor on paper and gave it to me. I was inspired by her generosity and wrote the melody to her lyrics using guitar and percussive instruments, editing them to fit into the song. I played it at her birthday party and Kitten became my favorite Doom Trumpet song. Through this collaboration I realized there is a short cut by working with linguistically gifted people. Louise was surprised that it ended up sounding different than she had imagined. She thought it was going to be whiny and mischievous. It ended up having a more romantic and melancholy quality. Listen to Kitten here.

My friend Erica Magrey made the karaoke videos and chose whatever colors and fonts she wanted just so they change from one song to the next. I didn’t want particular imagery added to the visual component.

GV  I don’t want you to get away without talking a bit about your installation piece, Razzle Dazzle. Is there a correlation between this piece and your performance?

DS  I’ve learned that through showing a lot you only have so much energy and you want to have an impact. My key focus for (e)merge was the performance – to engage with the public directly. However, I realized that Razzle Dazzle is a stand in for another performance. In art fairs, the art is often expected to grab people’s attention, to entertain them, and to sell itself. My piece is a fake art fair booth and makes fun of these expectations. It is a group of deadpan still-life images I made, ranging from bullets, to moldy strawberries, to the view from a prison window, and they are all framed with contrasting ornate gold colored frames. I wanted the piece to promise something it wouldn’t deliver, and to camouflage my personal understated images as flashy and valuable art commodity.

GV  What is next for you?

DS  I am in the final steps of self-releasing Doom Trumpet’s first album, “The Pearl.” It will be available in late October for download, and as a limited edition sculpture of a small USB drive encased in a mussel shell. You will find it at www.doomtrumpet.com.

All photos by Gail Vollrath.