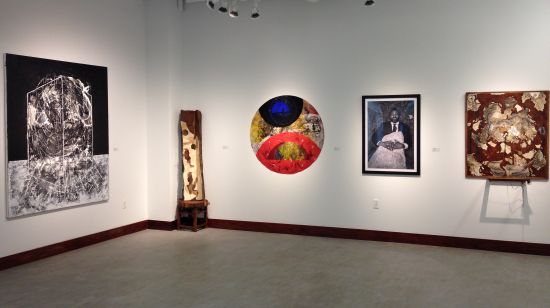 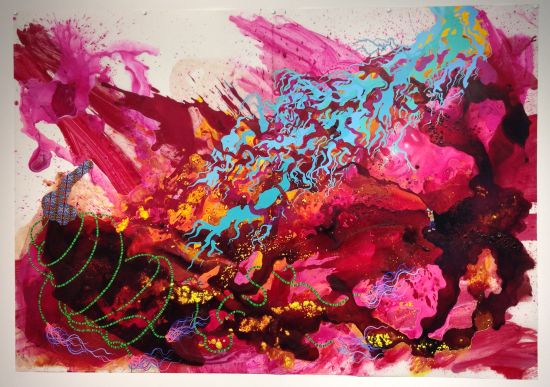 Listen to My Song of Freedom
Hedieh Ilchi
Acrylic and Watercolor on Mylar
Photo for East City Art by Eric Hope.

While at first glance, the wide variety of works make it initially difficult to pinpoint a cogent message, closer inspection shows certain themes beginning to arise. Many of the abstract works touch upon the systemic constraints posed by biology and/or geography, while the portraiture adds a layer of human complexity to the mix. Hedieh Ilichi’s Listen to My Song of Freedom presents a tsunami of hot pinks, vibrant ochers and blood reds clashing with cool blues and teals holding the fires in check; a diminutive female, her body eclipsed by her flowing black tresses, stands with bullhorn ready to reign in this fray. A similar feeling of kinetic energy held at bay is seen in Anne Marchand’s Moving Times where burlap fragments hold explosions of color in check. Joan Belmar’s Blue Note, featuring a lattice of red lines and black dots add a geographic note to this idea, while Ellington Robinson goes full-on geopolitical with his 4th Dimension. 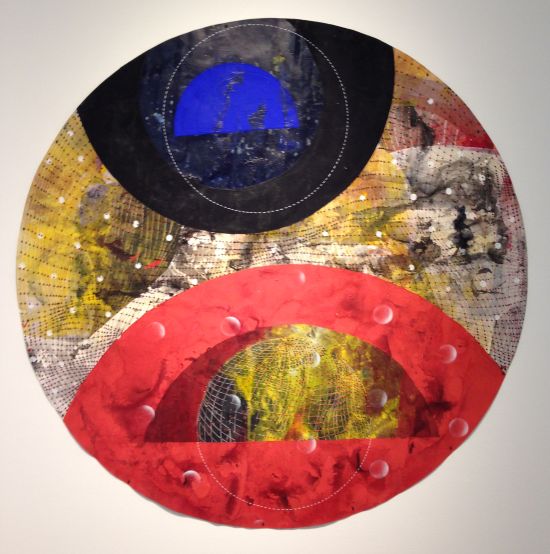 These constraints become more personal in Sheldon Scott’s John Henry Man, a character study of a man literally held firmly in check by gravity, but figuratively weighed down by unseen societal structures. Injecting a human element into the mix demonstrates how these unforeseen forces, kinetic energies and physical structures react to each other in sometimes chaotic ways. While this cacophony of forces can create beautiful moments like the northern lights, it can also influence political strife. Looking Back/Looking Forward demonstrates that investigating the overlapping, often unseen forces around us can lead to a deeper understanding of our societal norms, morals and political systems.

Editor’s Note: a previous edition had listed Nekisha Durrett as a participant.  Ms. Durrett was originally approached to be a part of the exhibition but was not able to participate.  The gallery’s listing was only recently corrected.

East City Art Reviews: We the People, For Show or For Sure: Chawky Frenn 2010-2020
Please Visit our Sponsors