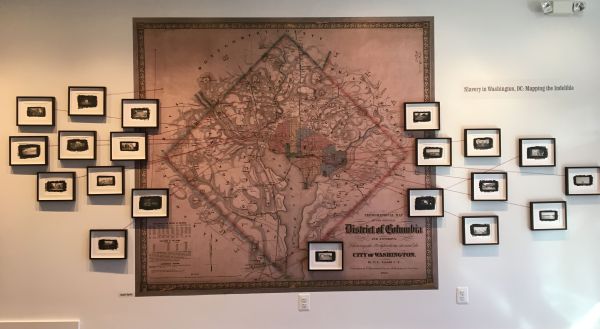 The black “hoodies” currently hanging in the front window of Gallery OonH provoke a sense of unease when walking through the front door.  These ominous shells, when viewed alongside the images of the dead black men and women directly adjacent, inspire a sense of dread that sadly has become all too familiar.  Indelible: That Which Cannot Be Erased examines the toll racial animus has taken upon this country, adding to the voices and experiences that have given rise to the #BlackLivesMatter movement.  Locally, we have seen exhibitions tackling this theme before; indeed, Nehemiah Dixon’s Suits of Armor Hoodie series has been exhibited widely throughout the District.  What seems to set Indelible apart is its desire to add an historical lens through which to understand contemporary outrage, underscoring how long-term disparities have created a confluence of events, including police shootings and large-scale riots, that we see playing out across television and social media. Co-curators Dolly Vehlow and Carol Rhodes Dyson attempt to bring these emotions closer to home, displaying an almost entirely DC-based roster of artists.

Though Winston Churchill was referring to state actors when he said “history shall be written by the victors,” his adage is apropos when considering how America’s turbulent history with slavery and race relations has been recorded.  To this day, our body politic lacks the wherewithal to undertake an honest, unflinching accounting of how a legacy of enslavement reverberates forward in time, subtly influencing social situations today. Certainly school textbooks outline the contours of slavery – the directional flows of the Slave trade across the Atlantic, the legacy of the Civil War, Martin Luther King’s speeches – but that outline barely hints at the cumulative emotional, social and economic impacts of the institution.

The work of Scott Davis addresses this historical erasure, using DC history to focus our attention on our immediate surroundings.  His inclusion in the group exhibition attempts to establish a contextual lens through which to consider the contemporary issues addressed by the other artists.  His Sinister Idyll Series (2013-onward) captures locations throughout the region where slaves were sold, worked or even rebelled.  These locations are researched by the artist and a small selection of the overall body of work is on display here.  For this exhibition, the majority of these images become a key component of a larger installation and are positioned alongside an expanded topographical map of Washington, DC that dates back to 1862, with taut red strings running from the photos to their corresponding locales on map’s surface; the viewer will notice the district’s original diamond-shaped boundaries are still intact. 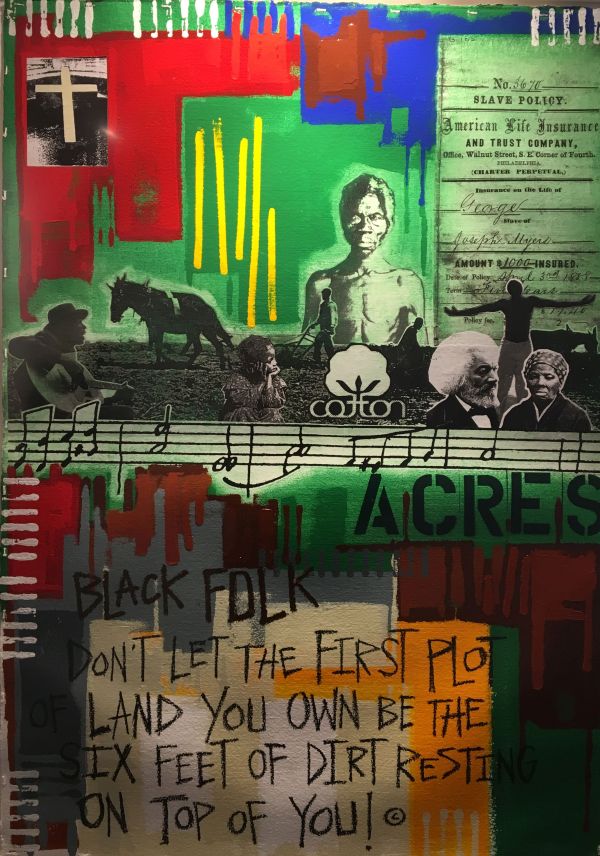 From across the room, the black and white photos appear to capture historical settings; it is as if Davis has found a treasure trove of old daguerreotype photos from the Civil War.  Look closely however and you’ll immediately recognize the modern time frame, as the images are populated by contemporary buildings, modes of transportation and pedestrians in the latest fashions.  This façade of antiquity is intentional and largely a byproduct of the platinum/palladium printing process the artist uses which heightens the greyscale tones within the composition.  Adding to this effect of age is the framing technique around each image where the artist has manipulated the black ink and allowed it to smudge and smear away from the defined borders of the scene.  In this manner, Davis attempts to jolt the viewer into considering the existence of a class of individuals whose histories have been wiped clean from the contemporary landscape.

Though admirable, this attempt at an historical reckoning is imperfect, hindered by a lack of curatorial clarity with regard to the impetus behind his work.  While the images themselves display a keen eye to pictorial composition, absent the map they do not link visually to the historical themes to which Davis identifies.  Indeed his six images displayed elsewhere in the gallery miss the historic gravitas imbued by the expanded map.  Furthermore, it is unclear why, given slavery’s wide arc through history, the artist (and/or the curators) focused on the year 1862.  Significantly, this date coincides with President Lincoln’s Emancipation Proclamation, which was issued on September 22nd of that year (entering in effect on January 1, 1863).  Is Davis attempting to make a social statement, highlighting the vestiges of slavery at the time of its eradication? While co-curator Carol Rhodes Dyson indicates she is comfortable with these lingering questions[1],  a curatorial statement or wall text that discusses the work and provides this needed context would enable viewers of Davis’ work to better understand the social implications he is attempting to highlight.

Where Davis’ work attempts to provide contextual information through an historical lens, the remaining artists engage the viewer on a more visceral, emotional level.  Two mixed-media collages by Oakland, CA-based Milton Bowens speak to the legacy of slavery on a more visceral level.  Six Feet Under (2005) places a musical staff at the center of the image, dividing the work into two integral units.  Above are visual elements that speak to servitude, including a slave insurance policy, a slave working a pair of draft horses and the seal of cotton trade mark.  The color blocking and that warning that “black folk, don’t let the first plot of land you own be the six feet of dirt resting on top of you!” in the lower portion of the work reads like the earth pushing down upon the soul. In one sense, this message could be seen as encouraging–a call of resilience to better oneself.  Yet, in the face such historical land-use adversities such as Jim Crow laws and neighborhood redlining, this is what it feels like to see the deck continually stacked and re-stacked against you. 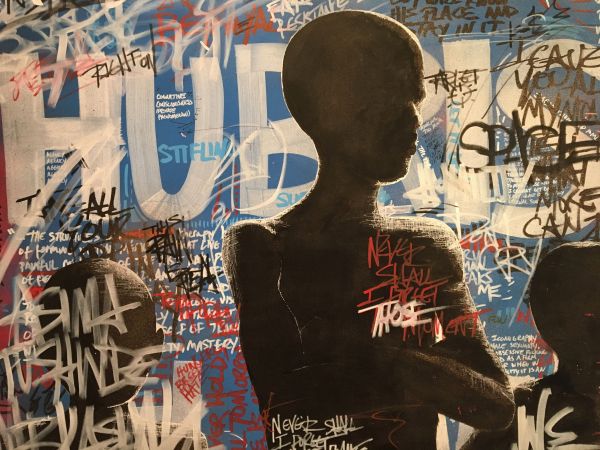 Rodney Buck Herring composes his works in a similar manner to Bowen but with much different treatment and resulting outcome.  Like Bowen, he builds the foundation of the work with large swaths of color and layers his components on top of one another in a manner reminiscent of a collage.  Representational forms of black men also figure prominently in the center of the work.  Here though, the additional components are mainly words, sentence fragments and perhaps lyrics written in quick, jagged strokes akin to graffiti.  Hubris/All This Winning (2019) positions a trio of figures within this complex web of words, creating a frenetic dialogue cloud that pulses with energy, as if these figures exist within a cacophony of noise that surrounds them on all sides.  The layers of words, the difficulty of discerning them and energetic zip in which they’re placed on canvas are reminiscent of the work of Jean Michel Basquiat who also regularly incorporated words into his graffiti-infused imagery.  Here though, the emotional energy feels immediately palpable and while not perhaps commenting directly upon any particular current event suggests an existential angst that surrounds and permeates the very existence of the anonymous figures.

Nehemiah Dixon and Justyne Fischer viscerally engage with the lived experience of black men and women in the #BlackLivesMatter age.  In directly referencing police shootings spun from the headlines, these two artists refuse to let the viewer sweep these instances of violence under the rug.  The exhibition includes three sculptures from Dixon’s Suits of Armor Hoodies (2015-onward).  This series has been widely exhibited throughout the area (for a thorough description, read some of my colleagues’ reviews here and here).  Perhaps less familiar to readers is the work of Justyne Fischer.  The exhibition features six works by Fischer, all but one dealing with recent deaths of black people in police custody.  While her pieces are topically charged with emotional content, one has to take a moment to admire the fresh perspective she brings to the art of woodblock printing.  Loosie Law (2015) focuses on the death of Eric Garner at the hands of New York City police.   Gradations of black ink create a three-dimensional effect, setting Garner’s body off of the building and sidewalk and clearly defining the two policemen that surround him.  Her treatment of the loose cigarettes, which seem to fly outward toward the viewer at the lower right of the image give an additional sense of the physical power the officers used to subdue their suspect.  The luminescence of his forehead, the small bouquet of flowers directly above him and the banner bearing his name all lend an air of beatification, as if Fischer wishes to anoint him in death with the honor stripped from him in life.  This theme is more forcefully suggested in the larger wall installation that contains Loosie Law alongside No Help in Oklahoma (2018) and Black Icons Insite (2019) placed together on a backdrop of a golden iconostasis.  In her own way, the artist is working to ensure that these brutal incidents will not incur the same historical glossing over as the moments inferred to in Davis’ photographs. 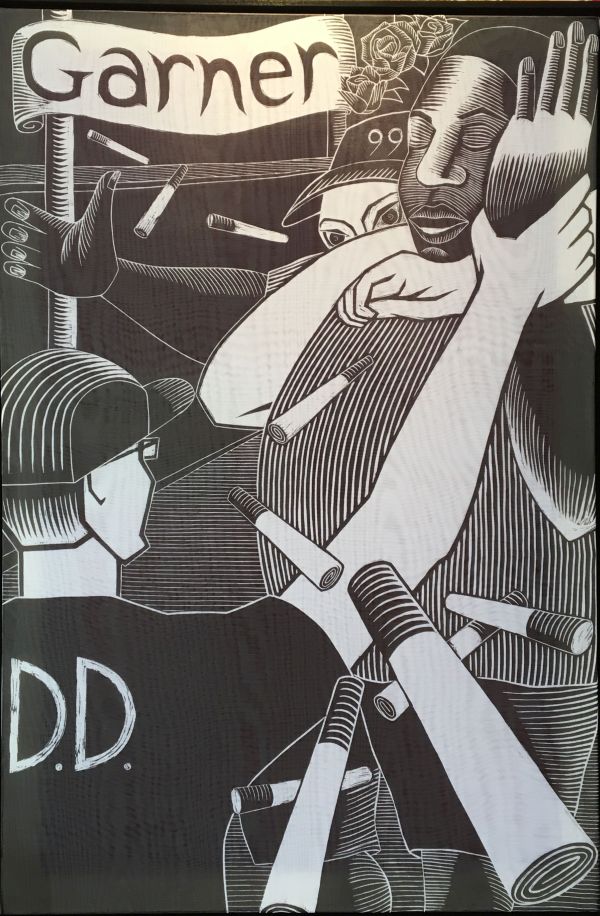 Less visceral in tone and more complicated to decipher is the video Tomorrow–As Seen Through the Rearview Mirror (2019) by Billy Colbert.  Shot as a montage of moving images, often from a car window, the film reads like visual poetry meandering along to the rhythm of conversations overlaid in the audio soundtrack.  The montage circles back to an elderly black man smoking a cigarette in front of a convenience store, suggesting perhaps that he is something of a protagonist in this tale.  Old home movies interspliced with contemporary shots suggest that perhaps this protagonist is reliving memories or contemplating the future – it is impossible to determine, as Colbert willfully distorts any notion of linear timeline.  In his artist statement[2] Colbert notes black people, “are not in control of our own image,” in an industry more interested in fetishization than authenticity.  In that regard, one wonders, is Colbert attempting to level the playing field or creating a sense of truth in storytelling?  The movie provides no answers, forcing the viewer to draw their own conclusions.

I recognize there can be pitfalls in critiquing an exhibition that focuses attention on Black lives in contemporary America. That is why context matters. While there is a risk of distilling the Black experience into a mere set of talking points, adding more didactic information to frame the historical context that underpins modern anxieties would have strengthened the exhibition, setting it apart from other shows that have focused solely on contemporaneous reactions to current events.  Though wall texts featuring quotes by Alice Walker and Larry Spruill attempt to address this concern, their inclusion instills a poetic veneer when a more factually-historic accounting of racial animus would have highlighted, particularly, the work of Fischer, Dixon and Herring in a more powerful manner.  What this exhibition makes particularly clear is that visions of a post-racial America are currently more wishful thinking than reality.  As Davis indicates, until we have an historically-accurate reckoning of our not so distant past, we may not fully appreciate the emotional nuances envisioned by his fellow artists.

Indelible: That Which Cannot Be Erased is on view through May 18, 2019 at Gallery OhnH. For more details, visit their website here.

This article was funded in part by a grant from the Capitol Hill Community Foundation.  Visit their website at www.capitolhillcommunityfoundation.com

East City Art Reviews—Degas at the Opéra: An Artist’s Journey

Plague Pictures or Art in Times of Pestilence