Bursting with color and evocative forms, Meditations and Epiphanies: Otherworldly Devices in Painting imagines the mystical and the absurd.  Curated by Kayleigh Bryant-Greenwell and hosted at the Betty Mae Kramer Gallery & Music Room in downtown Silver Spring, this exhibit combines works by Judith Benderson, J. Jordan Bruns, Kelly Posey, and Terry Sitz that, in the Bryant-Greenwell’s words, “develop heavily abstracted realities, creating works that explore unearthly wisdom, fantastic, inner awareness, singular instinct, and otherworldly aesthetics.” Each of these artists lays down a unique rendering of the ethereal and the ineffable.

Judith Benderson’s organic shapes swirl with intricate detail, recalling anything from microscopic life to deep space cosmos. Building-up layers of white and pastel over blackened backgrounds in works such as Luminescent Effervescence, values shift from solid to diaphanous, implying the organic, while hinting at the celestial.

Wanting to express “those things that initially cannot be put into words,” Benderson’s art is about personal insight; it is only on completion of a painting, she says, that she is able to fully grasp her reasons for creating each piece. What this may mean is that she works in what she sees as an intuitive process by which she explores her inner self – an inner self she wants to share with us.  She further explains that she is “interested in the invisible currents which constantly push and pull at us,” hoping that each of us might find connection and even joy in her work. 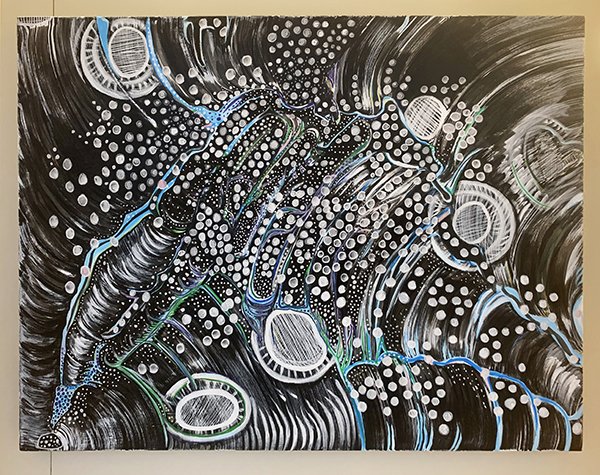 J. Jordan Bruns’ work takes a different path to, as Bryant-Greenwell describes it, “unlock the unknown and displace the banal.” Balancing between the architectural and the organic, his pieces, such as Anfractuous no. 7, mix colorful, hexagonal patterns into a maze of vibrant tissues. Says Bruns, he loves “discovering the unmapped worlds in the creation process as they are an escape from the daily mundane.” 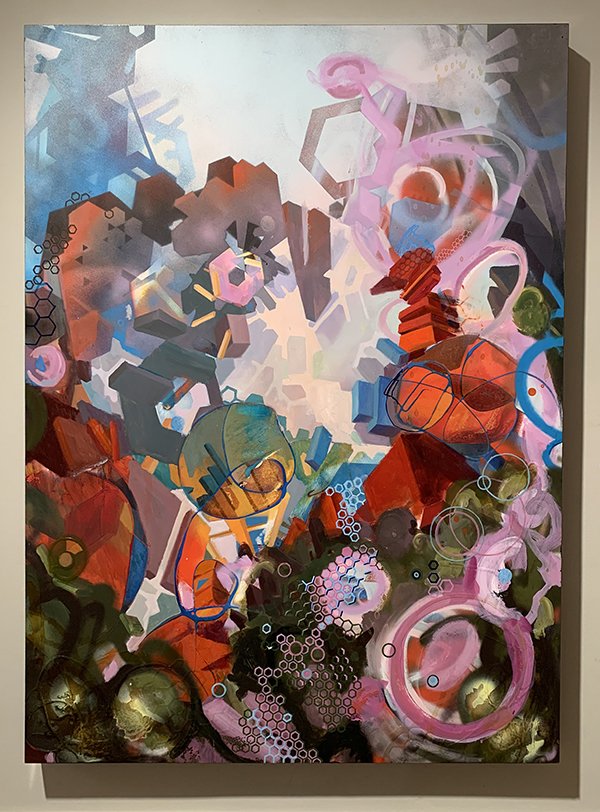 Similar in spirit, Kelly Posey’s psychedelic designs evoke a range of impressions, from whirling solar systems to growing vegetation. The clamor of color and tumult of elements lead us through a dynamic labyrinth of multicolored viscera. Though abstract, Posey seems deliberate in what she suggests, even if what she paints is hard to place. While some of her works stand on their own, her Psychedelic Petri Dishes seem to draw power from one another as members of a group. Her installation of these circular paintings read as a series of kaleidoscopic visions whose placement demand that the wall itself be taken as part of the work. Writes Posey, “this work is speaking about energy in nature, and the subtle or strong forces working beyond the human realm.” 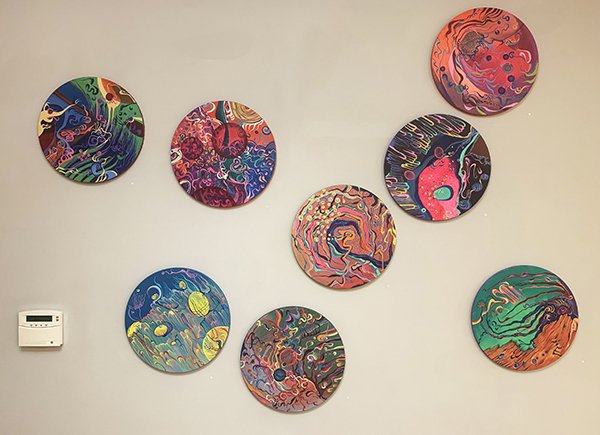 Terry Sitz clearly presents a different take on the mystical dreamscape, describing her work as “an excavation of self.” Painting over mixed media fabrics, she creates nonobjective compositions that could be taken for inner landscapes. Each work is dominated by a light blue pigment offset by browns, pinks, and yellows that are, in certain ways, reminiscent of Matisse’s cut out compositions of the 1950s.

In addition to Sitz’s nonrepresentative configurations, she has also included several abstracted figures. Though not addressed in the descriptive material directly, one wonders whether, in this context, she is depicting in a work like Leap of Faith, symbols for attributes of human spirit. 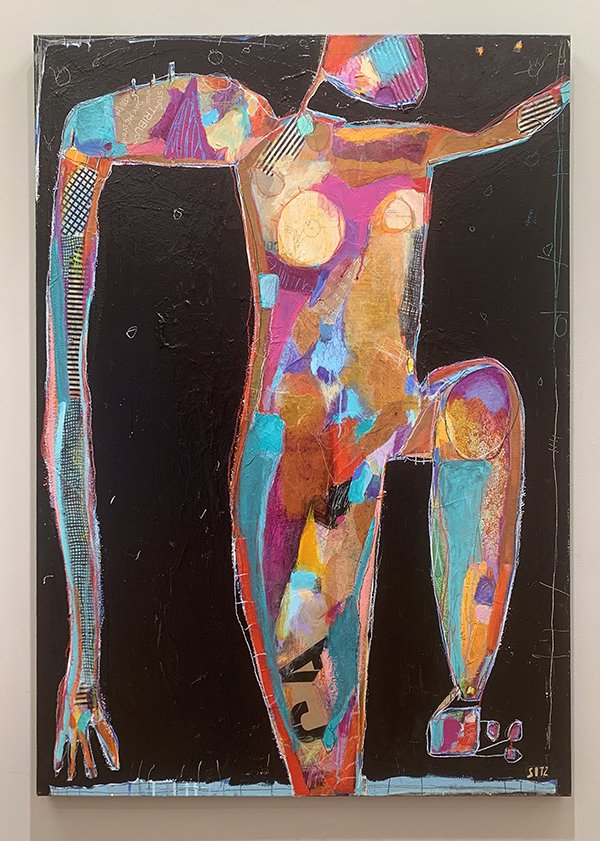 The real strength of any show is not only the aesthetic joy it inspires, but also the strength of its philosophical investigation. Meditations and Epiphanies: Otherworldly Devices in Painting does challenge us to seek answers to a few fundamental questions.  What, for example, does it mean to make the invisible visible? How should these works be understood: as visions of spiritual scenery or as symbols of the divine? Are these subjective encounters that are being shared or universal understandings of what we should all be seeing, thinking, and feeling? This show left me with more questions than answers, but that has to be a good thing, as its subject matter treads upon humankinds’ most sacred ground.