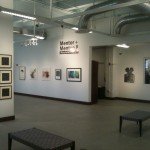 Opening Friday, December 7th at the Brentwood Arts Exchange is Mentor + Mentee II, a group show featuring Maryland-based members of the Washington Printmakers Gallery.  It is no small feat to stage a show featuring 20 artists, and I was impressed that Phil Davis, Acting Director of the Gateway Arts Center (in which the Brentwood Arts Exchange is located) was able to hang the exhibition a full week before its official opening.  Davis was kind enough to take a break from finishing touches to provide East City Art readers a sneak-peak before reception night.

Planning for the exhibition began in May when Davis contacted Annie Newman, director of the Washington Printmakers Gallery.  Davis had seen the WPG’s first Mentor + Mentee exhibition in 2009, and thought a follow-up exhibition along the same lines would make for an intriguing show in Brentwood.  Newman agreed, and given the gallery’s location in the Gateway Arts District, the two decided to focus exclusively on Maryland residents.  Ten artists were chosen and each artist was invited to select either a mentor (in the case of newer artists) or a student (for midcareer artists/instructors) with whom they felt an affinity.  The resultant mix is a crash-course on the state of printmaking today.

The 56 pieces that make up the exhibition’s checklist range from “traditional” woodcuts and lithography to modern photographic screenprinting.  Works by several artists using traditional woodcut and lithographic techniques read as homage to pinnacle figures of printmaking.  Jasper Johns Test Stone for the Phillips Collection by Scip Barnhart is perhaps the most notable of these in his direct referencing of John’s penchant for using numbers, stenciled letters and flag motifs.  Ask and Receive by Rachel-Ray Cleveland are good examples of how an etching plate can be reused to create multiple images with subtle variations.  Also quite nice are Max-Karl Winkler’s three vertical woodcuts whose skewed perspective adds an interesting dynamic reminiscent of traditional Japanese Ukiyo-e woodblock prints.  Naul Ojeda’s three woodblock prints, featuring spare shapes of brown counterbalanced by shocks of red ink, capture the spirit of a Henri Matisse cutout in print form.  In Concert, for example, features a brown piano reduced to a two-dimensional semi-spherical shape with an arc of red flowing up and over the pianist.  Visually, the simplicity of the red line counterbalances the much larger swath of brown, while on an emotional level one can almost feel the music reverberating around the musician.

Other artists use these same traditional methods to produce works with a more contemporary perspective.  Bill Harris’s two pieces Drowning in the Sea of Fears #9 and #5 feature some of the same reductionist techniques as Ojeda, but when placed on a background of shifting, overlapping patterns and color gradations the human form feels modern and complex.  The use of sharks feels both whimsical (in scale to the human figure) and slightly menacing (they are sharks after all).  At the other end of the same wall is Raj Bunnag’s colossal linoleum relief titled  Out of the Jungle It Came:  A Look into the Irrational Fears & Paranoid Delusions of a Sleep Deprived Stoner.  Clocking in at over eight feet wide, the work has all the hallmarks of an old master woodcut (witness the strong, light and dark lines in the side of the boat), but features decidedly modern subject matter, with equal parts of Hieronymus Bosch and Day of the Dead floating on a sea of Air Jordans; I didn’t view the piece so much as study it with intimate detail.

By dint of its size, Out of the Jungle.., somewhat dominates its corner of the gallery.  It would be unwise to linger there too long, as other jewels are waiting.  Continuing on the spectrum from “old” to “new”, several other artists in the show push the traditional boundaries of printmaking, incorporating materials and shapes that move the image into three dimensions. Clare Winslow’s Migration 1 and Migration 2 feature screenprinted fabric further embellished with embroidery.  Here the thread acts as a stand-in for ink, literally pulling the image up off the cotton backing.  In a similar vein, Lexi Lopez’s use of non-traditional black cotton as a background in her Segmented Portal series gives the ink the feel and texture of acrylic with an effect akin to Winslow’s.  Carolyn Hartman’s Untitledis notable for its photographic screenprint and textured canvas.  However, its Pauline Jakobsberg’s faux dresses-

cum-sculptural-forms hanging from clothes hangers that most elegantly wed traditional printed-on paper with shapes and ideas that expand the genre.  Jakobsberg’s use of real wire hangers brings us full-circle to Barnhart’s hanger imagery incorporated into his homage to Jasper Johns.  While likely unintended by the curator, it highlights how printmaking has progressed from being thought of as solely an art form unto itself into a tool that some contemporary artists incorporate with other mediums into a cohesive work.

All-in-all it’s a great tour through printmaking’s main forms.  My only criticism is that mentors and mentees are not necessarily shown side-by-side.  The thrust of the show — to experience how artists influence each other — could have been better highlighted by showing the artists’ adjacent to one another.  To be fair, hanging in that matter might also have created visual clutter (Davis did a harmonious job of placing similar-sized pieces together).  Also, I toured the show before gallery staff had installed wall labels (which will denote the relationship between mentors and mentees), so by the official opening date viewers will be able to more easily cross-reference the artists as they move through the space.  Even with that (slight) caveat, I still recommend the exhibition as a one-stop survey of printmaking in all its various forms.