For their first installed and viewable exhibition since the closures of the spring and summer of 2020, Nancy Sausser, Exhibitions Director of McLean Project for the Arts, was enlisted by Washington Sculptors Group to juror and curate this edition of their perennial collective Sculpture Now.  Selecting from an overwhelmingly large group of submissions, Sausser chose to represent 54 artists to exhibit in the ample spaces of the gallery.  With such a large number of artists, the resulting exhibition naturally shows a broad variety of approaches, styles and media.  Though there was no a priori stated theme, many, if not most of the works can be seen to reflect aspects of the current environmental crisis, either by their specific content or by the incorporation of found materials recycled into their construction.

Two interesting examples of this are Sookkyung Park’s Ebb and Tide (2019) made of hundreds of small, folded, blue paper origami forms to create a work that conjures the look and the movement of a strong wave.  The craft involved here is both immaculate and sturdy, defying the fragility of the medium.  Smartly positioned right behind Park’s work is Ruth Lozner’s Rising Tides, an open wood and glass structure that looks like a house on stilts of a kind that are often built near the water in many places.  Together they appear to respond to each other with a narrative about climate change and the rising seas.

On the wall to the left of this pair is, Navigating Climate Change #111, one of Alonzo Davis’ large bamboo and repurposed wind sail constructions in his Navigation Series.  The series was, as I noted in my review of his 2019 exhibit, inspired by the seafaring culture in the Marshall Islands of eastern Micronesia in the South Pacific, a region of more than one thousand islands and islets spread out over an area of several hundred miles.[1]  These islands are now under threat from rising seas.  Davis’ elegant work is not confined to this reference, however, and stands on its own as a strong abstract composition.

Fairly dominating this main space, however, is Jacqui Crocetta’s large sculptural ensemble titled In The Shelter of Each Other (2020). The artist has described her intent with the work, and the origin of her title in this statement:

This work honors and brings attention to the victims of extreme weather events that have become more prevalent due to climate change. Wildfires, heat waves and floods disproportionately affect vulnerable populations. What will inspire us to make necessary sacrifices to better protect vulnerable people and our planet? ‘It is in the shelter of each other that the people live’ –Irish proverb

The multimedia work involves a wood structure with a pointed top that might reference the shelter of a house, a chapel or a shrine.  In fact, Crocetta has said that she was inspired by roadside shrines of the kind one sees in Italy where an image of a saint is literally housed, often behind glass, for the passer-by to stop and say a prayer, usually for protection while travelling.  Here the underlying theme of sacrifice is signified by the beautifully carved lamb in Crocetta’s glass relief placed in the center box.  The lamb is a sacrificial animal, and unavoidably brings to mind Christ, the Agnus Dei (Lamb of God), particularly in the context of the shrine-like black structure, thus widening the potential circle of meaning suggested in the work and setting it into art historical context.  Indeed, conversations with the artist about the iconography of the Agnus Dei indicated her interest in this image, particularly as it was used in objects made as papal medallions from the middle ages through more modern times.  These were often used to make wax impressions, many of which survive.  The sacrifice of the lamb who sits so comfortably in Crocetta’s relief is implied by the red band that descends to the vertical base where it becomes a series of red stones that pool like blood at the bottom.  A reference to the sacrifice of the most vulnerable, embodied in Christian theology by the Crucifixion, can also be inferred here, and with it perhaps hope.  Hope not only for human victims of climate change and its consequences, but also for animals and the environment is signaled by the branches that frame the lamb.  In all, this is a work that can be interpreted on many levels, and whose imagery speaks loudly on its own.

Other works that stand out in this remarkable exhibition are Craig Kraft’s magnificent light sculpture Damaged Spirit of the African Elephant. It was completed in 2018 and included in the exhibit I curated of work that was inspired by the artist’s trips to see cave art in Europe, Indonesia and Africa. In Africa he was deeply impacted by the suffering of the elephants which have roamed those places for millennia, were sacred to the people, but are now being brought to the brink of extinction.

Melissa Burley contributed a work that refers to these themes on a much smaller scale, yet is both visually and intellectually compelling.  When Time Stood Still is an example of this artist’s re-use of old materials, combining them with halogen lighting.  Within a recessed wooden oval frame that may once have held a clock, Burley has installed a variety of found clockworks that will no longer tell the time.  A key on the side of the glass covered “clock” suggests that a hand once wound it, the light inside draws the viewer to contemplate that idea.  This is a striking example of the re-use of found materials by sculptors in this exhibit.

Remembering the Hand, by Michael Thron, is to the left of Burley’s old clock—another example of Sausser’s brilliant placement of this exhibit.  A group of pick-axes and hammers stands in the corner.  These are, according to correspondence with the artist, “recreations of the tools that [he] grew up using around [his] father’s property.”  The works in the gallery are cast in bronze and iron from sand molds made from these old tools, “transfiguring the found object into constructed forms.”  They still speak of heavy work on the land done with the strength of the human arm and hand.

Overall, the exhibit is marked by a very high level of craftmanship.  Before closing, I’d like to mention two works that stood out to me from this point of view:  Daniel Shay’s Petit Bamboo and Chris Romer’s collection of Fancy Charmers.  Shay’s work is hard to define.  On a wooden backing of about eleven by nine inches, the artist has built up a complex collage of bamboo pieces, some flat, some rounded, some cut crosswise, a couple shaped almost like tiny boats.  At a depth of about three inches, he has painted them so that the result is colorful, but restrained.  It is carefully made, connoting a particular respect for bamboo, a renewable energy source.[2]

Chris Romer’s Fancy Charmers are just that.  An array of small wooden forms, reminiscent of plumb bobs, are carved and turned with remarkable skill.[3]  Romer’s painting process is craftsman-like.  With great patience, the artist paints his little sculptures and then sands them down, repeating the process until they gleam with a deep layered shine.  The artist has said that his inspiration for these are American fish decoys which are a recognized folk art form.  The art with these lies somewhere between sculptural abstraction and folk art, but the “charm” is the way they seem to beg to be held in your hand.

[2] Cf. https://www.earthava.com/bamboo-tree-renewable-energy-source-and-so-much-more/ .  Shay’s other sculpture in the exhibit is also made from variously sourced bamboo.

[3] A plumb bob, or plummet, is a weight, usually with a pointed tip at the bottom.  Suspended from a string, they are used as a vertical reference line, or plumb line.  These instruments have been used since ancient Egyptian times. 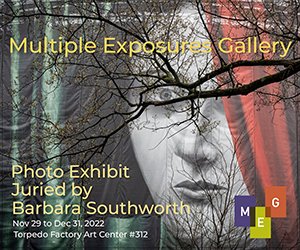