Strictly Painting 12, the title of McLean Project for the Art’s current exhibition is something of a misnomer.  Technically speaking, the exhibition contains works that include three-dimensional elements and employ non-paint mediums.  A more apt title for the 63-work exhibition might well be Strictly Color 12.  Jurist Adah Rose Bitterbaum has selected 56 artists whose approach to color (or even its creative absence) defines the visual forms displayed on canvas and paper.  In the case of more narrative works, these colors help to elucidate the parameters of the story.  In the more abstract pieces, color is used to create flowing, expressive movements of paint and ink.

Strictly Painting 12 broadly defines the genre of painting, including various forms of mark-making on flat backgrounds and even allowing for the occasional experiment into three-dimensional supports.  The majority of the selected pieces lean towards abstraction, and this is especially true for those works incorporating materials other than oils and acrylics.  While there are less refined works that use sensationalist color palettes to draw the viewer’s eye away from unresolved ideas or the lack of technique, several works clearly capture the fluidity of paint and the nuanced surfaces it can achieve as it travels across the canvas. 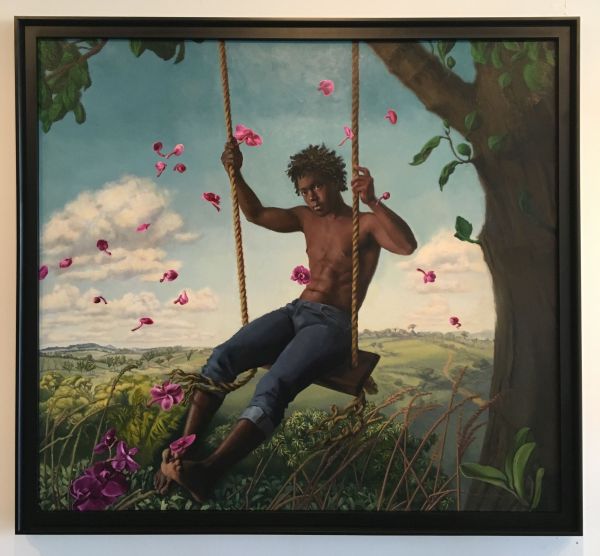 The more narrative works are fairly equally divided between figuration and landscapes.  When considering these works, Michela Mansuino’s The Memory of Youth immediately stands out, not only for its scale in relation to the works around it but also its skillful brushwork.  Mansuino captures a moment of spring, focusing our attention on a young man on a rope swing while a verdant landscape recedes deep into the distance under clear skies.  The artist’s hand is subsumed within the realist treatment of both skin tone and surrounding plant life.  Violet flower petals hovering in the air add both an emotional punch of color and a heightened sense of narrative possibility as the wind swirls around the seated figure.  The emotional poignancy implied here stands in contrast to the relaxed feeling of Sally Kauffman’s Chill Out.  Featuring a crowded park filled with patrons of different ages and types, the sense of ease results from the artist’s broad brush strokes that use swaths of color to indicate the various seated individuals.  Here the perspective is flattened and the blurred crowd could be seen as perhaps more abstract than figurative.  Still, her use of color is shrewdly considered, its drips and swaths creating a buzz of conversations between roughly painted bodies.  While in Mansuino’s tightly drawn work the narrative exists primarily in the mind of the viewer, Kauffman’s narrative impetus lies within the conversations taking place among the seated figures. 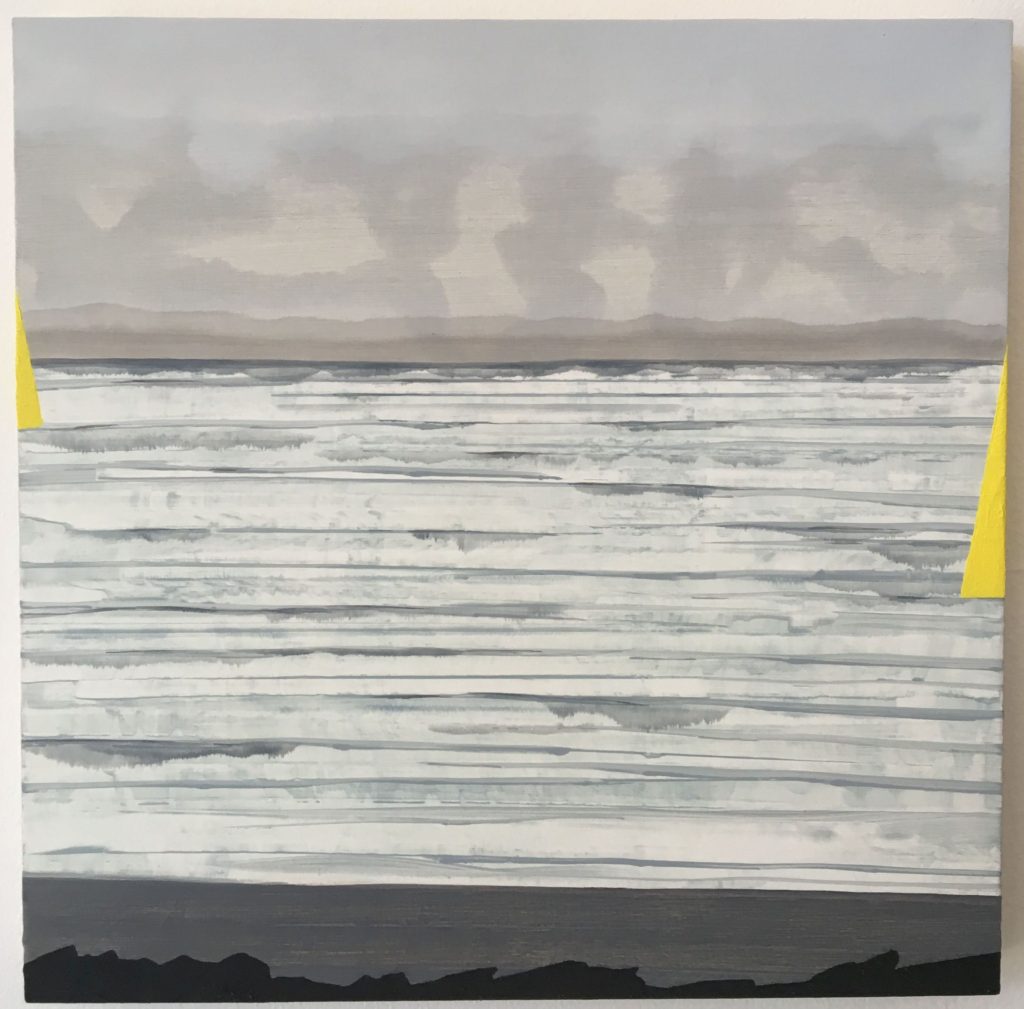 Several landscapes also feature powerful, if more subdued, narrative moments.  Still Life with Lemons by Begona Morton heightens the attention placed on a bowl of lemons by setting them against a background palette of more somber blacks and greys.  That same shade of yellow appears Magnolia Laurie’s How Far is Far where it suggests the sun asserting its presence over a muted seascape.  Much like Mansuino, Trevor Young subsumes his brushstrokes to create a realistic stage set for children at play.  The viewer stands outdoors, looking up and into a well-lit indoor play area that shines brightly in the night setting.  Titled Gymnasium, it clearly is intended to conjure thoughts of exercise, but it also bears a likeness to fast food establishments that use childrens’ play areas to lure in weary parents.  The work is devoid of human figures and with the darkened foreground providing no contextual clues, Young allows viewers to sketch their own narrative possibilities.  In a similar manner Bill Firestone allows viewers to develop their own idea of what constitutes a scenic view with Constitution Avenue.  Short, punchy brushstrokes allude to the downtown monumental core, while the vertical drips at the bottom of the canvas might suggest a cityscape seen just after rain.  The work is rendered abstractly though, and when considering the tones of orange and yellow at the bottom and left sides of the work, other viewers may reach far more dynamic conclusions. 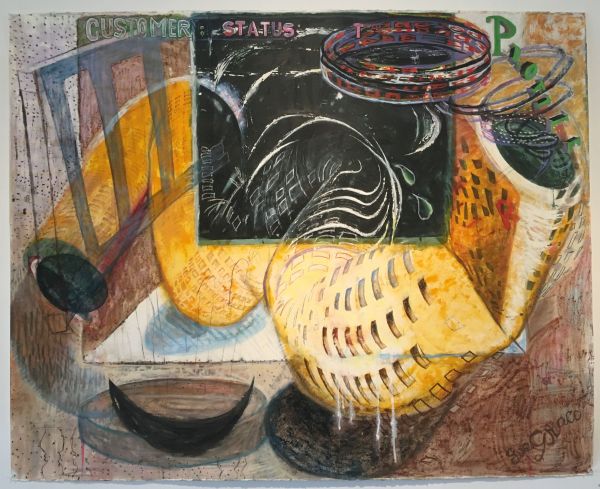 This concept of allowing the viewer to interpret threads its way through the bulk of the exhibition with abstract works that rely on line, shape and color to inform their narrative possibilities.  Sue Grace asks the viewer to engage with her Data Rumpus in which a snake-like form undulates horizontally across the paper.  Suggestive of architecture, the shape moves through various layers of possibility, as suggested by the colored planes of black, white and umber in the center of the composition.  Words forming a horizontal band at the top provide context for the viewer, connoting the artist’s interest in considering how the flow of our personal information through data networks impacts our daily lives.  Cameron Ritcher takes us back to a pre-digital era with Onyx Black/Alabaster, which upon cursory view resembles sheets of crumpled paper.  Noteworthy for its austere use of grayscale tones, the work slowly opens to include both notions of landscape or perhaps fractal patterns viewed through a microscope. 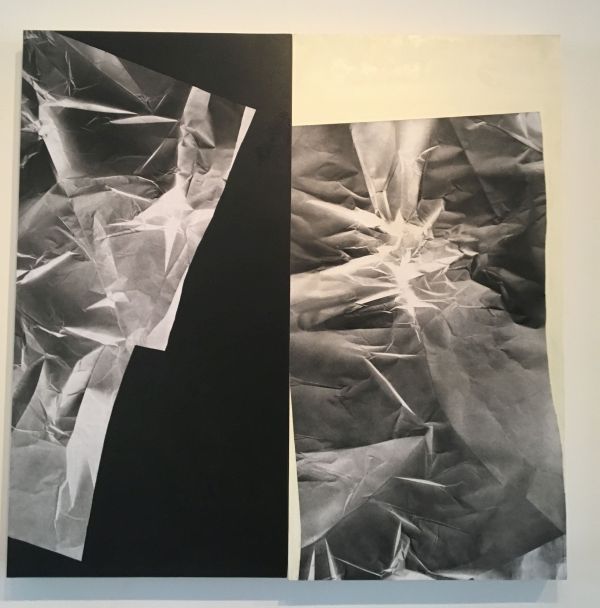 The exhibition moves into pure abstraction with paintings by Chee Keong Kung, Bobby Coleman and John M. Adams that incorporate linear elements and strong color blocking to create visually-immersive scenes with no recognizable narrative.  Kung’s Riff I displays the most audacious mark-making, with brush strokes that leap pell-mell across the canvas.  Their freneticism is only slightly tempered by the tints of blue and gold at the center of the canvas that suggest the nucleus from whence this energy may begin.  Adams tames a similar energy that flows through jots of green and grey by adding strong bands of white in a horizontal pattern across the canvas.  The bands lend perspective to the picture plane by seeming to rest atop of the swirls of color, as if holding them back from leaping off the surface of the work.  Though his picture plane is relatively flat as well, Coleman layers his defined squares and hatchmarks above candy-colored swaths of pink and melon to create a mood that is decidedly playful in nature. 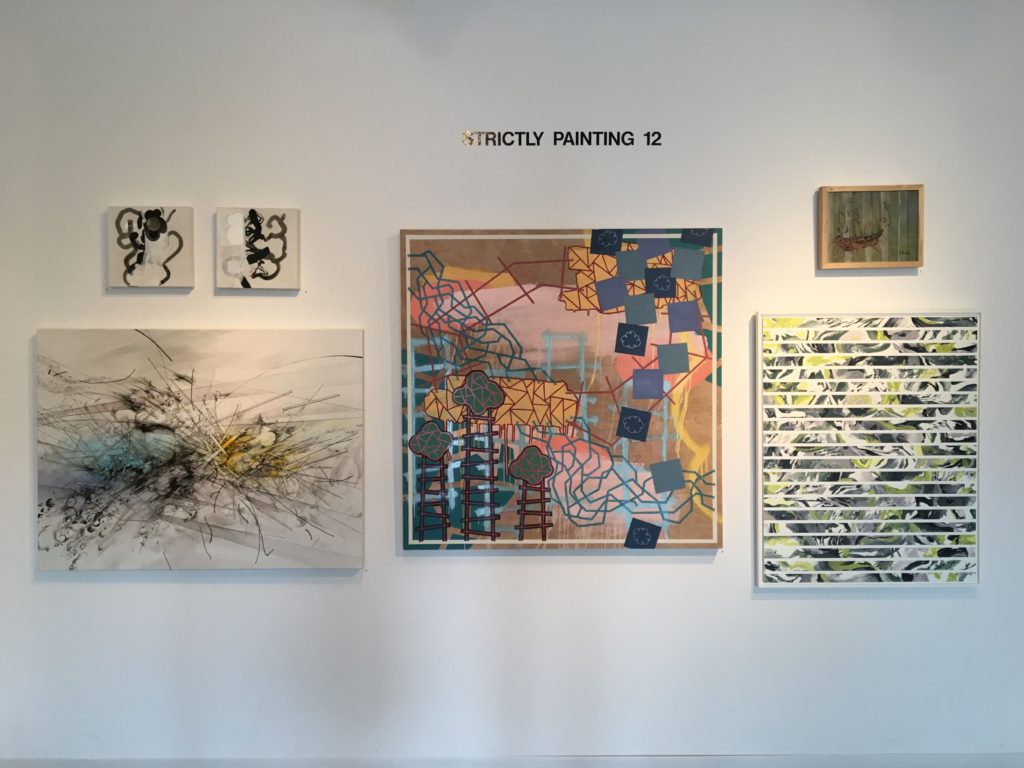 Use of color is also the key to abstract works that seek to disrupt the very notion of a traditional picture plane itself.  While William Whitaker’s Posture (2) incorporates oils into his work, it takes the form of assemblage rather than two-dimensional painting and seeks to play up the tension between planes of bold red and deep black.  Displaying a similar contrasting technique in more nuanced tones is Jeffrey Smith’s Aphelion which contains a dark, muted landscape that physically recedes from a raised, central point to the sides of its hexagonal frame.  The muted landscape is punctuated by an orange sphere at the top of the work that is diagonally aligned with a deep black sphere at the bottom, suggesting either celestial bodies in motion or perhaps even planes of existence removed from the visible landscape.

While the emotional tenor of the works shifts as the viewer moves through the room, there are many instances where works create a visual dialogue with their neighbors.  The combination of Kung, Coleman and Adams in particular generates an intriguing dialogue among the three different treatments of color.  Ritcher’s diptych hung directly beside Elzbieta Sikorska’s Golden Statue featuring two impressions of a human torso suggests new possibilities for engaging with the human form.  Seen side-by-side, Whitaker’s Posture (2) and Tom Hill’s Disruptive Influence juxtaposes austerely formal and dramatically playful approaches to both color and form.  In this regard the gallery staff has done an admirable job of placement with the aim of creating a more engaging exhibition.