The nineteenth iteration of the finalists of the Trawick Prize for Contemporary Art is now on view at Gallery B in Bethesda.  The work in this exhibit falls into two distinct categories: reflections on identity and heritage, and meditations on nature and climate change.  Of the eight artists exhibited, six fall into the former, with two in the latter.  There are no big splashy entries in this show.  It all seems very serious, wistful, and in some cases, a bit agonizing.  Given the fact that most of the artists are fairly young, this aspect of the show probably reflects their responses to the unhappy events of the past year, both natural and political, in this country.

The winner of the top prize that carries an award of ten thousand dollars was Cecilia Kim, a native of South Korea who, although still young, has led a peripatetic life moving around a number of American cities and returning to Korea on at least one occasion.  In response to this, the artist has made an obsession of her identity and her biography which is the subject of one of two videos in this exhibit.  A Warm Orange Color (6:18m) features close-ups of her face narrating in Korean and English memories of her childhood and her relatives and neighbors.  It is strangely compelling despite the banal content.  At times the imagery is altered with abstraction and graphic interiors that are apparently projections of the artist’s memory. It is perhaps the extreme intimacy of her stories that both draw viewers as well as put them in the uncomfortable place of voyeur.  Kim’s other work, English Lessons on Hospitalization, a two-channel video, 11:34 minutes long, is even more painful and commanding of sustained attention.  In one channel the artist sits at a table correcting a page of text with a red pen. In the other a young man relates his experience, in broken English, as an immigrant finding himself in a psychiatric ward after three suicide attempts.  The video comes from a body of Kim’s work exploring “how language fails, or fulfills, its function as a communication tool.”[1]  Though depressing, it clearly achieves its intention.

Almost as depressing, but for a different reason, is the work of multi-media artist John Ruppert.  Among those who did not win a prize, Ruppert is represented in the show with three intensely colored photographs of drifting pack ice in the Arctic and a related sculpture on the floor.  In the center of the room, it draws attention by its modest appearance.  But when one understands that it is a three-dimensional response to the photos that document climate change in the region, it becomes more Interesting.  Berg #2/Echo Rock Series is comprised of a large, dark gray slate rock and a cast aluminum one next to it painted white.  Ruppert makes no effort to hide the fact that he has imitated nature with the latter, a fact that contributes to the idea expressed here that human intervention and continued manipulation of this fragile ecosystem is resulting in great loss.  We may be left with nothing but imitations.

Stephanie Garmey is the other finalist interested in these themes, particularly in the ways in which “human lack of deference to the delicate balance of nature” impacts the natural world and the life of animals who have their own “instinctual and experiential creature knowledge”.[2]  Although her work tends to focus on animals, Dream Boat, her installation in this show seems to be more concerned with the oceans and their current precarious health.  A boat shape made of reed slats is suspended from the ceiling.  From it long skeins of blue yarn fall onto a blue patch on the floor.  The whole is in the corner of the gallery, which is painted dark blue like the night sky.  Instead of stars, the wall is strewn with yellow cut-out butterflies.  Rather than conveying a heavy handed political message, the work has a dream-like effect, reminiscent of a child’s room (the suspended boat conjures a cradle) or a serious story told in an illustrated book for children. 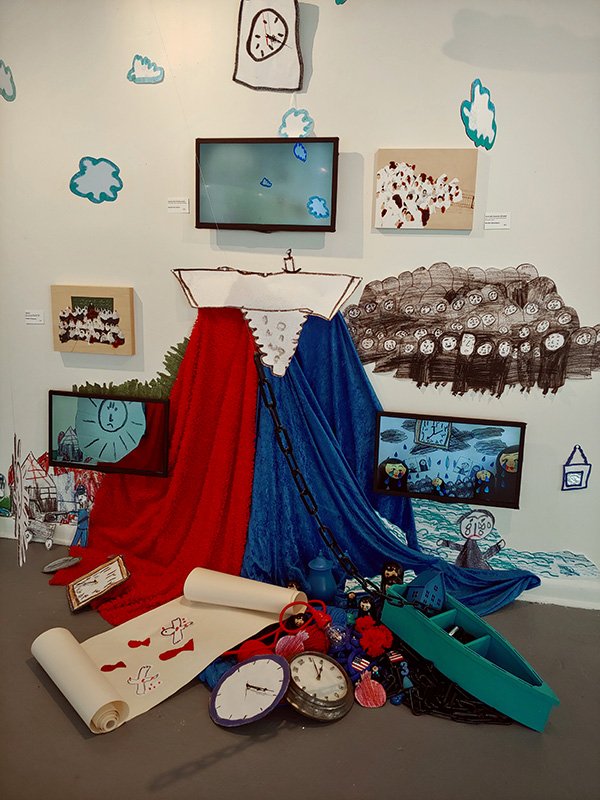 Mojdeh Rezaeipour was second place winner of the Trawick Prize in 2019, but did not win a prize this year.  She is represented in this show by three works exhibited together so that they appear as one installation. The artist has described herself as “concerned with excavations of material memory at the intersection of my own story and a collective diasporic story”.  Two years ago her mother gave her a portfolio of her childhood drawings, done in Iran before she emigrated to the United States.  Rezaeipour has integrated the drawings and imagery from them into this installation which also includes strong references to the passage of time.  One striking detail is that all the women in the drawings of her youth are crying. This childhood does not look happy.  In the older works on wood, all the schoolgirls are in tight hijabs, and they are faceless.  Only the teacher in the eponymous work is identifiable.

The drawings of Ernest Shaw, while clearly intended to allude to Black identity and experience, are relatively neutral.  Shaw, born and raised in Baltimore with a MFA from Howard University, is a long time teacher in Baltimore schools.  The two charcoal drawings in this show are sensitive renderings of two young men.  Of the two, Hooded–a pensive youth seen in profile with the hood of his jacket over his cap–stands out for its probing of character and handling of the medium. Shaw specializes in portraits, which he also paints, but his drawings are more striking and sympathetic.

In sum, the current art trends toward both identity politics and concerns around the environment and climate change are dominant here.  Sobering to say the least.

[1] The film was previously shown in the Immigrant Artist Biennial (virtual) at the O Gallery in Seoul, Korea.  https://virtual2020.theimmigrantartistbiennial.com/mother-tongue/cecilia-kim