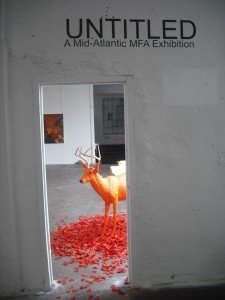 Currently on display at Industry Gallery through August 13, 2011 is Untitled, a traveling exhibition featuring works from eight regional MFA graduates.  Industry Gallery, known more for its display of conceptual, sometimes avant-garde, furniture-cum-sculpture is hosting this exhibition concurrently with Conner Contemporary’s annual Academy exhibition which also showcases some of the best emerging artists in the DC region.

Untitled provides a unique twist to the traditional gallery exhibition by uniting these up-and-coming artists with emerging scholars and curators.  While art is certainly front and center, the scholarly critiques and research in the show’s accompanying catalog add a rich depth of perspective akin to what one might glean from museum show.  Mike Maizels and Brittany Strupp, the show’s co-curators from the University of Virginia, realized that while early-career artists have increasing opportunities to engage gallerists and patrons, emerging art scholars and curators often have more limited contact with their artistic peers (“most of us [usually] work with dead artists,” Ms. Strupp notes wryly). 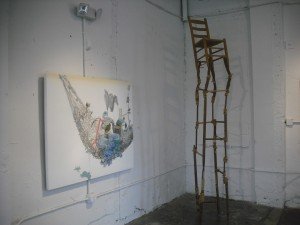 East City Art sat down with the curators during the hanging of Untitled to find out how the show came together.  Ms. Strupp and Mr. Maizels began without preconceived notions, preferring to let their meetings with artists guide the thematic development (hence the nondescript “Untitled”). The show’s overarching theme — an examination of the kinetic forces that flow between individuals and their environment(s) —  coalesced through conversations with the participating artists and their associated scholars.  The curators’ statement frames this dynamic within the context of 200 years of art history, highlighting the notion that art, as an “elucidator” of this “invisible energy of things”, is an out-branch of German philosophy (think Freud) and the Surrealist movement on the early 20th century — heady ideas for an MFA gallery show.

The eight artists, working in a variety of mediums, were invited to participate and each has provided several works to frame their ideas.  The curators have distributed the pieces throughout both rooms of the gallery, encouraging patrons to experience the works in tandem. While each artist deals with these unseen forces, the dominant subtext is how these forces interact within the domestic space of the home.  For example, the installations of Tracy Spenser-Stonestreet identify the home environment as a source of potential tension replete with feminist overtones.  Untitled (Sofa) presents us with a sofa whose stuffing has been eroded over time by constant use.  The hole, roughly buttock-shaped, directly connects our flesh to this eroding “landscape”.  In a similar vein, the piece Tower utilizes a common furniture piece to comment on the often tenuous relationship between father, mother and daughter. 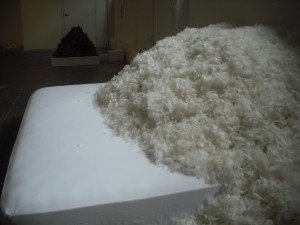 Travis Donovan explores this theme most overtly by introducing mechanization into his works on display. From afar, Smolder appears as a simple pile of debris.  As the viewer approaches, a subtle scent wafts through the air and hints of smoke lift from the piece, revealing that this is a pile of decaying tobacco leaves.  Here Donovan, who hails from South Carolina, uses a genteel cultural symbol from the South to examine cultural shifts in our relationship to consumerism and commodification. Similarly the piece Molt, a mattress covered in a pile of down feathers subtly vibrates, giving “life” to the erstwhile decaying installation. 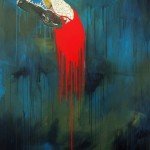 Also noteworthy are works by Chris Musina, whose paintings and installations examine the influence of folklore on a culture’s collective psyche, often with bloody results. The larger-than-life painting Wolf of Ansbach (To Our Dearly Departed Burgermiester) uses Germanic folklore to distinguish “the mythology behind societal beliefs”.  Likewise El Lagarto the Conquistador (Florida ’88), prominently displaying a severed alligator head, mythologizes another incident of an “animal… defying the cultural instituted limits of human habitation”.  Taken as a whole, Musina’s works illustrate how our culture deals with the dichotomies between urban/rural and animal/human over the course of time.

Some of the artists’ works were not as easily intuited.  One of these artists is Will Machin, and luckily he was on-hand to discuss his work and provide more thematic details.  Machin’s works walk the line between sculpture and installation and utilize the detritus of modern society to document a specific moment in current (cultural) time he 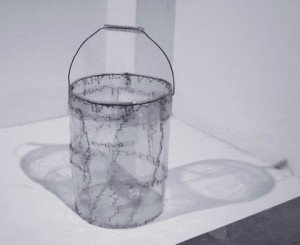 “5 Gallon”, Will Machin. Image courtesy of the curators.

identifies as simultaneously “modern, postmodern and neo-primitive.”  He points to 5 Gallon, literally a five-gallon container formed from repurposed plastic bottles, as an example of an object that is primitive in our society yet relevant in many non-Western cultures.  While not an ecological artist per se, his work does comment on our interactions with nature.  He summed up this interaction by saying, “our world may define us more than we like to believe.”

Untitled is a gem of a show and is a must-see for art lovers interested in surveying the region’s newest talent.  The show runs through August, 13th at Industry Gallery before traveling to Charlottesville, Virginia.  For more information about the exhibition click here .

Perhaps better known for his large neon light public-art, over the course of the last ten years, Kraft has also worked on several series of works sized for the gallery. Emergency Neon is a continuation of this practice and addresses pressing issues of our time such as gun violence, climate change and war.

Assembly 2022 features the work of 12 artists from across the country. Responding to many current issues, the artworks highlight how the events of the past three years have caused many of us to question the pre-2020 world and think about alternative ways of being and doing.

Currently on view at Brentwood Arts Exchange, group exhibition Here Not Here considers the paradox of how memories endure so concretely while taking no physical form.

December 16 is the last chance to see IceBox Collective’s The Nomadic House Project: Clouds at the Mexican Cultural Institute before it heads south of the border to Culiacán, Mexico. The work is part of an ongoing series that addresses the larger underlying issues impacting contemporary societies. This iteration of The Nomadic House Project tackles the issue of immigration.

By Lucy R. Lippard | Garon’s multimedia show, now traveling, is an innovative and relatively new expansion of context and content which could have stood on its own as art as art, but Garon has taken on a far deeper task with art that can be amplified by its sources, market, and cultural impact—both negative and positive.