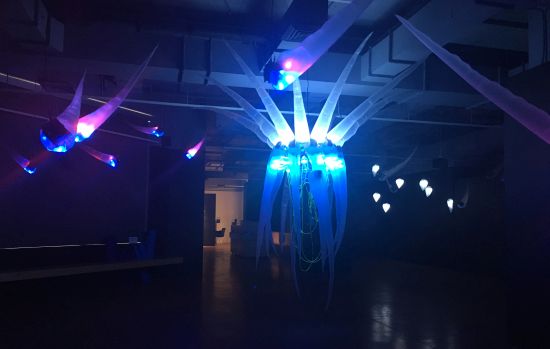 In the beginning there was darkness.  I don’t know if  New York-based artist Shih Chieh Huang was thinking in biblical metaphors as he planned his newest installation Synthetic Transformations—now on view at the Greater Reston Arts Center—but the almost pitch-black gallery upends the viewer’s ability to perceive space or distance, rendering us perhaps a speck of matter within a vast universe.  It is a yawning void meant to be experienced and felt rather than merely observed.  This blank slate thus serves as a perfect metaphor for Huang’s futuristic creation narrative.  For Huang has his own theories about life—how it begins, develops and then sustains itself.  Working at the intersection of sculpture, science and engineering, Huang’s Synthetic Transformations envisions a world in which computer-based technologies develop in ways that eerily mimic the biological environment in which they are housed.

Here the long journey to creation begins with a footstep.  Your cadence is invisibly captured by Brain, the 36 DMX Channel computer-cum-maestro which electronically breathes life into the gallery (Huang has titled each component within the installation).  To your left are the spinning BTBs (Breathing Trash Bag) which glow and pulse as they “breathe” in and out.  Forward and to the right of you are the T-1s (Tentacle-One), a sort of single-celled protozoa that undulate in the air as if swimming along invisible currents. 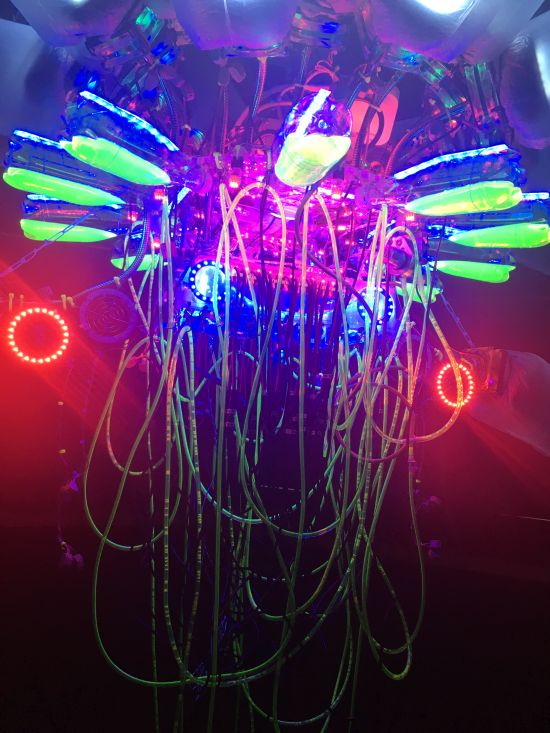 At the center of it all is the installation’s largest component, the T-24-L (Tentacle-24-Liquid).  The closest biological analogy would be that of a jellyfish (this is the first of many marine metaphors you might find yourself considering).  It at once appears as a higher life form to the T-1, with its ring of multitudinous tentacles that randomly rise and fall.  But sheathed by these tentacles is a central body of sorts replete with wires, receptacles designed as organs and tubes of oozing liquids that approximate a rudimentary circulatory system.  The central being is controlled by its own “mini-brain”, if you will, tied into Brain at the front of the gallery.

The installation approximates life on so many levels—from microscope slide to vast sea—that it is difficult to get one’s bearings (yoga mats are provided should you care to lie on the floor and collect your thoughts).  The installation provides more questions than answers as well.  Are the T-1s the detritus of the T-24-L or progeny going forth to spawn new life?  Do the BTBs exist in symbiosis with the T-24-L or is their relationship antagonistic?  Laying on the floor, I am left to wonder, do these floating bodies communicate with one another? 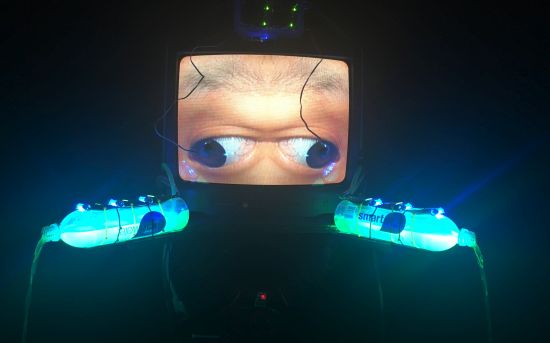 Huang invites all these questions with an attitude of mirth, suggesting that like biologic processes, the development of ever-advancing, computer-based systems is both gloriously messy and infinitely wondrous.  Indeed, the installation forces us to consider the ways in which electronics today are beginning to coordinate functions much the way groups of cells do on an anatomical level.  An earlier work on display elsewhere in the gallery titled Eye Fountain (2007) hints at Huang’s line of thinking.  Its Tony Oursler-inspired eyeballs wired to computer-animated tear ducts demonstrates Huang’s interest in how our biological and electronic worlds are beginning to not only collide but merge.  Synthetic Transformations accelerates that line of thought, forcing us to wonder if in the future, computers will need us at all to survive.

Synthetic Transformations is on display through November 19, 2016 at the Greater Reston Arts Center.  For more details, visit the gallery’s website here.