Ellen Cornett’s models seem as devoid of ego as William Wegman’s dogs. They droop and arch obediently in whatever pose is demanded. With notable exceptions, they gaze patiently and impassively out at the viewer or off into middle distance.
.
The name of the show, Juxtapositions, reinforces that sense of set poses. Cornett adds another layer by titling her works with names that derive from fairy tales, operas and legends. These titles can be as specific as, “Siegfried and the Rhinemaiden,” or as vague as, “Witch’s Bicycle.” Then there is the “Madonna;” not so vague.
.
All but several of the works in this show are densely colored chalk pastels with charcoal outlining. Cornett has also included several pen and ink drawings that depict her models with the same sweetness and control but with their own late Nineteenth-early Twentieth Century flavor.
.
When pondering these works it is pleasant to know a little about the models themselves. Two of the most often used are named Roxi and John Aaron. Cornett is profoundly devoted to them. It becomes clear after viewing a couple of the pictures that Roxi and John Aaron are willing to be posed and assembled into any convergence of images that the artist dreams up.
.
Cornett applies her pastels on top of a heavyweight paper (her current favorite is BFK Reeves) first toned with “Storm Blue” colorfix pastel primer which has a bit of grit in it. In doing so, she harkens back to her love of printmaking and woodcuts. She is creating a sense of something coming through the process, negative to positive.
.
There is another “juxtaposition” in the way pastel is rendered to produce the many sheep in these works. Her technique is realized most fully in Sheep on Wheels, one of the stars of the show. A “flock” of sheep stands in a field each posed on top of a red four-wheeled box. The eye moves immediately to the light and shadow of the sheep fur. It has a volatile figure-ground relationship that I noticed even in a JPEG sent to me by the artist prior to the show. 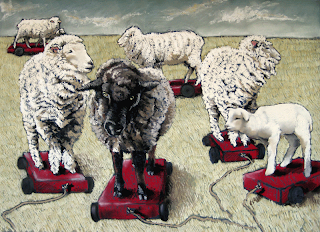 Ms. Cornett builds up all of the light from that dark and stormy blue gray. It’s a murky color, a color of stone, natural darkness. When you look closely you see the strokes of pastel and understand how each tuft was applied. From a distance the optical effect is striking. She creates a three dimensional illusion. A lone gray lamb is the exception that proves the rule having none of the three dimensionality of its elders.
The background light also is appealing. It looks like flat studio light in a natural setting. These sheep conspire to look like they are posing in a studio set with even north light instead of being out in the open. Cornett’s control of light makes your eyes move in unexpected ways having no reliable horizon and no reliable light source.
.
Another sheep nearby is joined by a rooster perched atop a bicycle seat in “No Bicycles,” and there is a rat in the lower right-hand corner who may or may not be Ratsina. Ratsina is a diva among Cornett’s inanimate models. She appears in several pictures in this show including La Mort De Ratsina, a small pastel rendering of the melodramatic final tableau of an old-world marionette show. Several mourning characters encircle the heroine. Her little wooden parts lie broken and lifeless on the floor. Two feral little teeth poke out above her costume of white pearls and a blue sash.
.
The artist explains that Ratsina began as a lowly crowd extra in the Pied Piper of Hamelin (starring John Aaron, of course). When all the rats she modeled for studies looked too cute, Cornett turned to images of actual rat corpses. Seeing the exposed teeth and claws and the shrunken bodies hanging, she was struck by the thought that a rat marionette would achieve the same effect. In assembling scrap wood for the body, a blue sash appeared and suddenly Ratsina was transformed into debutante. This explains why she is never without her tiny purse and pearl necklace.
.

In Pinocchia and Peter Rabbit, Pinocchia (played by Roxi) is tied with ropes to mimic marionette strings. Her pose suggests being held up or even confined by the strings. You can’t tell whether Pinocchia is about to kick Peter Rabbit or whether the strings are holding her back. Perhaps Peter Rabbit has the advantage. He looks like he’s a big piece of stale chocolate but he is actually make of concrete. He’s a lawn ornament.
. 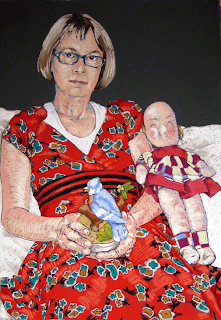 Juxtapositions is on display at Studio H until June 11. Studio H is planning a happy hour to close the show Thursday June 10 from 6-8pm. Studio H is located at 408 H ST NE, Washington DC, 20002. For more info contact the gallery at info@studiohdc.com . Hours are by appointment.