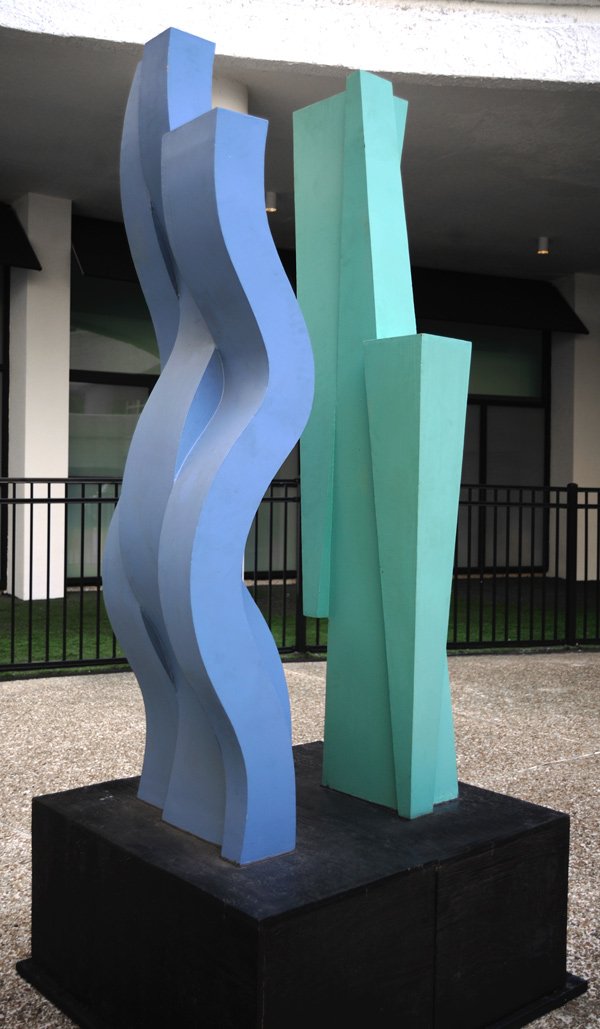 The majority of Nancy Frankel’s work in the show now at the AU Museum, Nancy at Ninety, are small and medium sized abstract forms on pedestals. This exhibit, curated by Claudia Rousseau, looks back over seven decades of Frankel’s work, and includes drawings and tempera painting on paper such as Passages, 2003, as well as larger freestanding sculptures. Rousseau describes Frankel’s work as “having a youthful spirit of invention, something akin to improvisation in music”. Frankel’s use of materials and subject alone holds its own history of post WW II abstraction and applied design from the 1930’s to the present day, and Frankel seems to touch on it all as a musician plays notes in variation.

Frankel, who was born in 1929, said during an interview that her work of the decades prior to the 1970s was almost “invisible” until she attended the 1972 Conference for Women in the Visual Arts, which was held at the Corcoran in DC*. This conference, allowed Nancy to submit images of her work to key slide registries at a time when there seemed to be a preferential slide registry favoring men. It was Frankel’s encounters with women leading to the 1972 Conference for Women in the Visual Arts , such as Cynthia Ann Bickley Green, Rosemary Wright, and Barbara Frank who – through lectures and late evening slide registrations – showed the women artists of DC “how” to participate in professional registries where their work would be seen by most curators. [1] The Corcoran was prompted to host the conference event after an outcry against no representation of women artists in the 1971 Biennial Exhibition. This first groundbreaking 1972 Conference for Women in the Visual Arts at the Corcoran had a further profound effect on Frankel’s sense of self-awareness as a woman artist

Her practice as artist however never leaned toward “feminine” subjects or materials but instead, was part of a broader dialogue in the visual arts about abstraction. Looking at Frankel’s work in this exhibition one cannot help but see a familiar late modern and post WW II visual vocabulary and methodology incorporated in what she calls her “organic geometric” sculptures. The work on view reflects the traits found in cubist works by artists such as Jacques Lipshitz (1891-1973), who used solid geometrical shapes to depict suggestions of the human form, and Julio Gonzalez (1976-1942) whose work is more open and spatially airy geometric iron and steel structures. Frankel often uses color in her abstracts that could have belonged to the Purist artist Fernand Leger (1881-1955). Naum Gabo (1890-1977) was one of the first artists to use the industrial material of “Perspex “or Plexiglas which is evident in Frankel’s construction of her work Suspension, 1978 – a year after Gabo passed away. Frankel worked during the same time as the De Stijl artist Piet Mondrian (1872-1944) and designer Gerrit Rietveldt (1888-1964) and her works reflect her deep connection to the design principles of the Bauhaus and its geometric and arithmetic proportions. When looking at the Untitled work by Frankel in wood and brass (1956) inspired by African art, one cannot help but wonder about its connection also to the elongated form of Constantine Brancusi’s Bird in Space, 1928. David Smith (1906 -1965) created his Cubi series in the early 1960’s which consisted of polished stainless steel geometric forms that he burnished in a very distinct way with steel wool. This burnishing action produced a very particular matte-reflective effect that drew attention to the sculptural surface. This exact burnishing technique can be found on Nancy Frankel’s Three’s Company, 2011; Clarity, 2010; and Impromptu, 2010. Using the visual abstract vocabulary of modernism and the 1960’s experimentation techniques in regards to her materials – wood, steel, stone, ceramics – Nancy Frankel’s work reflects the world she experienced, living in New York City, Munich, Germany, and then Washington DC.

One has to ask: where did Nancy Frankel’s bent toward what she calls “Organic Geometry” come from? In an interview with Jeff Cooper for the Washington Sculptor (2019:No 1Winter), Nancy Frankel spoke candidly about her time after high school, studying at the Tyler School of Fine Arts at Temple University in Pennsylvania. She stated that students were made aware of contemporary abstract work, but that the main emphasis was squarely placed on figurative subjects. Cooper indicates that Frankel went on to study at Columbia University in New York City, but says that it was not until Hans Hoffman came to New York City in the 1930’s from Germany that her interest in abstraction became pronounced. Hoffman emphasized the special dimension of color on the picture plane in the class Frankel took from him at his School for Painting in the Village. He made a lasting impression on her when once, during class, he tore her work in pieces and rearranged the composition in a more dynamic way. Not offended, she was instead intrigued by this new approach to looking through the lens of abstraction.

In 1958 Nancy moved to Germany, where she was able to attend the Munich Art Academy for a semester. In the same year the painter, Jean Deyrolle, was one of the first foreign artists appointed to teach at the academy during the post war period.[2] Jean Deyrolle was a featured member of the Abstraction – Création, Non-Figurative group, in a group show at MOMA in 1977.[3]  Through her experience in Munich, and her further exposure to formal art elements, the effects of abstraction stayed firmly rooted in Frankel’s work and environment during that time.

In her interview with Jeff Cooper, and in a later interview I did with Frankel, she recalls moving back to the United States from Germany and to Washington DC in the 60’s. Frankel says her time in Europe, away from NYC, made her feel slightly out of step. Frankel recalls seeing a Rauschenberg painting in a gallery window in Zurich Switzerland with a chair in front of it, and only upon her return to the States did she became familiar with the later phases of the Abstract Expressionist movement, realizing that the chair was, in fact-part, of the Rauschenberg painting.

All of Nancy Frankel’s work holds a quiet persistence. Her work remains grounded in abstraction. Studying at a time when education institutions, and the art world, did not welcome women, Frankel pursued her craft as sculptor with a great mindfulness of what was happening around her. Each of her works seems to represent a narrative in a three-dimensional journal entry, describing her Zeitgeist and her intellectual musing about art as a formal practice.

Nancy At Ninety runs through March 17, 2019 at the AU Katzen Museum. For more information please visit their website here.

*Errata: in a previous version the 1972 conference attended by Frankel was described as the “National Feminist Art History Conference” and has been changed to the “1972 Conference for Women in the Visual Arts” to reflect the exact title of the event.