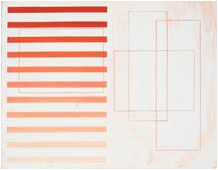 BETSY KAUFMAN’S paintings are downright alluring. They give us the satisfaction of being minimal but at the same time the visual veils, the ever so slight tilt and the application of delicious concoctions of paint, whose colors are simple but impossible to name, almost lend a heartbeat to the works.  In attempting to describe one of these paintings, one always comes up short. There is the structure/composition but then again there is the actual paint.  How do these two exist on the same plane? an In attempting to recall an cartist who’s minimal approach is surpassed by the quality of the painting you may have to think as far back as Malevich to find an artist who can do that with authority.  In an essay for Kaufman, Barry Schwabsky likens this duality to a couple who seem not at all suited for each other, he quoted Louise Bourgeois, who said about her marriage to Robert Goldwater that she was attracted to him because it was so much fun to seduce a Puritan
Betsy Kaufman has the ability to make the modernist grid her own.  The pieces have self-sufficient attitude and beauty.  The works allows the viewer to partake initially of the satisfaction and then of the joy in their making.

ODILI DONALD ODITA is a good 10 -15 years younger than the two other participants of this show.  Yet, he had an early start, at the age of 8 in Nigeria, he was preparing rabbit skin glue for his father, his first art teacher, and a prominent member of the postmodern avant garde.  His education is thus firmly grounded in modern art history.
His education at Ohio State and then Bennington sent him solidly into the postmodern debate of the 1980’s.   Yet the allure of artists such a Felix Gonzales Torres offered a special fascination for him, as an artist who can be minimal and political at one in the same time.
Odita is interested in the double-ness of being, of multiple perspectives in vision and experience. As a person growing up in both Africa and the US, Odita’s work is expressed in bifurcated and sectioned spaces/realities.  The artist feels like he is ‘representing a particular aspect of the third world experience in the Western world. ‘  And he insists that ‘realness’ exists in abstract art.  His use of form, color and space overrides the reality of space and the viewer’s perception.  Although the work is devoid of imagery, it is representational.  It is the meeting point of the inner and outer worlds of the painting
Of the two paintings on view one is on canvas, a traditional support, that  poses an immediate response to and communicates with the architecture.  The second piece is painted on black Plexiglas.  In this work, the space and form of color interact, heightening the conundrum of illusionism.  Plexiglas refers to industrialization and the color of this particular piece in its blackness refers to the color of skin, just as if it were red, white and blue it would refer to a social construct.
Odili Donald Odita is helping to change the world’s awareness of what a painting can be and how it can continue to exist. 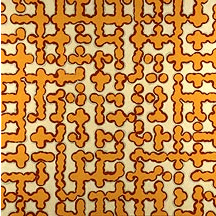 The description of W.C. Richardson’s paintings always begins with the subject of Geometry, and then as the painting unfolds, as the artist says, ‘the math become impure.’  The systems laid down as the first step have been tilted and repeated in odd numbers. They slip and continue beyond the surface of the piece.  These works, that can be so damned labor intensive and involved, are also haphazard or accidental in resolution.  There is no predetermined conclusion.  Richardson has a system, and has faith in it and in the process of painting: it is a way of life.

A spiral is the initial step, it is flat and it has volume and perspective.  These spirals are freely drawn and their interaction with the additional geometric structures is unpredictable:  a living dynamic field.  A juggling of priorities unfold as the painting proceeds creating a shifting sense of space, unstable, and a ‘breathing resolution rather than one that is clear and final.’  The most important change in the recent work has been an emphasis on the points or shapes created by the intersections of the various structural elements.  The many layers of paint are visible as texture and embossed-like patterns. The shapes created by the intersections can seem random in shape and in distribution. Given enough attention order appears – abstract geometry is there to guide the consciousness.

Off the grid, Richardson’s identity as an autonomous, self sufficient artist is proof that 30 years into the life as an abstract painter he had the fluidity and stamina to step into the contemporary, post industrial world fully armed.