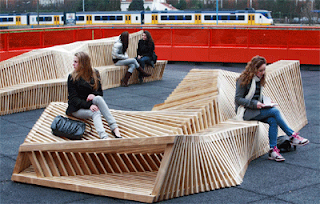 Industry Gallery will open “Hands On” March 20, 2010, 6‐8PM, the first solo U.S. exhibition for renowned and innovative Dutch designer Tejo Remy, a founding designer at the Droog Design collective, and René Veenhuizen, his design partner of the past decade. The exhibition will run through May 8 and will premier a prototype for a new series of poured concrete furniture.
Atelier Remy & Veenhuizen, based in Utrecht, the Netherlands, is critically acclaimed for its product and furniture design, and noted for using simple materials in strikingly original ways. “Hands On” will feature approximately a dozen works created from concrete, bamboo, tennis balls, and old woolen blankets.
“Hands On” includes several works based on Atelier Remy & Veenhuizen’s public and private commissions over the past decade, among them: a picnic table and two benches, inspired by the “Leaf Furniture” originally created for a children’s health care institution; a large tubular bench made from tennis balls based on a series made for the Museum Boijmans Van Beuningen in Rotterdam; and, a geometrically irregular slat wood “Reef Bench” derived from a series created for a secondary school. The exhibition will also feature two “Accidental Carpets” made from recycled blankets, chairs constructed from wide bamboo slats (two of only six made), and a prototype from a new series of poured concrete furniture.
Remy & Veenhuizen prefer hands on experimentation and avoid designing with computer assistance. In their large, one‐room, light‐filled studio just outside the historic core of Utrecht, they bend, fuse, glue, and manipulate fabric, glass, wood, cement and other materials, creating, testing and fabricating new designs.  “When all the things with which we surround ourselves on a daily basis are seen as materials with which to build on further,” says Remy, “the world becomes one great toolbox.”
“Tejo and René continue to generate some of the today’s most inventive and talked about design work,” said Industry Gallery owner Craig Appelbaum. “They are endlessly experimental and their work continues to expand the vocabulary of contemporary design in provocative ways.”

Tejo Remy’s “Rag Chair,” “Chest of Drawers (You Can’t Lay Down Your Memories)” and “Milk Bottle Lamp” (all created in 1991) introduced the designer and his distinct vision to the world. The pieces rapidly became icons of contemporary design and established him as one of the leading figures of his generation. He graduated the School of Art in Utrecht, department 3d‐Design in 1991.

René Veenhuizen graduated the School of Art in Utrecht, department 3d‐Design in 1993 and is now on their faculty. After several years of collaboration, he formalized his design partnership with Remy in 2000.

Their work is exhibited internationally and included in the collections of the Museum of Modern Art in New York, the Los Angeles County Museum of Art, the Stedelijk Museum in Amsterdam, the Audax Textielmuseum in Tilburg, and other venues.

The Capitol Hill Art League (CHAL) proudly presents an all-media juried exhibit entitled “Far Away” opening on Saturday, February 11, 2012, from 5:00-7:00 p.m. at the Capitol Hill Arts Workshop, 545 7th Street SE.  The juror of the show is Marsha Staiger, painter and instructor at The Art League in Alexandria, VA.

The Brentwood Arts Exchange is holding the opening reception of ‘Rivers and Memories’ by E.J. Montgomery and Lilian Thomas Burwell. The exhibit features highly developed explorations into the expressive potential of color, space, and metaphor.

Opening Reception, February 4, 6pm to 8pm at G Fine Art for Ian Whitmore’s “The Devil, a Shadow, the Notice of a Small Falling Leaf”